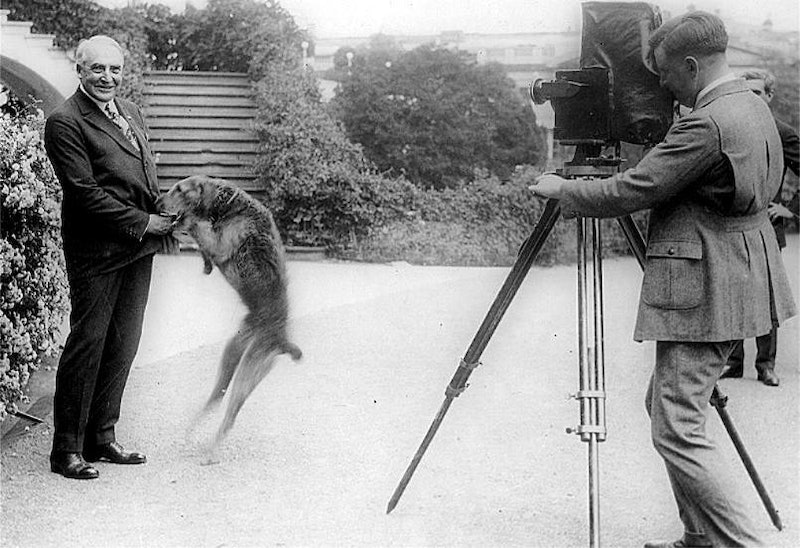 So by now we've all heard about the saucy lil' lovelife our 19th president had in office, right? Oh Warren G. Harding ye ole scalawag, you! Running around on your wife with your amorous feelings for your neighbor's missus, these new love letters of Warren G. Harding's will completely and forever change how people perceive his presidency. Where before lay a man who's largest claim to fame was dying in office, now there is a lecherous ol' coot — well, depending on who you ask.

The erotic-for-the-time, steamy-for-the-now love letters to his long, long, longtime mistress, Carrie Fulton Phillips, in the ten years before he was elected president in 1920 were recently exceprted by The New York Times Magazine following a 50-year agreement wherein their existence was hidden by the Library of Congress. And while the former president's adulterous relationship with Phillips — who also just so happened to be the wife of one of his closest friends, to add to the ¡escandalo! — may not have been much of a secret to folks in his hometown, it was to the rest of us. As was the admission that he called his penis "Jerry."

Which is exactly why the time is NOW, dear friends and Hollywood executives, to get the ball rolling on any and every Warren G movie pitch you can get your hands on. There really are infinite ways to go with this one. So! We've decided to do you a solid and craft 4 pitches — including actors! — that would surely be the sort of big hit that WGH's mini friend Jerry would be foolhardy to diss.

Title: 2 Years in the Oval

Summary: He went down in history as the "worst President ever," mostly due to his death while in office. But who was President Warren G. Harding really? From the makers of Masterpiece Theater comes PBS' television film 2 Years in the Oval, a look at the writings and policies of Warren G. Harding and the personal triumphs and victories that may just change your mind about the man that was, for the briefest time, President of the United States.

Title: And Jerry Came and Will Not Go

Summary: Talk about secret service of an entirely different sort. From the producers of Match Point comes a new sort of psycho-sexual affair thriller with a darkly comical edge. President Warren G. Harding once famously stated "I am not fit for this office and should never have been here," but in this dark new look, we finally see the full extent of what he meant. From a passionate affair to willful policy ignorance in the name of power and lust, And Jerry Came and Will Not Go documents his time in the White House ...after dark.

Summary: Poet. Lover. Fighter. Conflicted. President. Being the president can be hard — and not just on your political knowhow! Follow Warren G. Harding in the days (and nights, ooh la la) leading up to his stunted 2-year turn as the POTUS with the MOSTUS ...going on in the sack! Co-stars Suki Waterhouse as Nan Britton and Renée Zellweger as Carrie Fulton Phillips. Can't a President get a lil' love?

Summary: What does it take to be called the "worst president in history?" To hold the highest office in the land — effectively making you the most powerful man in the world — and still come away as nothing more than a governmental footnote? Michael Sheen stars as the man at the center of this critical, unbiased, hard-nosed look at what made Warren G. Harding the worst — and perhaps most surprisingly scandalous — President this great nation has ever seen.