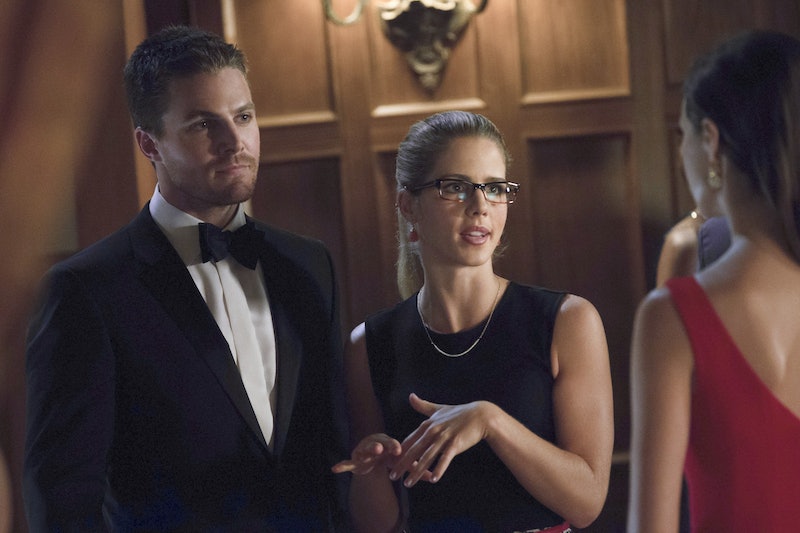 Olicity fans will have plenty to celebrate when the Arrow Season 3 premiere rolls around this fall, because it looks like Oliver Queen and Felicity Smoak will finally be going on a date. And here’s the craziest part — it actually seems pretty legitimate. For starters, The CW’s press site comes right out and says so in the premiere episode description.

"In the aftermath of this victory, Season 3 opens with Arrow now a hero to the citizens of Starling. Crime is down, people feel safer, and Captain Lance even calls off the Anti-Vigilante Task Force. Basking in his success, Oliver believes he can finally have a private life and asks Felicity out on a date. But the second Oliver takes his eye off the ball, a deadly villain reappears in Starling, forcing Oliver to realize that he can never be Oliver Queen — not as long as the city needs The Arrow."

Pretty crazy, right? Now obviously a significant amount of time has passed since Slade Wilson’s big attack on Starling City, especially given that Lance has now been promoted to captain, which (probably) isn't something that could be accomplished overnight. But more importantly, there’s the whole Oliver-Felicity date night to take into consideration. Last we saw, these two weren’t anywhere close to heading in a romantic direction. Perhaps this means Oliver’s fake “I love you” stunt carried more weight behind it than even he realized (though Olicity supporters have known it all along).

But before we launch our shipping celebrations into complete overdrive, let’s just take a minute to consider our options and discover how this latest plot twist could possibly play out for our favorite Starling City lovebirds-to-be. Let’s begin with the worst case scenario, shall we…

This wouldn’t be the first time the writers tried to fool us. That whole “I love you” bit that Oliver pulled during the Season 2 finale will forever be the source of many future therapy sessions. What if this whole date thing is a similar type of situation and it's simply a trick to make it seem like something's going on when it really isn't? Perhaps Oliver and Felicity are working undercover and using the ruse of a date to draw out their target.

The title of Season 3’s first episode is “The Calm” — as in the calm before the storm, which could indicate that a new villain is heading their way. This could be their way of drawing the enemy out, making the date nothing more than a means to an end. You've been warned. Plan your emotional freakouts accordingly.

Normally, one of the best parts of a budding romance is experiencing that slow burn between the couple involved — but with Oliver and Felicity we have yet to really witness much of a build up. Do the writers really think we’re capable of simply accepting their suddenly blossomed relationship as fact without ever getting to see how it got to that point in the first place? Sure, there have been a few sexually charged looks throughout the past two seasons, but not enough to understand Oliver’s desire to suddenly venture outside of the friend zone. This makes us think that the relationship just won’t last… and life as we know it will never be the same.

It’s Setting Us Up for a New Love Triangle

Brandon Routh recently joined the Arrow Season 3 cast and will portray the role of Ray Palmer — the DC superhero known as The Atom. But apart from being described as “an unparalleled scientist and inventor,” Routh’s character is also rumored to be a potential love interest for Felicity. Maybe the prospect of a little competition will be exactly what Oliver needs to bring his true feelings for Felicity to the surface — or it could end up driving them further apart than ever before (but we doubt it).

No, this has all the makings for a steamy new love triangle that should prove to be more than capable of holding our interest for the majority of the season. Plus, I'm sure Felicity wouldn’t mind two guys vying for her attention.

More like this
The 'New Amsterdam' Series Finale Opens An “Unexpected” Door To The Future
By Brad Witter
The 'Hunters' Creator Wanted The Series Finale To Serve As A "Catharsis"
By Brad Witter
This 'Gossip Girl' Wardrobe Error Has Gone Viral On TikTok
By Alyssa Lapid
'The Last Of Us' Has Officially Been Renewed For Season 2
By Darshita Goyal
Get Even More From Bustle — Sign Up For The Newsletter
From hair trends to relationship advice, our daily newsletter has everything you need to sound like a person who’s on TikTok, even if you aren’t.