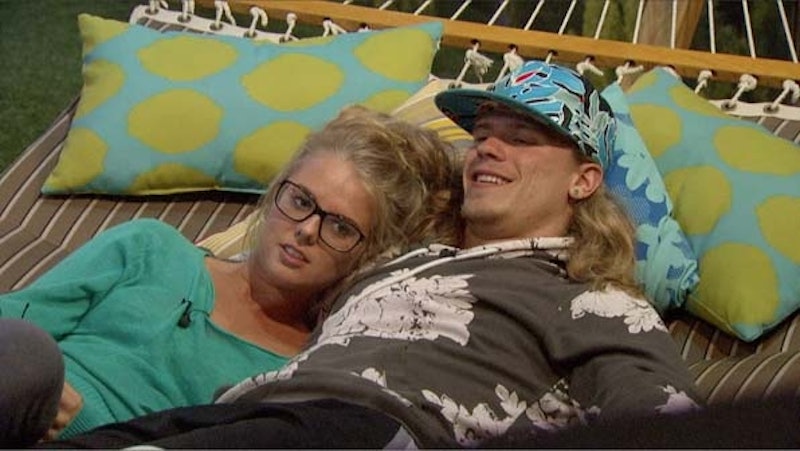 So far on this season of Big Brother, house guests Hayden Voss and Nicole Franzel have been circling each other like friendly puppies being introduced for the first time. Hayden has made no secret of his giant crush on Nicole and, though she hasn't been as forthcoming with her own feelings to him, she's admitted to other house guests that she's seriously into him. At this point in the game, it's not a question of will they or won't they but a question of how they and when they. After all, Nicole invited Hayden into her alliance with Christine and Hayden has already stated his desire to take Nicole out on a date. If that doesn't scream show romance, I don't know what does.

The thing is, Hayden and Nicole are just genuinely compatible. They're both down-to-earth and quirky people and fans have already begun affectionately referring to them as "Haycole". Hayden's so smooth he's making fans want one of their very own, between giving Nicole massages, asking her when they're going to make things "offish", and confessing that if she was his nurse then he'd fake sick all the time. Nicole enjoys playing hard to get — not to mention she seems more than a little camera-shy when it comes to this stuff — but they both seem to be enjoying what they have for right now.

So if you're not already aboard the Haycole train, it's about time you hop on it. After all, there are so many great reasons to make Haycole your showmance of choice.

1. They have fun with each other.

While Nicole was still wearing her frog costume from one of the competitions, she and Hayden had a lot of fun with it. The best thing they did was start playing leap frog in the yard like they were 5 years old, culminating in Hayden picking her up and swinging her around before they gave each other a bro-hug. As if they're bros. As if.

2. They practically live in that hammock.

Most of the house guests spend half their time in the hammock, but Hayden and Nicole have full-on hammock dates in which they cuddle out in the open for the whole house to see. They don't do it often enough for us to consider it "their hammock" yet, but it happens often enough that that hammock has seen a lot of the Haycole magic happen.

Nothing says comfort like being willing to sleep half on top of each other. At one point, Nicole was having trouble sleeping, so she went up to Hayden's bed and fell asleep peacefully in his arms. Taking naps together is becoming a regular occurrence for them now and they've had many a hilarious conversation in there. They even do it when there are other people in the room.

Nicole isn't exactly a depressed person to begin with, but she doesn't light up nearly so much as she does when Hayden is flirting with her. If she found that frog costume embarrassing, Hayden definitely made her feel better about it with his ridiculous puns and childlike smile.

5. They're hardcore flirting with each other.

Hayden is on a charm offensive and Nicole is playing hard to get and both of them seem to have an understanding that they like their relationship as it is right now. Nicole is flattered by Hayden's attention and Hayden loves chasing after her, but both of them are so respectful of each other's feelings and boundaries that it stays fun and not cruel or creepy. (Ahem, Caleb and Amber.)

6. Hayden asked her to marry him.

As we all learned from Dancing with the Stars' Maksim Chmerkovskiy and Meryl Davis, nothing says I'm-kidding-but-I'm-totally-into-you like proposing to a girl you just met. Nicole may have taken the ring and playfully tossed it at him, but she was also doing his hair immediately afterward and asking what his last name was, so we shouldn't rule a Haycole wedding out.

7. They always support each other.

Nicole's time as HoH hasn't been easy on her, but Hayden has been steadfastly there for her every step of the way. In fact, every time she's feeling down, he's right there with a hug and some encouragement to cheer her up. In return, Nicole hasn't been afraid to point to him as the person that she trusts absolutely in the house and there's no doubt that she would go to bat for him if she had to. Oh my god you two, just kiss already.

More like this
Clayton & Susie Broke Up, Citing "A Significant Amount Of Pain" After 'The Bachelor'
By Jordyn Tilchen
‘The Ultimatum: Queer Love’ Is Officially On The Way
By Radhika Menon and Kadin Burnett
Kendall Jenner Thinks Tristan Thompson "Wanted To Trap" Khloé With Another Baby
By Jake Viswanath
Here's Exactly When Rachel & Tino's Fight Happened After 'The Bachelorette'
By Grace Wehniainen
Get Even More From Bustle — Sign Up For The Newsletter