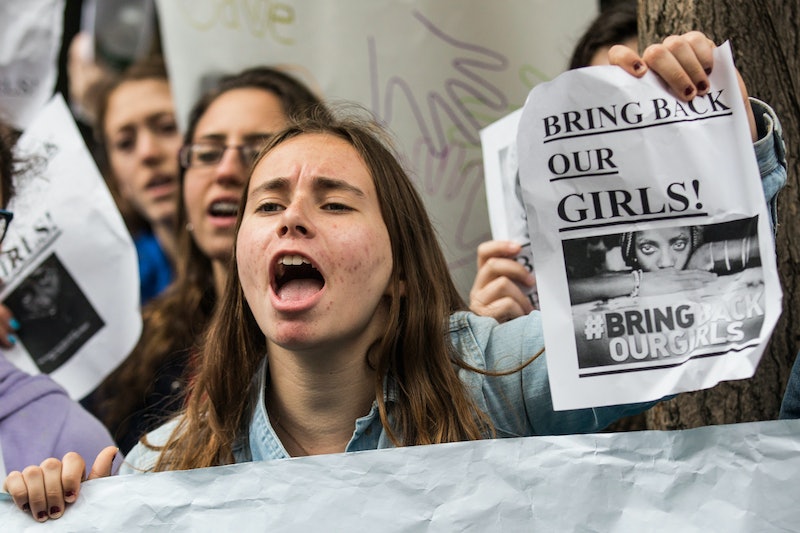 On Tuesday, Nigerian police detectives arrested Mohammad Zakari, a senior member of Boko Haram, in northeastern Nigeria. The 30-year-old, who has been dubbed the "chief butcher" of Boko Haram, is allegedly tied to murdering seven individuals, some of whom are women and children, as well as attacking customs officers in Kari during an April attack.

Zakari was caught trying to flee the Balmo Forest while Nigerian security forces were launching counterinsurgency activity. It's great Zakari was captured and it's a step in the right direction, but there's still much more to be done.

This arrest comes on the heels of a meeting between Nigerian President Goodluck Jonathan and Malala Yousafzai, who survived being shot in the head by Pakistani Taliban in 2012 and has become a symbol for anti-female terrorism. The two discussed how to bring back the hundreds of women and girls who have been abducted by Boko Haram during various attacks, the largest of which occurred at a school in Chibok. While some Nigerian girls have managed to escape, many more remain in captivity.

According to reports and statements from the Nigerian government, military troops have been sweeping the northeastern area of Nigeria in recent days, uncovering hidden weapons and uniforms that are worn by the country's security forces. Military troops have also seized individuals who are suspected to be terrorists.

Nigerian police say there are numerous Boko Haram camps throughout Balmo Forest in Bauchi where Zakari was arrested. Bauchi has been targeted during the group's rising insurgency, and the area has been utilized in recent years by Boko Haram. Throughout the past five years, the group has been accused of murdering more than 10,000 individuals.