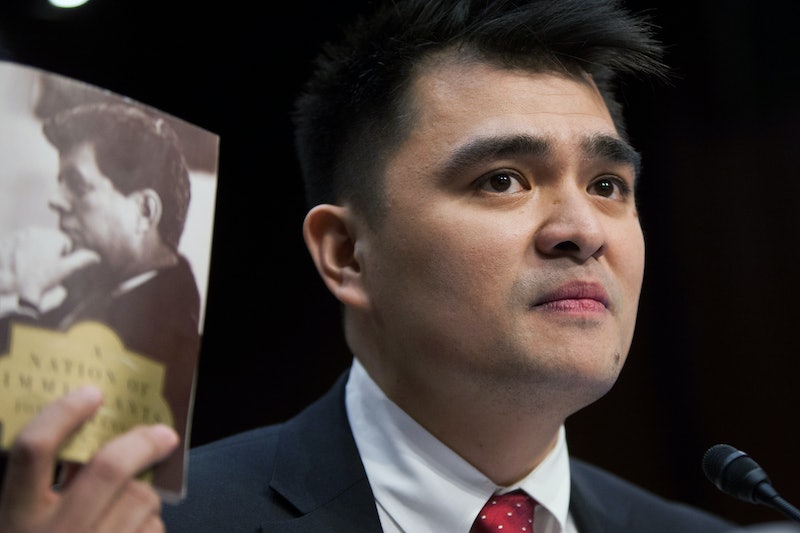 Award-winning journalist and high-profile undocumented immigrant Jose Antonio Vargas has been detained in Texas while trying to catch a flight out of the state. Now, Vargas been sent to the McAllen Border Patrol Station (according to DefineAmerican, an immigration activism group which counts Vargas as a board member). Basically, the U.S.' best-known undocumented immigrant is now in hot water, and it's far from clear what'll happen next.

When Vargas made the trip down to the Texas border to cover the surge of unaccompanied, undocumented children — who have been crossing into the U.S. increasingly often, since late 2011 to early 2012 — he was aware of the danger. As he explained in his recent piece for Politico Magazine, Vargas realized he might be in trouble upon arriving in McAllen, which sits right against the edge of the Mexico border, close to Texas' southernmost point.

In the past, Vargas had been able to get on flights relatively freely, using his Filipino passport in order to get through. But if his documents got any extra scrutiny, he'd be vulnerable, as closer examination would quickly reveal that he didn't have a valid U.S. visa.

... each flight is a gamble. My passport lacks a visa. If TSA agents discover this, they can contact CBP, which, in turn, can detain me. But so far, I haven’t had any problems, either because I look the way I do (“You’re not brown and you don’t look like a Jose Antonio Vargas,” an immigration advocate once told me), or talk the way I do—or because, as a security agent at John F. Kennedy International Airport who recognized me said without a hint of irony, “You seem so American.”

Vargas Came to America at Age 12, and Stayed For Good

Vargas flew to the U.S. from the Philippines in 1993, at the tender age of 12, sent by his mother to stay with his grandparents on the DL — he wasn't a citizen, and had no documentation to ensure his security.

This began a stressful and harrowing period of Vargas' life, though he didn't initially understand the situation, and didn't learn about his immigration status until four years later. He ended up spending his young teenage years in Northern California, not too far from San Francisco, and got into San Francisco State University on a scholarship. He was helped along the way by the two people at his high school he confided his secret to — his principal, and the superintendent.

He Got His Start in Journalism, While Still Hiding His Immigration Status

Vargas landed his first job in journalism with the San Francisco Chronicle, run at the time by editor in chief Phil Bronstein. Bronstein would author a somewhat prickly story after Vargas came out as undocumented in 2011, titled "I was duped by Jose Vargas, illegal immigrant." He described Vargas' work in his time with the Chronicle, and Bronstein's uncertainty about how to view a fact-finder who'd lied about his own background. Bronstein ultimately concluded that he should be forgiven.

Vargas left the Chronicle in 2004, and would land subsequent jobs at the Washington Post — where he was part of a team that won a Pulitzer for their coverage of the Virginia Tech massacre of 2007 — and the Huffington Post.

He Came Out As Undocumented in a Big, Big Way

When Vargas finally decided to reveal his status, following years of understandable stresses and anxieties, he decided to go big and do it in the pages of The New York Times Sunday Magazine.

In spite of the new risks the exposure laid at his feet, the public admission afforded Vargas a new, high-profile role in the immigration debate — he's now probably America's most famous undocumented immigrant — and he now believes that increased visibility actually affords him some level of security that he didn't have before. As he wrote for Politico:

... I’ve been the most privileged undocumented immigrant in the country. The visibility, frankly, has protected me. While hundreds of thousands of immigrants have been detained and deported in the past three years, I produced and directed a documentary film, “Documented,” which was shown in theaters and aired on CNN less than two weeks ago. I founded a media and culture campaign, Define American, to elevate how we talk about immigration and citizenship in a changing America. And I’ve been traveling non-stop for three years, visiting more than 40 states.

That's Not His Only Coming-Out Story

Long before he had any thoughts about revealing his immigration status, while still a student at Mountain View High School in 1999, Vargas came out as gay. While he now says that decision wasn't nearly as difficult as deciding to reveal his status, he doesn't leave one side of his identity at home while covering the other — he viewed the issues as linked in critically linked in his opposition to the Defense of Marriage Act, which was ultimately struck down by the Supreme Court in June 2013. As Vargas told HuffPost Live:

I can't marry my way into citizenship like straight people can. I can get married in the state of New York where I live, but because of the Defense of Marriage Act, the federal government, which hands out visas, won't recognize my marriage. ... It's not like you can choose. My being gay is not a social issue, it's a fact. It's not something to be debated. It's a reality.

Vargas knew it was risky trying to take a plane out of McAllen-Miller International Airport, but it wasn't as though he had any alternative — the roads out of the border town also feature immigration checkpoints.

It's a grim occurrence for Vargas at a time when, frankly, he should be feeling pretty good about things — his terrific documentary, Documented , aired on CNN just a few weeks ago. But, as the Washington Post reports, his relative ease in moving through other parts of the country left him unprepared and caught off-guard by the extent of McAllen's immigration checkpoints.

As Vargas reportedly wrote in a text to Washington Post reporter Ernesto Londoño over the weekend:

I feel stupid. I've been traveling around the country, visiting 43 states in like 3 years, and I've been flying using my Philippine passport. But I've never been to the Texas border area. I just figured I could use the passport. But apparently I can't because border patrol agents check foreign passports.

The ACLU describes it as the "Constitution-Free Zone," a stretch of 100 miles surrounding America's borders in which immigration checkpoints can demand documentation.