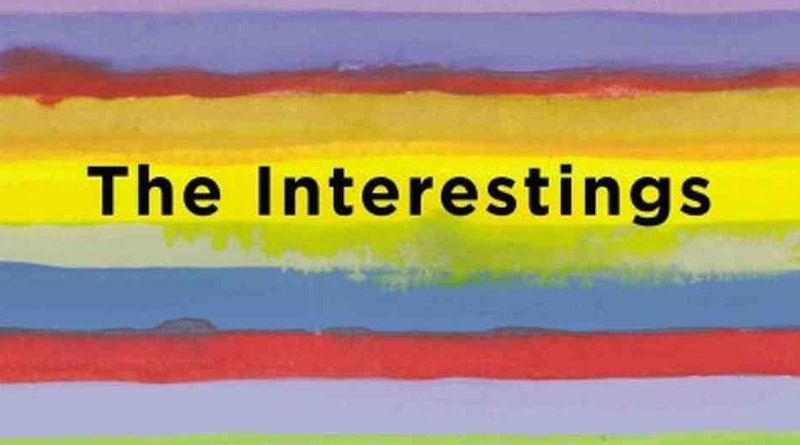 Meg Wolitzer's hit novel The Interestings has a wondrously simple plotline that slyly conceals a big, sprawling epic. Although it's ostensibly about a group of six gifted kids (the eponymous "Interestings") who meet at a '70s summer camp for gifted and creative kids, the book eventually spreads out to chart their lives and fraught friendships over the course of many decades. The book opens during their first year together at Spirit-in-the-Woods, but The Interestings is really about everything that happens after. And a lot happens after.

The book is colored by both its compelling use of history (it kicks off just before President Nixon resigns and spreads out to include a hefty number of other topical occurrences) and its indelible characters. Centered primarily on Julie — “Jules” after that first summer and never anything else — Jacobson, Wolitzer uses the new kid in camp as an entry point into the rest of The Interestings crew: the ethereal Ash Wood, her larger-than-life brother Goodman, the beloved but awkward Ethan Figman, the overly emotional Cathy Kiplinger, and the enigmatic Jonah Bay. How the six tangle together (and, in some cases, untangle) over the years frames the narrative of the novel. Wolitzer’s seamless sliding between time periods and dedication to crafting characters that feel real (even if that means making them often scan as less than appealing) elevates it to something very special indeed.

But if you’ve read (and loved) The Interestings and are hungry for more titles like it, there's more out there like it, depending on what exactly struck you from the book:

1. If you’re hungry for another novel about a friend group held together by both big intellect and even bigger lies, pick up Donna Tartt's The Secret History

If you've only read Tartt's Pulitzer Prize-winning The Goldfinch , you're missing out. The author has only written three books in her 22-year career, but her first is a strong competitor for best of the bunch. Set at Hampden College, a fictional Vermont institution based on her own alma mater (Bennington, where she started writing the novel), the book follows a tight-knit group of Ancient Greek scholars whose delicate friendships are thrown into major turmoil after they kill off one of their own. Oops!

Wolitzer's book similarly winds up to the reveal of a big crime and the revelation of some huge secrets, admirably holding tension even as we know the inevitable outcome. Tartt's overly intellectual characters are a fine counterpoint for the more eclectic Interestings, but they all suffer from the same problem: being too smart for their own good.

2. If you’re looking for another book about an offbeat summer camp populated by secret-plagued attendees, try Anton DiSclafani's The Yonahlossee Riding Camp for Girls

Spirit-in-the-Woods is both a location and a state of mind for the characters of The Interestings, so it's no surprise that the book often returns to the summer camp, thanks to both some necessary flashbacks and some very surprising narrative turns. DiSclafini's Riding Camp is a fair bit different than The Interestings, but its primary setting — a chi-chi riding camp and school for girls nestled in North Carolina's Blue Ridge Mountains — is evocative and memorable in precisely the same way that Spirit-in-the-Woods is. DiSclafini doesn't just pay special attention to place, either, she's just as caught up in time as Wolitzer is, and Riding Camp takes place in the early days of the Depression, a nationwide upheaval that impacts the camp's various attendees in different ways, just like Nixon looms large over the kids of The Interestings. The book's central character, the mercurial and needy Thea Atwell, even comes to camp with her own secrets to spare, and while the unfolding of her own narrative isn't as exciting as the ones that reveal themselves across the course of The Interestings, the books' similarities are still strong, and the pair make a fine double feature.

3. If you want to read more about life in New York City in the '70s and onward, check out Renata Adler's seminal Speedboat

Wolitzer's novel spans several decades, but the meat of its post-camp action takes place in New York City in the '70s and onward. As the Interestings try to make their way in the dangerous, daring city, Gotham comes alive around them — always bright, always bold, and quite often exceedingly disappointing. Adler's classic Speedboat similarly explores life in the big city in the later part of the '70s, vividly bringing to life all the excitement and terror of attempting to carve out a intellectually-driven existence (in the case of Speedboat, our main character is a budding journalist) in a city that doesn't care much for sympathy.

4. If you're seeking out another book about fraught female friendships, grab Mary McCarthy's classic The Group

The Interestings aren't the literary world's only sharply named group made up of big-time strivers and tension-laden friendships. McCarthy's The Group is loosely based on McCarthy's own experiences at Vassar College and in her post-graduate years, and it follows eight very different friends as they embark on their adult lives. Wolitzer's book gives equal attention to the various relationships that weave throughout her narrative, but the relationship between Jules and Ash is one of its most compelling. The pair fiercely bond as only teenage girls can, and that bond is put to the test throughout The Interestings, thanks to both common calamities and shocking secrets. McCarthy's novel is all about the essential nature of female friendships, even as they often prove to be more heartbreaking than any romance. Jules and Ash probably should have read this one.

5. If you're stuck on the unrequited love between Ethan and Jules, seek out Lionel Shriver's The Post-Birthday World

Before Jules really finds her place within the group, she finds her place in Ethan's big heart — even though she doesn't really want it. Although the pair's romance is remarkably short-lived, Ethan never quite gives up hope on Jules. Um, even after he marries Ash and the pair become fabulously wealthy and famous and Jules finds her own husband outside the confines of the Spirit-in-the-Woods clique. Awkward. Ethan's dedication to Jules, and his frequent desire that things had turned out differently when they were teens, is one of the most aching elements of Wolitzer's novel. If you're stuck wondering "what if" just like Ethan, consider picking up Shriver's The Post-Birthday World, which works as a kind of mix between the pains regular old unrequited love and the weird pleasure of Sliding Doors. What if that love worked out? What if it didn't? What if you could see both sides?

6. If you want to read more about smart kids and the scrapes their brains get them into, dive into Marisha Pessl's Special Topics in Calamity Physics

The Interestings are, well, interesting, but they're also smart and creative and cool and bound for greatness, sort of like the Bluebloods of Pessl's dynamic debut novel. Much like The Interestings, we're introduced to the complicated and complex group through the arrival of a new member — the awkward Blue van Meer. Even better? There's also a big mystery at the heart of this novel, and enough pop culture nods and literary allusions to keep it chugging right along.

7. If you just want to read more Wolitzer, start with the author's The Uncoupling

Wolitzer published eight novels before The Interestings hit shelves in 2013, and each one is better than the last. If you're looking to get still deeper into Wolitzer's bibliography, pick up The Uncoupling, the novel she wrote just before The Interestings. A modern take on the Lysistrata story (that's the Greek comedic play about a city filled with women who withhold sex from their men in order to stop a war), The Uncoupling is wry and witty in the same way that The Interestings is, with a literary backbone that will keep the creatives happy. Other solid Wolitzer picks? The Wife and The Ten-Year Nap.