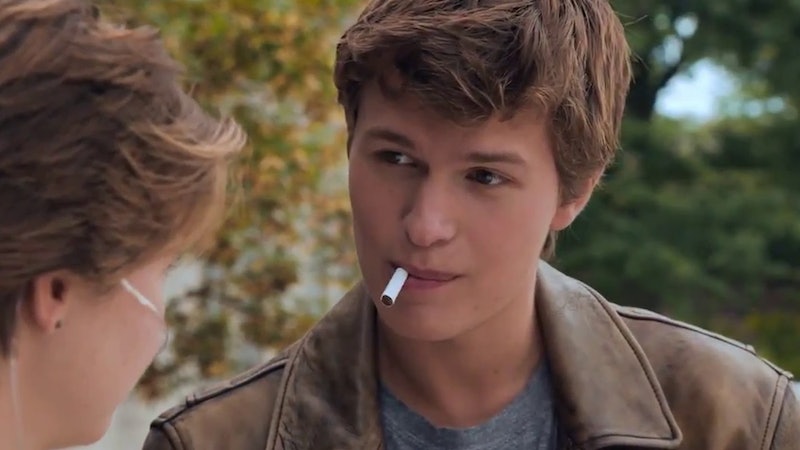 How sick are you of talking about metaphors? John Green's The Fault in Our Stars premiered a little over a month ago, and here we are, still talking about Augustus Waters's cigarettes. TFiOS ' "It's A Metaphor" memes swept the Internet leading up to the film's release because everyone loves a good pun...and Ansel Elgort. On Wednesday, a literary fan questioned the novel's author about whether or not Gus's metaphor is really a metaphor, and John Green claimed that Gus was wrong about his metaphor. And while that sounds like a riot waiting to happen, it's actually okay for Gus to be incorrect in his comparison.

The TFIOS fan asked Green to explain how and why Gus's metaphor isn't just an example of situational irony, or a simple statement. In response, Green comes to the conclusion that Gus, for all intents and purposes, is wrong in his assessment of the unlit cigarette. But Green also gives an excellent reason why we shouldn't judge Gus's understanding and use of the literary term as a coping mechanism for his life.

First, here's the thing about Gus — he's a teenager. Green writes to the fan, "Gus’s intellectual grasp often exceeds his reach (he calls a monologue a soliloquy, and misuses quite a few of the bigger words in his vocabulary)." Just because Gus is a teen living with a terminal disease that he can't control doesn't exactly make him an expert philosopher or literary genius (he admits to this in his letter to Van Houten) or even a scholar. So the character we're meeting here probably just learned the difference between metaphor and simile in his high school English class. If anything, this mistake makes Gus more authentic.

Green continues to explain that, though Gus is wrong, "the cigarette is a metaphor, albeit a different one for us than it is for him." For Gus, the cigarette is a metaphor for illness and while it remains unlit, he maintains the power over it. Green points out that Gus uses the cigarette in moments when he feels "nervous or powerless," like when he's experiencing the plane ride to Amsterdam. And in Gus's mind, by using a powerful known carcinogen, he's making a connection that humans can prevent cancer by not smoking. Thus, not lighting the cigarette allows him to control whether or not he dies from cancer.

This is where he's wrong, the TFIOS author explains. While humans can control illness and cancer to some extent (by not smoking, etc.) the majority of illness is uncontrollable. Green writes, "'You don’t give it the power to do its killing' imagines more agency over illness than we actually have, because in the end much of the fault is in the stars, not in ourselves." Making the unlit cigarette, to the rest of us, a metaphor for "our false perception of control" rather than one of our control over our fate.

So why is it okay for Gus to be wrong? Because a part of what fans, and Hazel, love about Gus is his conviction, even when his logic is a little shaky. His life hangs by a thread and yet we don't see him second-guess himself in anything he says or does.

It's authentic in its flaws and, even though we might not be able to identify with terminal illness, we can all relate to finding an idea or belief to cling to in our most difficult moments. Never mind whether or not it's academically correct.

More like this
These 25 International Horror Movies On Netflix Prove Fear Is A Universal Language
By Bustle Editors
What Reporting On The UK’s Most Prolific Cyber Stalker Taught Me
By Sirin Kale
'The Ex-Wife’s First Look Pics Are Giving 'Gone Girl' Vibes
By Bustle UK
The Most Anticipated Books Of October 2022
By K.W. Colyard
Get Even More From Bustle — Sign Up For The Newsletter