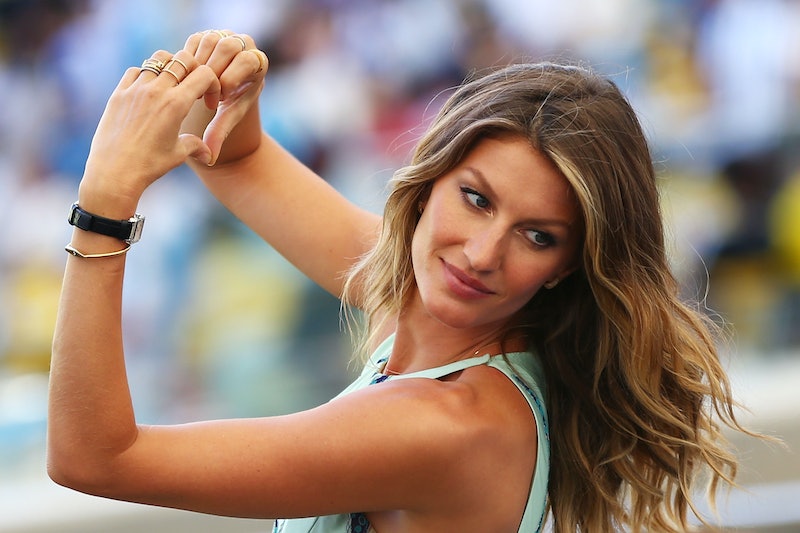 Here's some news that'll make you feel all sorts of things (read: jealous, upset, depressed, etc.): Gisele Bündchen makes more in one day than most do in an entire year. That's right. According to Forbes magazine, Gisele Bündchen made $47 million in the last year, which is about $128,000 on average per 24 hours.

To put things mildly, Bündchen has had a stellar 2013/2014. It's been the best 12 months in her entire 20-year-long career. But it makes total sense — the supermodel never seems to stop working. Everywhere you look, Bündchen is there. This last year alone, she's starred in campaigns for H&M, Chanel, Carolina Herrera, and Louis Vuitton. In fact, just this past weekend, Bündchen was invited by FIFA to unveil the World Cup trophy out of its monogrammed LV.

Bündchen has a lot to be proud about. Not only is she the breadwinner in the family (sorry, Tom Brady), she's also the only Brazilian to make Forbes's 2014 Celebrity 100 List. And while most would be happy about receiving the title, Bündchen isn't totally thrilled. She told Vogue earlier this year that all these figures are based on estimates. "It's sad, because the people who write these things don't have my bank account details." Bündchen went on to tell Vogue, "I do okay, I earn plenty, but not as much as they say. I've already been audited by the IRS because of this list and, truthfully, whether I'm on this list or not doesn't interest me."

Whether Bündchen is just trying to be humble or downplay the insane amounts of money that she makes, she is still one of the highest paid models in the history of models. And because it's an astonishing amount, I've decided to make a list of things that you could buy with one of her daily paychecks.

4. An Island in Fiji

7. A Massive Caviar Lobster Pizza Party at Nino's (with the world's most expensive pizza)