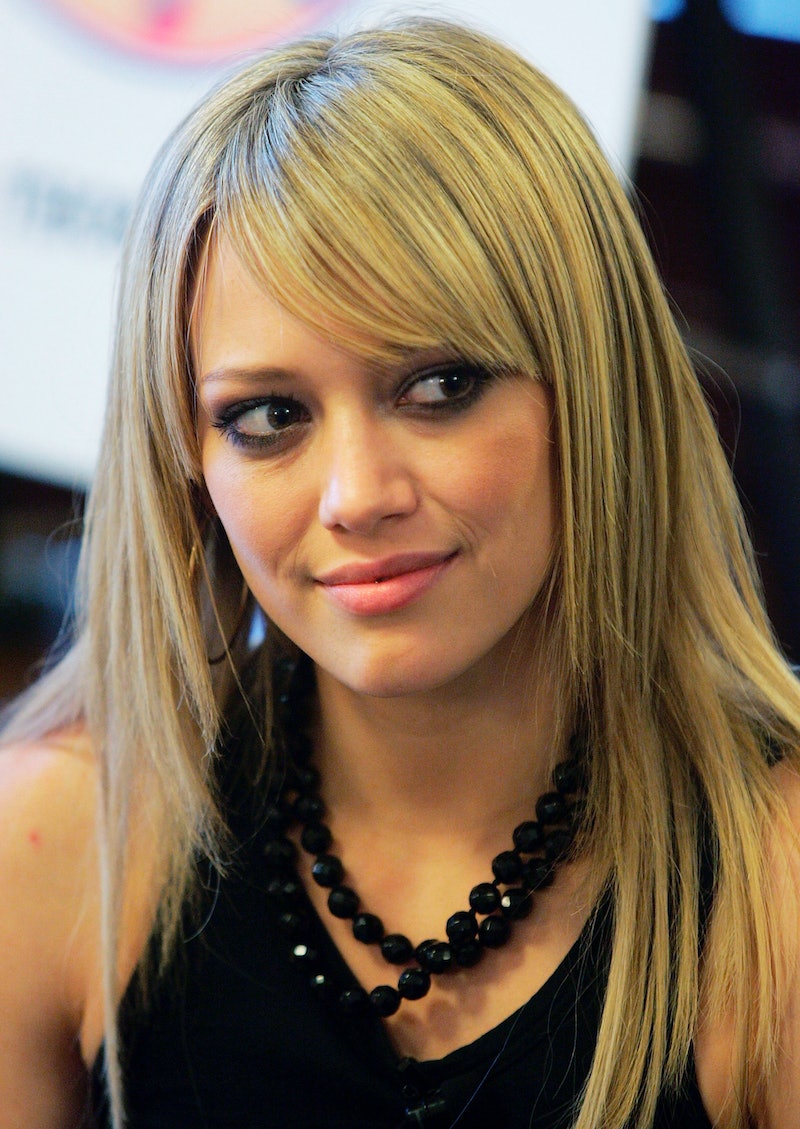 Wednesday is the 10th anniversary of the childhood classic A Cinderella Story . Debuting in 2004, the modern-day take on Cinderella was one of Hilary Duff's most popular movies during the peak of her career. Duff even won the Kids Choice Award for Best Actress that year, though critics widely panned the movie. But since audiences matter more than critics, I still remember the movie fondly 10 years later.

What was great about it was that Duff's character Sam wasn't the typical damsel in distress character. Instead she took charge of her own life and worked hard to get into Princeton. She also finally stood up to her evil stepmother (Jennifer Coolidge) which is more than the original Cinderella ever did. Sam didn't need a Prince Charming, she just happened to find one along the way. And when she did, she made sure he was the right kind of guy for her, not the other way around.

She had all kinds of great one liners like, "Waiting for you is like waiting for rain in a drought: useless and disappointing." And she was pretty sassy too like when the popular girl came into her diner to order something without sugar, carbs, and that was fat free. Duff quickly responded, "Water?"

So yeah, Rotten Tomatoes may rank this movie at a dismal 11 percent, but I loved it growing up. But it's not the only movie Duff has done. So where does this childhood favorite stack up against her 16 other films? Here's a definitive ranking.

Usually I'm a pretty big fan of sequels, but in this one Duff's part in particular sucked. What was charming teenage angst in the first film turned into adult brattiness when Duff refused to hang out with her family on their special camping trip. Plus this is right after Duff did whatever she did to her face and it hurt the teenager in me who had looked up to Duff and her achievable beauty in the first film.

YouTube commenters tell me that this movie is funny, but Duff's part looks horrendous. She plays a foreign pop-star with a terrible accent and in one scene she puts a scorpion down her skirt for no discernible reason. Based on her performance, it has to get a low scoring even if it does have John Cusack and Marisa Tomei in it.

Duff plays a southern belle whose family doesn't want her around a good for nothing boy. It's kinda like The Notebook, but not as popular—or good.

Unfortunately for Duff, she's no Rachel McAdams and she cannot play a convincing mean girl. Maybe it was all those years of her being the quirky protagonist, but I just can't see sweet Lizzie McGuire being the bully. Sorry not sorry.

If you ask me, Duff is a little too old to play a convincing teenager here, but the film does look engaging. Also Josh Peck is in it and how can you miss out on that?

After watching Duff play the dorky, quirky middle schooler for so many films it was hard to see her as the popular girl in Agent Cody Banks.

While young Frankie Muniz carried the film, Duff wisely opted out of the sequel.

The premise of this film is a man writes a script and tries to get it picked up by a movie star who happens to be Hilary Duff. This upsets his wife because she's a normal girl and can't compete with a movie star. I've simplified the plot way down, but in actuality it looks pretty good. Duff's part is small and since she didn't have a terrible foreign accent she's already doing way better than War, Inc.

Totally cheesy and totally adorable, this was Duff's first film and her little 11 year old self is too precious.

How can you resist the sister act of Haylie and Hilary Duff? The premise of this movie is that the two spoiled sisters lose their fortune and have to live like poor people. It's totally tacky and a little offensive at times but Duff is charming enough to make it not the worst film she's ever done. Besides it's way better than From Prada to Nada, a film with the same plot but far less impressive acting skills.

To find a wall street husband, Duff must pretend to work in finance while she's secretly writing a column about it for Cosmopolitan. While this is basically a How to Lose a Guy in 10 Days knock-off, it's charming in its own way. It's not the worst film Duff made as an adult.

Watching Duff play a truly troubled teen is interesting as she can't rely on her usual bubbly attitude. It's worth viewing if just to see Duff step outside of her acting comfort zone.

Duff plays a clumsy, artistic, fashion-forward teen sent to military school and hilarity ensues. While the acting is less than stellar; it's such a nostalgic Disney Channel film that you have to put it high up on the list.

Although this movie totally misrepresents my hometown of Flagstaff, Arizona, it's pretty good. It even has a twist ending: Duff doesn't win first place in the music competition. (Rightly so, because I love her, but she's not the greatest singer there ever was.) It's also a surprisingly dark film as Duff deals with the death of her teenage brother, which makes it more than your traditional Hilary Duff comedy.

There's something about a film where kids set their parents up that's just really entertaining. Especially when Hilary Duff does it because she plays the sincere daughter pretty well. Plus this one features Mr. Big from Sex and the City, Aunt Hilda from Sabrina the Teenage Witch, Kurt's dad from Glee, and Stick It's Vanessa Lengies as supporting actors so it's just a pretty good film in general.

3. CHEAPER BY THE DOZEN

I love everything about this movie. I literally got the DVD at midnight on Easter Sunday because that's when it came out. Duff's role wasn't huge in the film, but she had that annoyed teenager who secretly cares about her family part down.

I couldn't give this film first place, but it is still good enough to land runner-up on this list. Remember when Chad Michael Murray had a career? So. Much. Nostalgia.

This film made all my childhood dreams come true. Lizzie and Gordo finally kissed, Kate Sanders stopped being so mean to Lizzie, and the pop music was amazing. I have a lot of feelings about this movie because growing up I was Lizzie McGuire (read: dorky and overly into hair accessories) and this movie was a chance to relive those TV show memories one last time while seeing all Lizzie's dreams come true.

So there you have it. Every film Duff has ever been in. Do you feel super nostalgic and old now, or what?