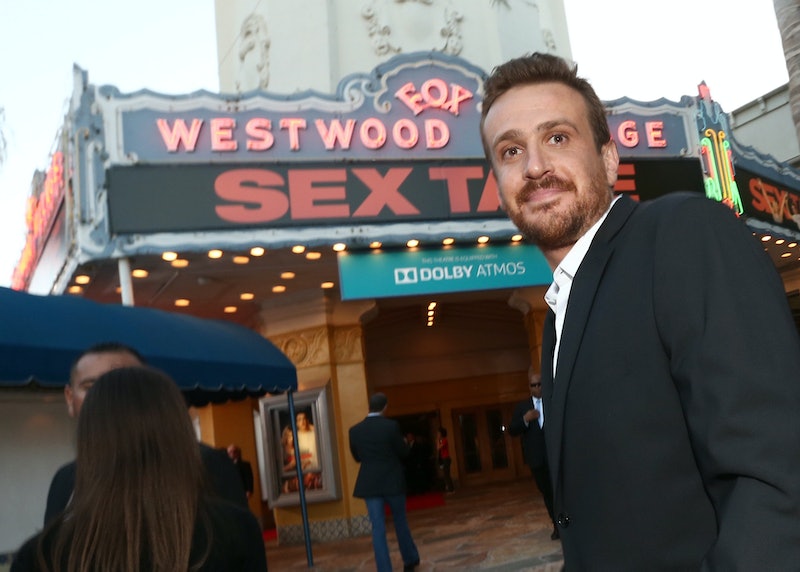 When one door closes, another one opens. This year marked the end of How I Met Your Mother, which means that after nine years, Jason Segel is no longer the lovable midwesterner-living-in-the-big-city Marshall Eriksen, a.k.a Marshmallow. But Segel, who turned 34 in 2014, has a new movie hitting theaters on Friday (the R-rated comedy Sex Tape ) and his first book, a children's novel called Nightmares! , which he co-wrote, that will be released this September.

For the past 16 years, the actor/writer — who first won fans over with his performance as the sweet, but dopey Nick Andopolis on the tragically short-lived dramedy Freaks and Geeks — has had a continually evolving career. While his stints on TV like Freaks and Geeks and Undeclared weren't the hits they should have been, Segel later found success on the big screen in critical and box office hits like Knocked Up and I Love You, Man. Of course, Segel's greatest accomplishments to date have been his own passion projects like Forgetting Sarah Marshall and The Muppets.

While Segel's personal life has made headlines from time to time (particularly his relationship with Michelle Williams) it's his on-screen work on the big and small screen that's turned him into a household name. Since we already gave the "Evolution Of" treatment to his Sex Tape co-star Cameron Diaz, now it's Segel's turn.

In the early 1990's/late 2000's, Judd Apatow had an unparalleled gift for discovering talent. Case in point: Jason Segel, whose only three credits had been in three comedies in 1998 (including SLC Punk! and Dead Man on Campus) and Apatow saw some major potential from a guy who fondled a watermelon in Can't Hardly Wait. Thank the TV gods that he did, because he cast the then-19-year-old Segel as the lovelorn stoner Nick on Freaks and Geeks.

The NBC series was a critical darling (it even won an Emmy), but it was sadly canceled after just one season from 1999-2000. Still, the show has since become a cult darling and it's produced some of the biggest names in Hollywood, Segel included. After Freaks and Geeks, Apatow worked with Segel again in his other short-lived, single-season comedy Undeclared from 2001-2002. In it, Segel played Eric, a guy obsessed with his ex, which would turn out to be a little bit of a trend for the actor.

Freaks and Geeks would ultimately be the launching pad for Segel's career, but it was How I Met Your Mother that would make him a bona fide television star. In the mid-2000's the actor had just a few credits during that time period, including stints on Alias and CSI, but HIMYM would change all of that. While his co-star Neil Patrick Harris was arguably the star of the show, Segel's performance as the adorable Marshall won over fans and critics alike. (Segel received praise for the episode in which Marshall learned that his father passed away.)

Segel once again reunited with Apatow — and a few other Apatow alums including Seth Rogen and Jay Baruchel — for the smash 2007 comedy Knocked Up. While Segel still wasn't a leading man, he made an impression on audiences with his hilarious, raunchy one-liners as the flirty, funny Jason in the flick. Knocked Up remains Segel's most successful non-animated film to date, making $148 million at the box office.

Jason Segel may have had his break because of Judd Apatow, but he made his own career the one it is today. The actor starred in and wrote the 2008 comedy Forgetting Sarah Marshall. Not only did he earn raves for the movie (especially from female audiences who were happy to see a guy going full frontal for once), which was reportedly based off a split he endured in real life, but it earned over $100 million at the box office worldwide. Segel went on to do well in a variety of movie genres such as bromantic comedies (2009's hilarious I Love You, Man with Paul Rudd, who he conducted some particularly memorable interviews with), animated (he voiced Vector in the smash Despicable Me in 2010), indie (as the titular Jeff in 2011's Jeff, Who Lives at Home), and R-rated Cameron Diaz comedies (2011's Bad Teacher, which may spell good things for Sex Tape).

And while Segel had memorable bit parts in comedies like 2012's This is 40 and 2013's This is the End (though there were some less memorable parts, like in the 2012 dud The Five Year Engagement) his biggest achievement during this era was bringing his longtime passion project of bringing the beloved Muppets back to the big screen. 2011's The Muppets, which Segel starred in and co-wrote, is his best-reviewed film to date (a whopping 96 percent on Rotten Tomatoes) and an Oscar-winner.

2014 and Beyond: A Versatile Career Carries On

Depending on how Sex Tape and Nightmares! do, 2014 could be a bittersweet year for Segel post-HIMYM, but the future holds Segel's most daring, if not controversial career move yet. Segel is playing David Foster Wallace in the already hotly-debated biopic The End of the Tour . But whether he's playing literary legends or belting out Broadway tunes with his famous buddies, Jason Segel has proved himself to be one of the most likable leading men in Hollywood, on and off-screen.

We love you, man.