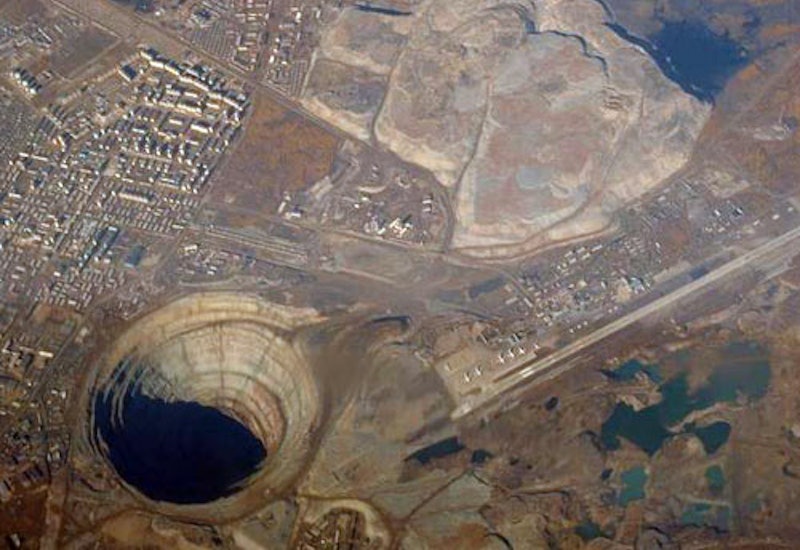 So, you're sitting around, minding your own business. Suddenly, you take a look outside your window, and what do you see? Nothing but a ginormous hole, 262 feet in diameter. Well, believe it or not, that just happened for those in Siberia: an obscure, giant hole suddenly appeared. Out of nowhere. With minimal details regarding this mystery, questions are circulating, and video of the hole was captured by a helicopter over the Yamal Peninsula (the oil and gas bearing region of Russia). The video revealed debris and signs of combustion surrounding the area of the hole.

Obviously, some people are pondering the idea of UFOs hitting Siberia, while others are contemplating if this is a drilling or a methane explosion. Maybe a sinkhole. But mostly, it's just: What the hell is going on?

Experts are claiming that the cause of this could potentially be related to global warming, and are theorizing that the hole is releasing gases under that surface that are violently exploding out. Plus, the darkening around the inner rim of the crater may indicate a severe burning. But other theories are being proposed, too. For instance, some believe that the hole was formed from a meteorite striking, while others speculate that the crater was formed by a water, salt and gas mixture that ignited underground and resulted in an explosion.

To solve this baffling mystery, scientists are taking action to investigate the scene. Experts from the Centre for the Study of the Arctic and Cryosphere Institute of the Russian Academy of Sciences, accompanied by a specialist from the Emergencies Ministry plan to take samples of soil, air, and water from the area.

A spokesman for the ministry's Yamal branch said that it is too early to say what the cause of this gigantic hole is. Guess for now, it's up to our imagination...