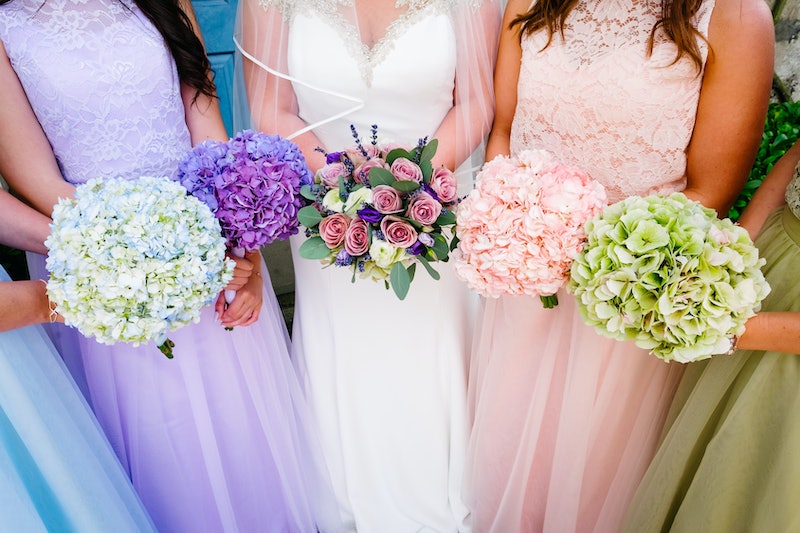 This year is already a very good one when it comes to weird bridal party photo trends. For one thing, we found out that brides and bridesmaids have been pulling up their dresses to show off their butts in photos, something I think we can all agree couples will be proud to show their grandchildren someday. Some of them look very intentional, and others like they just got their skirts caught in their underwear after a trip to the bathroom — the next big thing, I guess, is bridesmaid wedgies or camel toe. I called it here first.

Even if you've never seen anything as raunchy as bridesmaid butt crack (aaah, that sounds awful), if you've been to any wedding, ever, you probably know that the whole bridesmaid dress market is a bit ... awkward. "Traditional" bridesmaid dresses aren't ones that many girls would wear again, and the matchy-matchy look doesn't tend to work because everyone has such different bodies and coloring. So it's cool to see when people defy tradition and go for creative and interesting rather than pretty with their bridal party. Here are some weird bridesmaid dresses I've seen recently, from "really awesome" to "WTF."

This couple shares a mutual love of Disney and just went for it. I'm kind of obsessed and can't look away.

Actually, green is not a primarily color. Thank you, elementary school art class. But these bridesmaids still have a nifty theme going on.

This is where "WTF" territory starts. I've never seen zebra print and yellow together, so ... points for being unique?! As for the dress on the right, I'm not even sure how she's breathing.

This didn't make the Disney bridesmaid dress cut because it's more like Cinderella before the transformation.