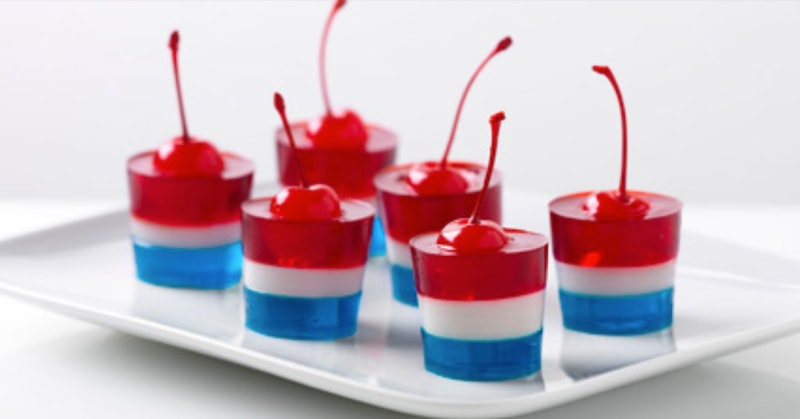 Confession: I hate Jell-O. I have never liked it, not even when I was a kid. In fact, one of my least favorite things about being kept home sick was the fact that our fridge would magically fill with those little pre-made Jell-O cups. As far as I was concerned, those little cups took away the only good thing about Jell-O — making it — leaving me with an unappetizing pool of weirdly-textured goo.

It’s no surprise, then, that I’ve never been a fan of Jell-O shots, either. Not even booze can make something with that weird a mouthfeel appetizing; additionally, most of my hangovers can usually be attributed to that one Jell-O shot someone convinced me in my inebriated state to consume at the end of a night of otherwise moderate drinking.

I pretty much always say no to them now; but why did I continue to fall prey to these awful, gross things for so many years, in spite of the fact that I am quite firm about my dislike of the stuff? I think it has something to do with all those bizarre desserts made of Jell-O we constantly found at birthday parties and other holiday gatherings when we were kids. Jigglers, rainbow gelatin, and all these other recipes must have paved the way for four years of Jell-O-flavored regret once we hit college. Thank goodness we grew out of them, the same way we grew out of these seven recipes… or did we?

I mean, if you’re going to eat something that wiggles when you poke it, it may as well be shaped like something bizarre, too. Jell-O’s sales weren’t doing so well in the mid-‘80s, so General Foods VP of Marketing Dana Gioai introduced the Jigglers recipe to the world — which, combined with the Bill Cosby advertising campaign, turned out to be just what Jell-O needed. Fun fact: If you add some Knox gelatin to the mix, it lends them a little extra firmness, ensuring your Jigglers won’t fall apart when you pick them up.

How do you make a cup of Berry Blue Jell-O — already notable for its tendency to turn your tongue blue — even more exciting? Stick some Swedish fish in it and call it an aquarium, of course. If there was one Jell-O dessert that tempted me in spite of my dislike of the stuff itself, it was this one. Because fish.

We touched briefly on Jell-O 1-2-3 in our examination of gimmick foods we loved when we were kids, but wouldn’t touch with a 10-foot pole as adults; what made it so exciting was the fact that one packet of the stuff magically separated out into three different layers when you mixed it with boiling water. I definitely had a habit of eating the whipped cream and the mousse, but leaving the actual gelatin well alone because ick, Jell-O. It was discontinued in 1996, but if you really want to experience it for yourself, you can always make a slightly fancier version from scratch.

I still can’t understand why you’d want to ruin a perfectly good bowl of fresh fruit by covering it in chemicals and sugar. I find it even more difficult to understand wanting to coat things like cabbage and ham in the stuff, but apparently that happens, too. According to the Huffington Post, savory Jell-O salads were so popular in the ‘60s that the brand introduced a bunch of vegetable flavors that have (thankfully) since been discontinued. But still, those awful molds continue to decorate holiday buffet tables year after year, waiting patiently for their return to power. Shudder.

For the advanced Jell-O maker, the practical application of this technique as a college student involves adding a little booze and pouring them into shot glasses instead of one big Jell-O mold (see above). That’s presuming that your average college student is willing to take the additional time and effort for them, you knew it was going to be a good party if you found them in fridge when you got there.

I remember eating a variation on sea foam salad as a kid that was actually pretty good. We called it “green dessert”; it got its distinctive color from pistachio pudding mix. Traditionally, though, seafoam salad is made with lime Jell-O, which is then mixed with cream cheese and canned pears. Uh… I’ll pass.

Finally! A use for Jell-O I can get behind! It didn’t come to my attention until much later on in life that poking a white sheet cake full of holes and pouring cool Jell-O liquid on top of it resulted in a gorgeously striped cake, but boy, am I glad it did. Did anyone else grow up deprived of this glorious dessert? Because I kind of regret that I did, and I just sort of want to know that I’m not alone.