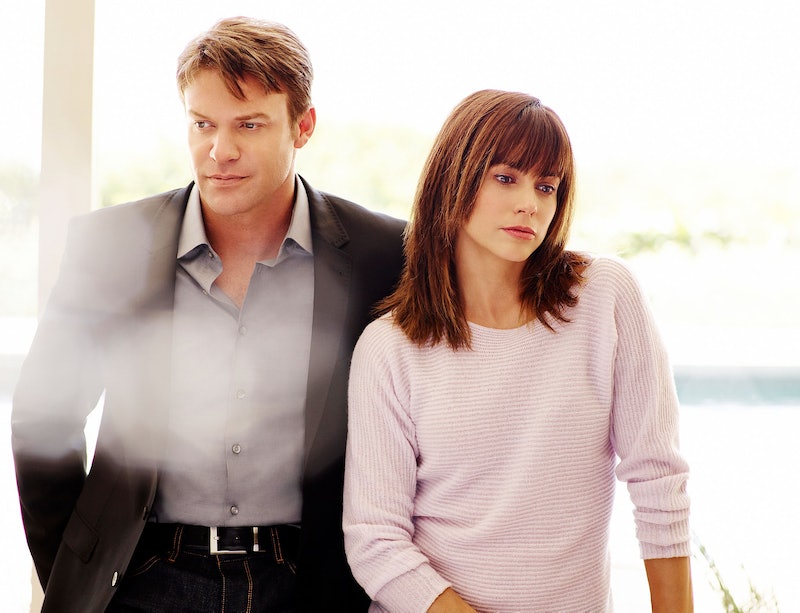 What do you do if you admire the ambition of a show but find the whole thing falls apart in its execution? That, though the intent is there, its translation is not. And how do you write about it in a constructive way that doesn't come across as bashing? That's the struggle with USA's Satisfaction , a show about a marriage at a crossroads, billed as "provocative," and the unconventional ways in which its stars try to save it. Like the characters on the show, I have been left wholly dissatisfied and struggling to find more.

"Gray area is the world we live in," the series' star, Matt Passmore (he plays Neil) explained to me while we were on set last month. "Television-wise, we've evolved from The Brady Bunch. We've realize that's not real."

This is a sentiment I, at least, agree with wholeheartedly. And television's evolution into storytelling that goes beyond its Jell-O-y counterparts is my bread and butter.

But gray for the sake of gray doesn't make a show compelling, it makes it a smattering of parts in lieu of a whole, hoping to get by on clichéd ideals and derivative circumstances.

Satisfaction takes its stab at the idea with a Hung-ian flair, its lead character Neil and his crisis of identity and his love of taking the "pretend to be your wife's male escort and take a client out for a date" route to find his own mojo and understanding. What does he want out of life? What does she? It's not a lack of love between them, it's a lack of honesty — humorous, considering they both want to live a life that's more honest. Neil doesn't want his high-powered job... except he sort of does. He's an executive type with a penchant for taking his family for granted while preaching "what does it all mean?" to anyone in his work life who will listen. He cannot seem to find solace in either — and both are suffering because of it.

This is a very, very common problem in modern relationships. In fact, most all modern relationships are one big gray area, making it great fodder for the TV set. The complexities of modern marriage are high on the priority list of television showrunners this year. And with good reason: we're all struggling to find those answers right now.

Neil looks for sincerity and honesty when it suits him... and goes to an actual Buddhist monk (for real, you guys), as if the act of showing up itself is enough, tossing around a few stories of his escapades and a want of satisfaction for good measure. Unlikeable characters I can deal with — half-hearted, hollow attempts positioned to look like "a man taking action in his life" I cannot.

There is nothing about his wife Grace (Stephanie Szostak) or Neil's circumstances that feels different, and their extreme choices (mostly involving sex) could easily be explained with a bit more of a fleshed-out look at who they are as people rather than tropes. But they don't, so instead the whole thing doesn't feel all that real.

Some might make the argument that these foibles make Neil realer in this regard — but I'm not sure they do. Particularly when couched between suburban car chase scenes and a male escort threatening Neil while an overly goofy and unnecessary side-character riffs on Neil's apparent badassness. In that regard, the same cookie-cutting, one-dimensional methodology that the series lambasts as a thing of the past, took place in the construction of this series' narrative. Just with more jazz-handied "EDGE!" If we're moving into the next era of television storytelling — one rife with complexities, moral ambiguities, and a dismissal of the ideas of pure good vs. pure bad — that gray area needs to be handled with a bit more grace and empathetic understanding.

Just because you consider the story "uncomfortable and very truthful and raw in a lot of places and in a lot of ways," as Passmore does, doesn't mean it translates that way on the screen. Just like so many folks, I wanted to find satisfaction within this world that promised an unflinching look at how modern relationships work and what we do to escape ennui, but I just couldn't.

Satisfaction misses the mark, though not for lack of puzzle pieces. What ultimately undoes its heart is the trope-y way in which the writing tries to convey its story. There are many — a veritable smorgasbord — of situations thrust into its pilot from which to choose, but not a lot is earned. Characters can be flat and one-dimensional, emotionally speaking, if the script shows us there's something more on the horizon. That lessons will be learned, choices labored for. Neil flops about with his tantrums and somehow gets a promotion. Grace wants to go out and party and have fun and gets arrested in lieu of her book club night in. Instead of characters with real, palpable dissatisfaction, we are left with plotlines that ring hollow next to the ambitions of the project.

Enough with the "middle-aged-man is dissatisfied and looks to get his groove back by going at life all wild-style" thing. Cable is full of these men, done much better than Satisfaction has shown thus far. There's still hope, though. USA has plenty of shows that do well and their recent additions — in particular the so-good-it-hurts, just renew it already pelase, Playing House — demonstrate that portrayals of unconventional modern relationships and situations can leave you more than sated.

Satisfaction premieres Thursday, July 17 on USA Network at 10 p.m.: Decide for yourself if it's one you want to watch.