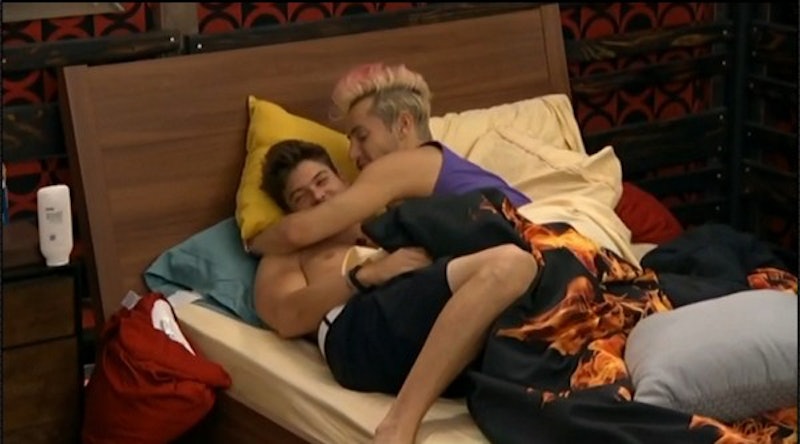 PDA might be a strong acronym considering there's no such thing as private displays of affection in the Big Brother house, but that doesn't change the fact that Frankie Grande and Zach Rance just can't seem to keep their hands off each other. From the moment Zach and Frankie became the showmance that took us all by surprise, the boys who are now affectionately known as "Zankie" have been spending most of their downtime in the competition half-on top of each other. Or fully on top of each other. Or somewhere near each other. Or talking about each other. Or just plain making us all wish we had a relationship as physically affectionate as theirs.

It's true that Frankie put their relationship in jeopardy when Frankie tried to get Zach evicted from the house, but not even that betrayal has slowed down them down at all. Zach and Frankie love each other. Maybe they don't love each other that way, what with Zach still identify as straight even if he acknowledges that Frankie would be the first person he'd experiment with if he did ever question his sexuality, but whatever kind of bond they're building is stupidly adorable. Seriously, it would probably have been easier to count all the times Zach and Frankie weren't all over each other than to count some of the best times that they were.

Still, somehow I managed to drag myself through the hardship of squealing over some of my favorite Zankie PDA moments and narrow it down to 22. Somehow.

The Time They Said "I Love You" In Bed

The Time There Was All That Couch Space They Didn't Use

Those Times They Celebrate By Hugging

That Time Frankie Used Zach as a Pillow

That Time Zach Wanted to Be Frankie's Bae

That Time Zach Picked Frankie Up

That Time They Were Spooning

That Time Frankie Kissed Zach on the Cheek

That Time They Struck This Pose

That Time They Kept Each Other's Faces Clean

That Time They Touched Each Other's Thighs

That Time They Held Hands

That Time Cody Couldn't Handle It

That Time This Is Their Idea of a Bro Hug