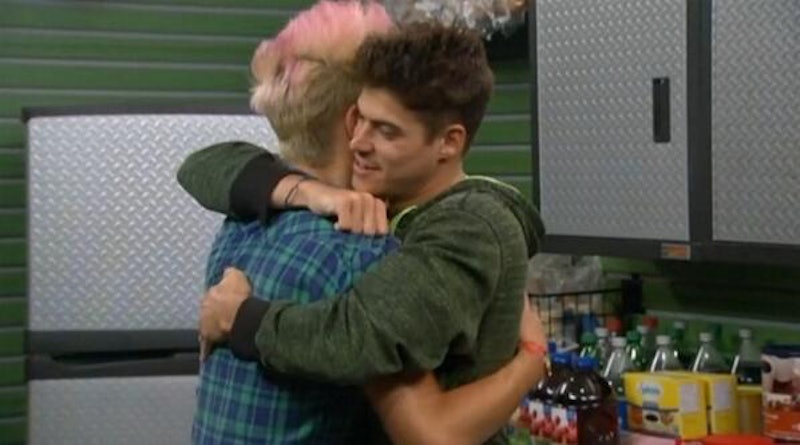 It's a tragic day in the Zankie fandom. "Zankie", or "Zrankie" as Zach dubbed it in Sunday's episode of Big Brother, is the official showmance name for Frankie Grande and Zach Rance. Despite Zach starting out as this season's villain and Frankie bonding with Victoria Rafaeli right away, Frankie and Zach have become an inseparable pair so close that Cody Calafiore gets super uncomfortable when they're cuddling in the same room. And there has been a lot of cuddling, you guys. However, it seems that their romance or friendship or whatever-it-is-they're-doing is about to come to an abrupt end as soon as Zach finds out what Frankie has been doing behind his back. For some reason, Frankie has been conspiring to get Zach thrown out of the house and his actions are leaving the Zankie fans scrambling for answers.

Devin has been at war with various house guests over the Fourth of July weekend and his conflict with Zach has been the most recent and the most divisive. Devin is determined to take Zach down and Zach is determined not to go down without a fight. Frankie has remained a neutral party in the house as much as he possibly can, but he reassured Zach that he was on his side in all this. We should have known from his betrayal of Victoria that he'd just say anything to make someone trust him.

After encouraging Zach to put Devin on blast during the veto ceremony — even going so far as to say that if Zach really wants to goad Devin into reacting then he should call him a bad father — Frankie immediately showed his true loyalty is only to himself when Devin approached him to say he wanted to throw Zach out of the Bomb Squad alliance. According to Frankie, Zach was someone that "Devin could put up and everyone would understand". The two then began counting votes to see if they had enough to get Zach evicted.

Frankie returned to encouraging Zach to blow up on Devin, even though Zach was genuinely coming to him for help. He even told Devin that Zach had been up all night coming up with destruction plans to bring everyone in the house down with him. This is a complete 180 from the Frankie Grande from Sunday's episode of Big Brother who said, "I don't know what I have in [Zach], but it's lovely for now."

The irony is not lost on Zankie fans who are alternating between one of two extremes. It's either they firmly believe that Frankie's backstabbing is the result of some kind of secret plot that he and Zach have been cooking up — even though it's hard to really figure out the details of such a plot — or they firmly believe that Frankie is an irredeemable ship-sinking monster who needs to leave Zach alone. Many of them are just lamenting the fact that Zankie came to an end the same day that it finally made it onto CBS.

The most likely explanation for all this is that Frankie Grande is truly on no one's side but his own and he will go with whatever directly benefits him. While that's exactly the kind of attitude to have in a game where alliances fall apart so easy and no one knows who they can trust, it's sure to backfire on him eventually. Like, say, when Zach finds out how much of a hand Frankie is having in getting him evicted from the house.

Who could have guessed that the end of Zankie would come at the hands of Frankie Grande and not Zach Rance? Certainly not me and, apparently, not the fans. Whether or not Zankie will survive such an epic betrayal still remains to be seen, but the chances seem pretty unlikely. Maybe Frankie should cozy up to Cody Calafiore instead — although everyone that Frankie cozies up to ends up on the block eventually...