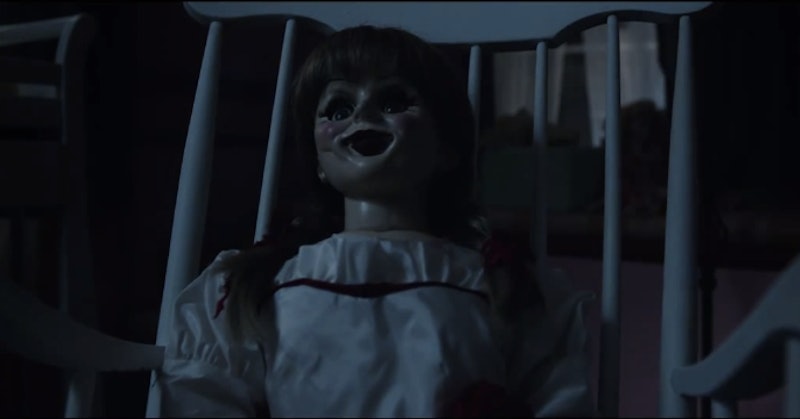 I'm kind of stumped. See, I just watched the brand new trailer for Annabelle, the movie spinoff starring the horrifying doll from The Conjuring , and I genuinely can't tell if it looks great or terrible. Or maybe it looks so bad it's good?

The movie, which, like The Conjuring, is based on real-life reports of a murderous doll named Annabelle, is the story of a couple who buys the world's most murder-y looking doll and is then surprised when it starts possessing people to go on killing sprees.

Here's an idea, people in horror movies: how about you DON'T BUY THE FREAKING CREEPY DOLL?!

Now that that obvious piece of advice is out of the way, let's talk about this trailer.

See, on the one hand, it seems like the most obvious, well-worn horror story in all of film and at this point, in a post-all-the-Chuckie-movies world, it seems like such a pointless cliche to try and tackle. Plus, if you take a look at the trailer, you'll notice that the acting... how do I put this nicely... kind of sucks? Though I really think that's less the fault of the actors and more the fault of the atrocious expository dialogue.

That said, if it's self-aware enough, there's a lot of dumb fun that could be had with a premise like this. If Annabelle has no ambitions beyond being a creepy and diverting summer cheese-fest, then frankly, I have a lot of hope for it. Any trailer that ends with an expressionless doll rocking herself in a rocking chair has to at least have some sense of humor about itself.

My point is, I'm very conflicted on how I feel about this. This movie sounds terrible on paper but I didn't hate the trailer, even if I recognized just how bad it almost definitley is.

Watch the trailer and decide for yourself if it's good, bad, or so bad it's good: