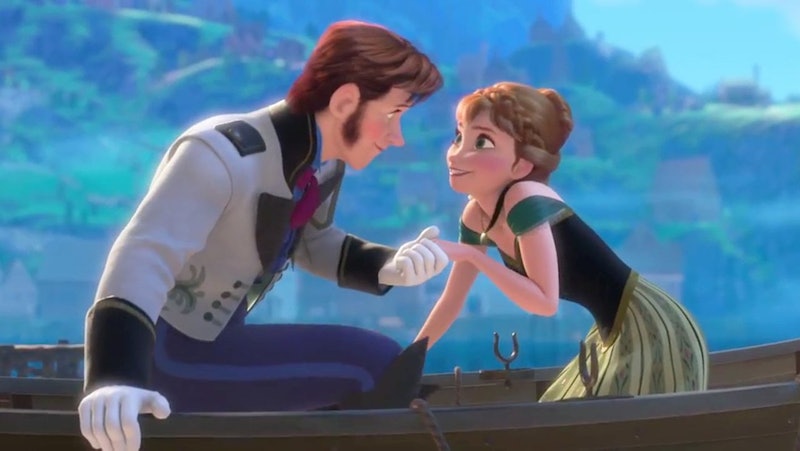 Winter is coming... to Once Upon a Time, that is. The Season 3 finale of Once Upon a Time hinted that fans would see a familiar Frozen face in Storybrooke, and it turns out that the show is adding more than just one Frozen character to Season 4 of the fantasy drama. Elsa, Anna, and Kristoff will all make an appearance, which is already melting my Frozen-obsessed heart. While fans were bummed to hear that Olaf won't appear on Once Upon a Time , there is a character that will be making an appearance on OUAT — and he's not exactly as sweet as Olaf the snowman. According to E!, Frozen 's Hans is joining Once Upon a Time for the storyline that will take place after the events of the original film. Does that mean trouble for Elsa and Anna? Absolutely.

In the animated film, Princess Anna "fell in love" with Hans, a Prince from the Southern Isles. Though the two shared a really awesome duet ("Love Is An Open Door") Hans wasn't exactly the "Prince Charming" we've come to expect from Disney films. Despite claiming to love Anna, it was revealed that Hans was just using the princess to gain access to her kingdom. (Don't marry the first guy you meet, kids.) Hans is so evil that he even tried to kill Elsa to seem like a hero in the eyes of the people of Arendelle.

It makes perfect sense for Once Upon a Time to bring a Frozen villain into their storyline, but I doubt that they will keep Hans as the cut-and-dry villain he was in the film. Once Upon a Time likes complicated villains — they've given the Evil Queen such a strong backstory that she's been able to gain hero-status in the eyes of fans. That means that, if moved to the OUAT universe, Hans might become a more sympathetic character.

We know that the OUAT storyline will take place after the events of the film, which means that a lot of things can change. When we last left Hans, he was a traitor to the kingdom of Arendelle and not the most popular guy around. While the writers on Once Upon a Time are dedicated to the original Frozen story, there's no reason why they couldn't tweak the motivations of the Frozen characters to suit their own needs, just as they did with fairytales like Snow White and The Little Mermaid. Perhaps in this version of the Frozen world, Hans is a political opponent of Elsa who believes that he is the right person to take over the throne. Given Elsa's reign as the Snow Queen, Hans might legitimately worry for the people of Arendelle — what happens if Elsa loses control of her powers again? Perhaps Hans doesn't want the kingdom for purely selfish intentions, but because he truly believes that he can protect them better than Elsa can.

We know that Elsa will continue to be "misunderstood," which would give the writers perfect material to incorporate a different version of Hans into the story. Perhaps Hans truly believes that his way of ruling Arendelle will be better for the people, and goes head-to-head with Elsa over it, not understanding there is a method to Elsa's icy "madness."

I'm excited to see how Once Upon a Time re-imagines the world of Frozen. With a story still so fresh in our minds, it's nice to see that they won't do the exact same thing that the animated film did. Could that mean turning Hans into a less-than-villainous villain? It would be the perfect OUAT twist.

More like this
Neil Patrick Harris Will Play 'Doctor Who's “Greatest Enemy” Yet
By El Hunt
Here's How To Stream 'Downton Abbey: A New Era' & The New 'Downton' Channel
By Alice Broster and Sam Ramsden
David Tennant Will Have A New Villain To Battle In His 'Doctor Who' Return
By Frances Stewart
'Stranger Things' Fans Are Begging For Steve To Live For The Funniest Reasons
By Grace Wehniainen
Get Even More From Bustle — Sign Up For The Newsletter