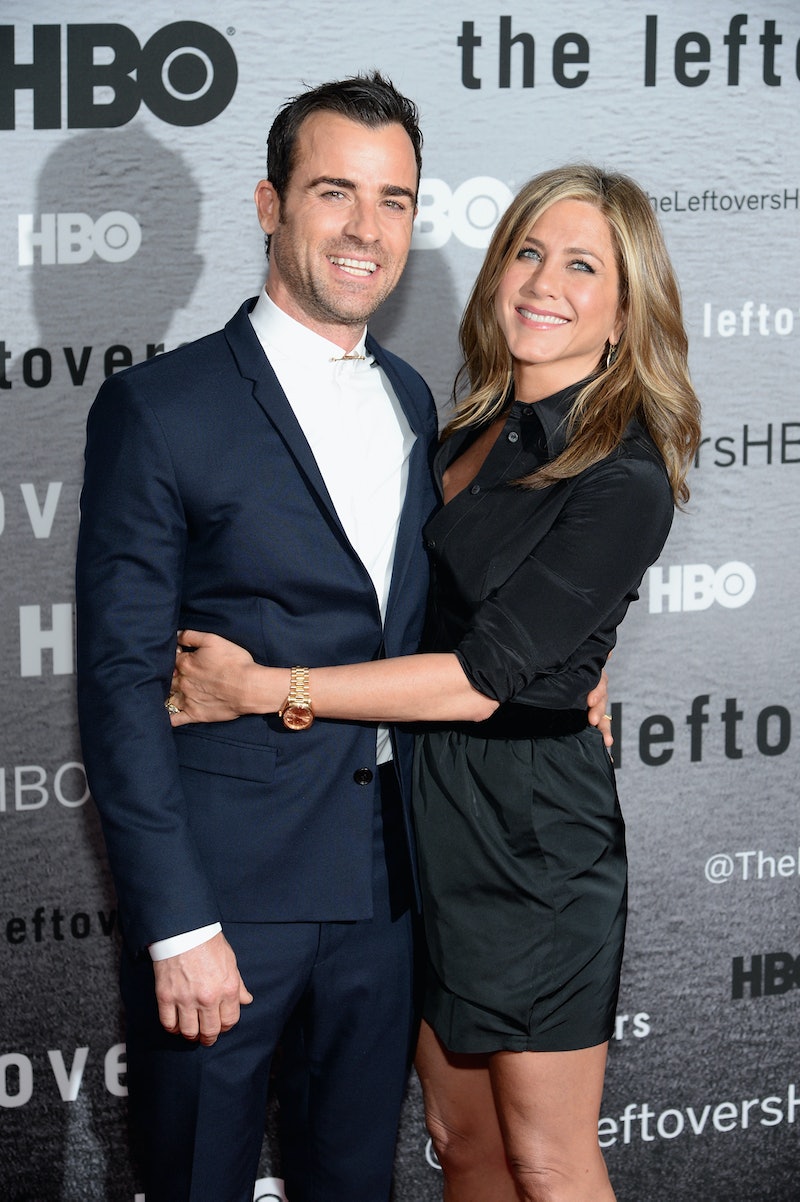 Alright, you guys, we get it. Ever since Justin Theroux started promoting his new HBO series The Leftovers, he hasn't been able to stop gushing about his fiancé Jennifer Aniston, and vice versa. It's been really cute, albeit surprising, to hear that Aniston called Theroux "so beautiful," at the Details magazine party, considering they haven't talked about their relationship, like, ever, until now. Justin Theroux and Jennifer Aniston are together and in love and they don't care who knows it — even if it seems like they're trying to out-do each other with sappy romance quotes.

I mean, obviously I already knew that Aniston and Theroux are constantly shocked by how attractive the other is. They're probably two of the best-looking, engaged human beings currently breathing air on this planet. Cool, I'm down with that. So when Aniston opened up to Women's Wear Daily at the Details party about how her inhumanely attractive fiancé's eyes "knock her out" every day and how she thinks he's "so beautiful and handsome," I wasn't surprised.

In the past month, Aniston and Theroux have talked their way into making me want to date them both. Seriously, all of this gushing sounds like they're trying to convince me that I should date them and it's working, even if they're being so sappy that I'm going to have to get a cavity removed if I hear another word. Which leads me to believe that one night, while they were admiring each other's beauty, they decided to play a game to see who could out-sap the other in public.

So, if you really are playing, Jen and Justin, I'm paying attention. Here's a ranking from 1 to dripping-with-sap of Theriston's (are we calling them that?) latest relationship comments:

Theroux on Their Engagement

We have hot feet, but we're not going to let you guys know. We're still happily engaged.

He's so graceful and utterly kind and golden.

Aniston on Theroux Being a "Lost Gem"

He's just always been there and been brilliant, and now this is just in a different light.

Theroux on What He Would Need in a Real Life Rapture

Theroux on Their Relationship vs. Paparazzi in Details

You have to center on what its core thing is, which is that you met someone you fell in love with.

Sap Meter: 8.5 (They fell in love, people, AND NOTHING ELSE MATTERS. Not even you knocking over a child for a photo.)

It is amazing. He's just so beautiful and handsome to me, and I love that his eyeballs are so beautifully captured because those eyes just knock me out every day. He just gets better every year.

Sap Meter: OFF THE CHARTS, literally dripping with maple syrup. (I don't even know.)