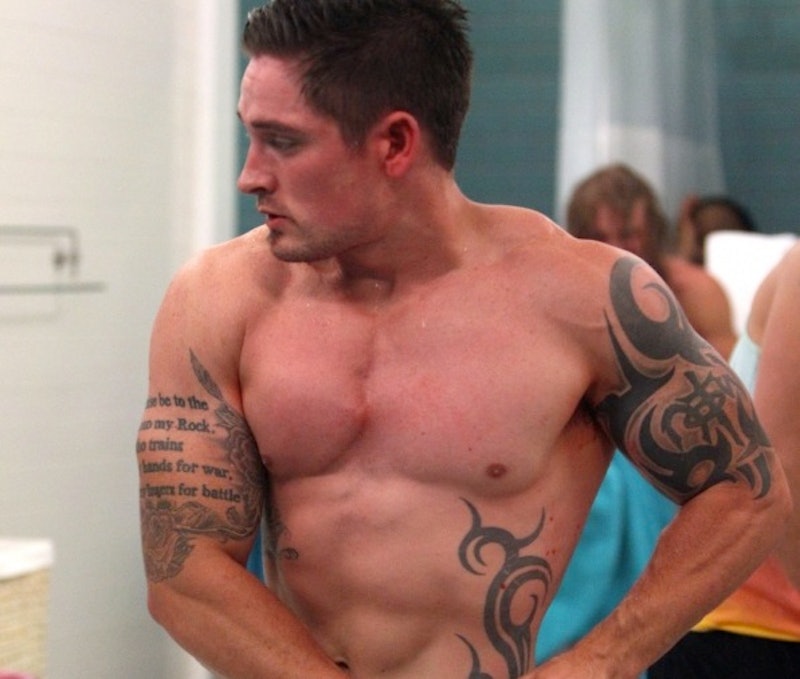 In case you missed it, Caleb Reynolds is in love with Amber Borzotra on Big Brother, except his version of love actually feels more like a creepy obsession. At this point, Caleb's feelings for Amber are so inextricably tied in with her game that it's hard to tell if Amber can distance herself from Caleb without jeopardizing her place in the house. It's already impossible for anyone to talk about Amber without immediately mentioning Caleb in the next breath, because whether Caleb is actively trying to save her against her will or actively working against her when his backward "chivalry" doesn't make her fall for him, the fact still remains that he's playing his entire game based around how he feels about Amber on a day-by-day basis.

How did Amber get stuck in this chauvinistic mess? Unsurprisingly, it's Caleb's fault. From the moment he decided that he had a crush on her, he has not let up on his obsession since. Tracing the path from when Caleb first noticed Amber to how Amber became one of the biggest targets in the house because of it is a depressing and misogynistic tale, but it's pretty important in order to understand why Caleb and Amber will never be a showmance.

June 26 — Caleb first admits to Paola that he has a thing for Amber. Paola encourages him to let Amber know how he feels.

June 27 — Caleb brings up his feelings for Amber while playing pool with Cody and Derrick. Although they encourage him to tell Amber how he feels, they also note that he doesn't seem to be able to think of anyone or anything else but her.

June 28 — Zach and Frankie discuss the ways Caleb and Amber's showmance might be good for them, but Frankie admits that Caleb is volatile and may go off the rails when Amber doesn't react the way he wants her to. Already someone has noticed that Caleb's feelings for Amber are more selfish than they are selfless.

June 29 — Caleb takes Amber to the HoH room and tells her that everyone thinks they're in love. Amber tells him she just wants to be friends. After she leaves, Caleb starts telling everyone that she's too shy to say that she's into him, because of course Caleb knows how Amber feels better than Amber does.

June 30 — Devin tells Caleb that Amber called him self-centered and said that guys like Devin are more her type. Caleb turns on Amber and begins to trash talk her to the other house guests in a series of sexist rants that make them realize that Caleb's ego is big enough that he would try to get Amber evicted over this.

July 1 — Caleb campaigns to get Amber evicted because she injured his pride and "used him", conveniently forgetting that Amber was upfront about not liking him. He accuses her of only wanting someone to carry her to the end of the game and generally acts like a jilted lover in a one-sided relationship.

July 2 — Amber talks to Derrick about how people seem to be turning against her and how Caleb is moping around since they spoke. Devin calls Amber out on how she's been treating Caleb, but Amber says Caleb is the one who has been treating her wrong. Still, Amber goes to Caleb to apologize for whatever he had heard, because Caleb has the whole house convinced that his hurt feelings are her fault.

July 4 — Amber tells Caleb that Devin is talking down to her and the other Bomb Squad members, playing their game for them and not giving them a voice. When Caleb warns Devin about this, Devin accuses Caleb of only thinking how Amber wants him to think.

July 5 — Amber and Caleb's feelings for Amber are identified by the rest of the Bomb Squad members as the reason for the current tension within the group. Thus, although Amber is the victim, she's being blamed for Caleb's volatile emotions.

July 9 — Zach tells Amber that she's being grouped in with Caleb and Devin and Amber tries to tell the other house guests that she isn't working with either of them. Caleb goes around the house to back her up, not because it's true but because he believes that helping her out will change her mind about wanting to be with him.

July 10 — Nicole nominates Amber for eviction and Derrick convinces Caleb to volunteer to be nominated so he can throw the competition and save her. When Caleb tells Amber about the plan, she tells him not to do him, knowing it won't end well. Caleb does it anyway.

July 14 — The other house guests discuss the fact that Caleb would do anything in the world for Amber and is playing his entire game for her. Caleb gets angry that Amber still refuses to return his affections even though he put himself on the block for her, because if a guy does something nice for a girl then she has to love him. In Caleb's world, it's a fact.

July 15 — Devin uses the fact that Caleb is in love with Amber as the basis for his campaign to stay in the house, pointing out that it's dangerous to leave the two of them in the game together. Amber gets frustrated Caleb's refusal to take a hint and starts planning ways to distance herself from him.

July 16 — Caleb becomes jealous of Amber and Cody's relationship because he firmly believes that Amber belongs to him at this point. He starts to talk about getting his head back in the game and refusing to care about Amber or help her ever again because she doesn't "appreciate" what he's done for her.

July 18 — Everyone agrees that now that Devin is gone, Caleb and Amber are the biggest dangers in the house because they're a matched set, despite Amber wanting no part of it. Thanks a lot, Caleb. Misogyny is winning again.