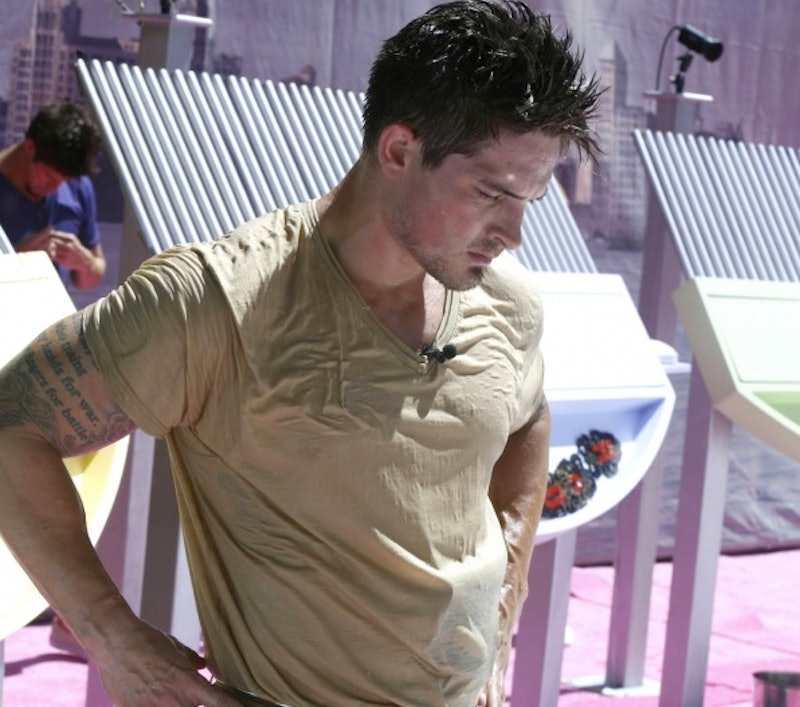 Caleb Reynolds is turning out to be a real Nice Guy. No, that's not a compliment. There is a difference between a nice guy and a Nice Guy, a sense of creepy, hypocritical entitlement in the latter usually not present in the former, and Caleb is showing everyone the difference on Big Brother Season 16. Ever since he entered the house, Big Brother's Caleb has been obsessed with Amber Borzotra. It was cute at first, but Caleb has since taken it to such creepy and misogynistic levels that those of us not praying for Devin to finally get evicted from the household are busy praying that Amber never gives into Caleb's gross ideas of courtship. Currently, Caleb seems to think that if he does nice enough things for Amber, then she'll change her mind about wanting to be with him. That's why, for example, Caleb threw the Battle of the Block on Sunday so that Amber would be safe for the week.

It's an action that might have been sweet if there was even a hint of reciprocity in their relationship. Caleb was upfront about having feelings for Amber and Amber was equally upfront about not having them in return. That should have been the end of it, especially considering they haven't even known each other for a month yet, but Caleb seems to be convinced that he can change Amber's mind if he just says or does the right thing. Even worse, Caleb gets angry whenever he thinks that Amber is showing even the slightest amount of interest in anyone else.

At one point, Amber was receiving a massage from Cody in the backyard and having a conversation with him and Caleb yanked Cody aside later to demand to know if there was anything going on between Amber and him. Earlier, Devin was easily able to convince Caleb that Amber had called him self-centered and said she was more into guys like Devin, which sent Caleb on such a rampage against Amber that the whole house knew exactly how little he thought of her before the day was out. In the last instance, Amber ended up apologizing to him for making him believe she was capable of saying things like that about him, and that still doesn't sit right with me.

Listen, there's nothing wrong with persistence. Most Hollywood love stories are built on a guy who believes that he and a girl belong together, and he does everything he can to prove to her that he's the one for her. Hell, it's how Captain Hook and Emma Swan got together on Once Upon a Time . However, there's a fine line between persistence and stalking that Caleb crosses all too often when it comes to Amber. If he really liked her, genuinely cared about her, then he would want her to be happy even if it wasn't with him. Instead, Caleb spends all of his time telling Amber that he's "seen the way [she] looks at" him, that her family watching at home would probably encourage her to marry him for sacrificing himself for her, and basically implying with his every word and action that Amber gets no say in her own life.

It's obvious that Caleb considers a relationship between himself and Amber inevitable and, quite frankly, at this point there is absolutely no way for Amber to shut this down without jeopardizing her own game. Letting him down gently resulted in him launching a vendetta against her that could have gotten her kicked out of the house if he hadn't been talked down. Letting him down more firmly, especially now that he thinks he's made some sort of huge romantic leap by saving her, would just put a target on her back at a time when Caleb will be the strongest competitor left in the house once Devin is evicted.

Caleb and Amber are basically the poster child for what happens when Hollywood persistence is applied to a real life not-couples and the fact that Caleb has essentially removed Amber's ability to say a definitive no to him makes any possibility of them as a showmance a bad idea. He's backed her into a lose/lose situation of being forced to keep him close but not close enough to lead him on and everyone else in the house is so busy commenting on how in love Caleb is with Amber that no one is paying attention to what Amber thinks and wants.

In fact, according to BB Updates, Amber and Caleb's names are so intertwined at this point that Amber said, "I'm nervous some people would send Caleb home and then try sending me home next." Honestly, Caleb's entitled attitude could mean dangerous things for Amber's game in the future, so I wouldn't be sad to see him go home sometime soon. Maybe after he's gone, Amber can finally breathe and feel like an independent player again.