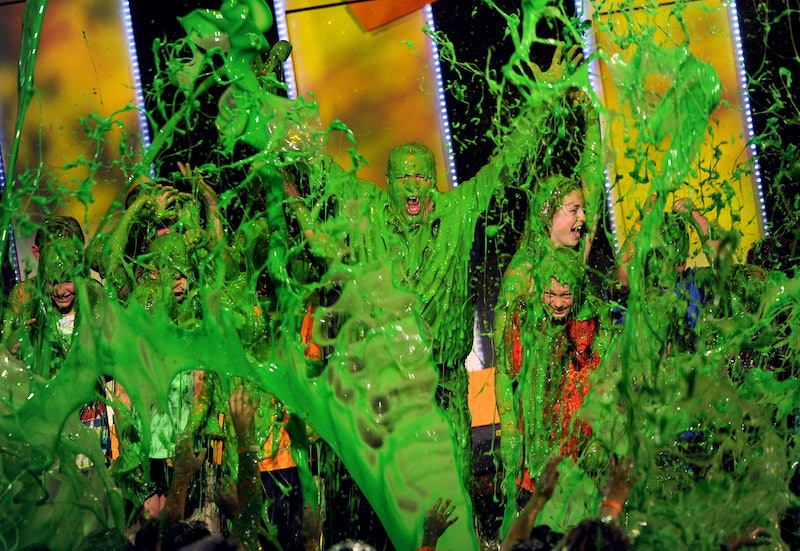 Anyone who watched Nickelodeon as a kid probably remembers the neon-green, gooey, slimy mess that made an appearance on a variety of Nickelodeon shows. It was a gross-looking, opaque sludge that was dumped gratuitously on Nickelodeon's game shows, award shows, or just because. It was horrifying, but also intriguing, and you wondered what it tasted like and you secretly kind of always wished you could find out. What if it got in your nose? Was it sticky? Where did the slime come from? Questions that still plague you to this day. (SPOILER ALERT: It's vanilla pudding and it sounds DELICIOUS). More recently, though, Nickelodeon has been classing things up with the unveiling of a brand-new, GOLDEN SLIME.

Vulture reports that the network debuted their fancy new slime at the 2014 Nickelodeon Kids' Choice Sports Awards when it rained down on David Beckham and his two children. Like, Lindsey Weber at Vulture, I also wasn't aware that this particular awards show was a thing (how many awards shows do these people need? Kids these days.) but it seems Nickelodeon is taking the classic slime in a whole new, shinier direction.

Kids compete to enter a giant, strobe-lit "video zone." Once they gain entry, they face another challenge set up by a "game wizard," and make you want to be inside a real-life video game.

"Connect the dots". On steroids.

The Farvergnugens rule, everybody else drools.

What's with the side-eye coming from the disembodies head cutout?

What Would You Do

If you don't think the theme song of this show isn't stored deep in your unconscious, you're lying to yourself. WHAT-WH-WHAT-WHAT-WHAT.

Legends of the Hidden Temple

By far THE BEST Nickelodeon game show of all time that you always wanted to be on but couldn't because you either got too old or it was cancelled, whichever came first. A weird and somewhat problematic mashup of Olmec-inspired themes and an Indiana Jones "explorer" vibe, kids have to find their way through a "temple" obstacle course, finding that they are occasionally assaulted by adults dressed in some kind of generic-looking tribal gear and face paint. Terrifying.