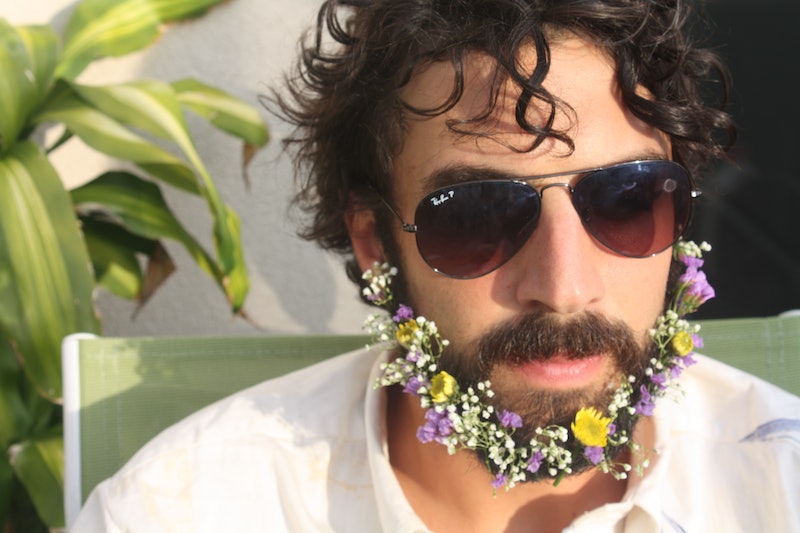 By now, you've most likely spotted the Flower Beard on at least one of your news feeds. Bust magazine was one of the first to report on the trend, which is exactly what it sounds like: Woodsy, hipster guys putting flowers in their facial hair, specifically their magnificent beards. I was immediately smitten.

It's not surprising that this became a thing, really. With gender norms slowly (very slowly) fading into oblivion, it was only a matter of time before dudes embraced their secret envy of how awesome all us chicks looked in our flower crowns. Plus, it makes them look more sensitive, which everyone knows is a major panty dropper. Amirite, ladies?!?!

All the sites reporting on the zany trend stated that these beard gardens were only being used for artistic purposes, applied for portraits in hopes of getting tons of reblogs on Tumblr but never actually brought to the streets. "What a wasted opportunity," the women of Bustle thought, as we sat in our Brooklyn offices, peering out the window at a guy playing flute whilst wearing a cat on his head. It was time to see how viable this fad was IRL, and we had just the beard to take it on.

"Hey! Want to put flowers in your beard and let me write about it?" I texted him, with this photo as an example. "I would love flowers in my beard," he responded almost immediately. Knew he'd be down.

I was sort of dreading actually executing the flower beard. Would I have to tie the stems into Donald's facial hair? Did I need to get bobby pins involved? Nope. Here's the two step tutorial, if you feel like giving it a go:

No twisty ties or crazy stem knots needed. I would call Donald's beard Average Hipster Beard Length And Density, so tiny flowers definitely worked the best for him. We experimented with larger daffodils, but the top heavy blossoms tumbled into his lap almost immediately.

"I gotta be honest, Donald," our homepage editor, Rosanne, said mid-flower arranging, "this is not turning me on."

What did Donald think about his new look? Although he claims he couldn't really feel the flowers, he did say, "It feels pretty gross. Like all this stuff is stuck in my beard, which is my biggest daily source of paranoia. I have a strong desire to..." he mimed a downward raking motion with his hands. But he persevered, for journalism.

A few photos of our finished product:

Stunning. Now, to the streets!

We decided to head to a nearby bar in Williamsburg, Brooklyn known for their outdoor fire pit, taco truck, and being consistently full of beautiful people. The typical guy that frequents this place is the bizarrely fascinating 50/50 combo of hipster guy and bro dude that feels like it should clash so hard that the human trying to embody it explodes into ash, but somehow it works. Donald and his beard would not go unnoticed.

On our walk over, the main reaction was giving a dirty look. "I'm getting a lot more eye contact than I usually do," Donald observed. "A really attractive woman just caught my eye and made a disgusted face." My personal favorite was an older gentleman who spotted the beard garden, then whispered to his friend, "Flower child." :')

Sadly, Donald's garden diminished significantly on our journey. The bigger yellow flowers fell out before we even left the apartment. But this didn't stop everyone in the bar from staring when he walked in. People not-subtly-at-all took photos. One girl audibly whispered, "Holy shit! Look at that guy's beard!" before very obviously uploading his picture to Instagram. Another table (two dudes, one girl) stared at Donald for the entirety of our visit. I imagine this is what it's like to be a D list celebrity who no one can quite place but thinks they should take a photo of to show their friends later, just in case.

One person who was definitively not impressed? The guy working the taco stand at this bar. He almost rolled his eyes as Donald ordered, then made his veggie quesadilla in silence. This is a weird hookup bar in Williamsburg, though. I'm sure this guac slinger has seen a lot of messed up shit in his day. I salute you, soldier.

By the way, drinking was not an issue with the flower beard. Eating, however, posed more of a problem. Not so much that Donald ended up with a mouthful of baby's breath, but the jaw movement really compromised the tiny blossoms that were holding on to his beard for dear life at this point.

The Final Look After Much Eating, Drinking, Talking, And Bike Riding

Donald's beard is looking a little drunk. At this point, it looks more like he went foraging through the forest and got tangled up in the local flora rather than an intentional style choice.

Final verdict? I, and Donald, wouldn't recommend this look for every day. But if you have a special occasion (your wedding, making a big presentation at work, etc), the flower beard is a great way to go that extra mile with your look. Plus, as one pretty girl in the taco line said, "I think that's sexy as hell."

More like this
Glossier’s New Olivia Rodrigo Campaign Is Giving ‘90s Groovy Chick
By Tomi Otekunrin
Kiehl’s Just Launched Eco-Friendly Cleansing Bars
By Jessica Morgan
How To Style Your Hair For A Festival, According To Maya Jama’s Hairstylist
By Tomi Otekunrin
Charlotte Tilbury Just Added A Glow Tonic To Her Skincare Collection
By Tomi Otekunrin
Get Even More From Bustle — Sign Up For The Newsletter