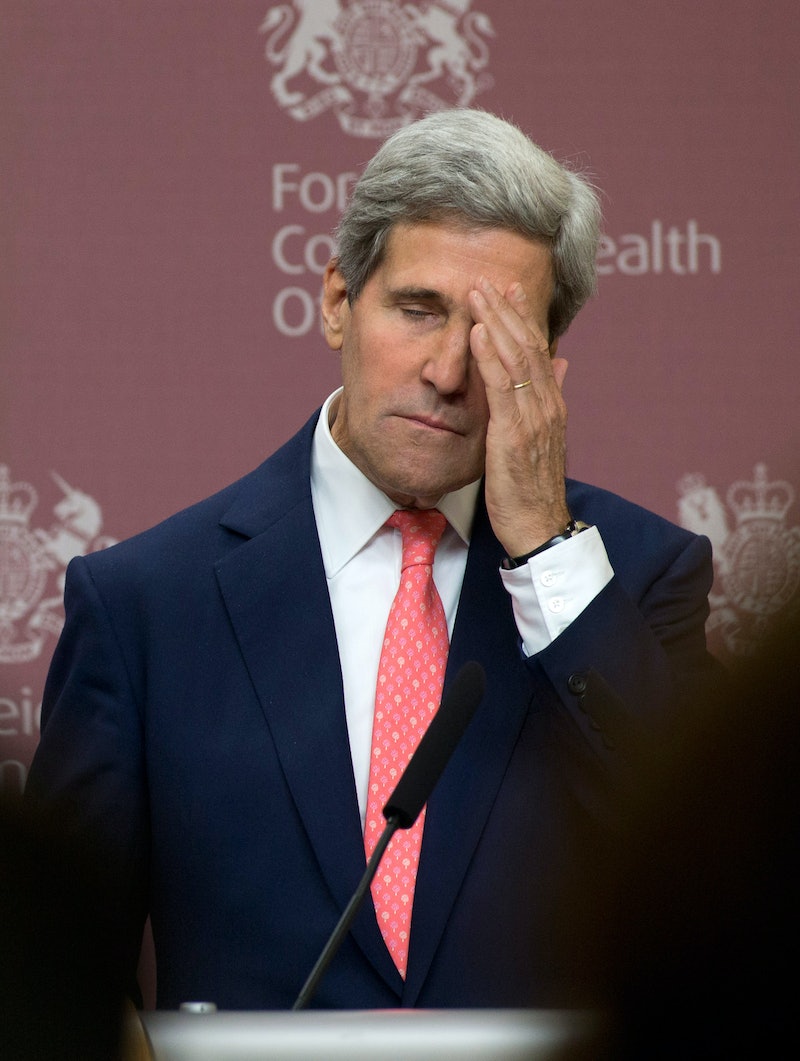 It's always weirdly fascinating when important people accidentally get caught saying what they really think. It can also be really controversial. U.S. Secretary of State John Kerry, caught on mic sarcastically calling Israel's Gaza offensive a "hell of a pinpoint operation," was reminded of that on Sunday. Kerry was doing a number of interviews on the crisis in Gaza on Sunday morning talk shows when part of a phone call he made to an aide about the situation in Gaza was caught on tape. Here's the important part:

He was almost certainly referring to Israel's initial contention that its ground invasion into Gaza was meant to seal off tunnels some Palestinians may be using to gain access into Israel. That sounded like a fairly limited military operation. But instead Sunday marked the most deadly day in the Gaza offensive so far, with The New York Times reporting at least 87 Palestinians and 13 Israel soldiers dead.

That's likely what Kerry's aide, named John, was referencing when he told Kerry the situation was escalating quickly, to which Kerry urgently replied:

We've got to get over there. Thank you, John. I think, John, we ought to go tonight. I think it's crazy to be sitting around.

Fox News played the clip and then host Chris Wallace asked Kerry whether he believed Israel's operation is "going too far." To his credit, Kerry didn't completely ignore or dismiss the question, or question why Fox decided to play the tape. But he did give a completely different answer than you might expect when compared with his tone on the phone call with his aide.

I think it's very very difficult in these situations, obviously very difficult, Chris. [When] you have people who come out of tunnels, you have a right to go in and take out those tunnels. We completely support that and we support Israel's right to defend itself against rockets that are continuing to come in.

Hamas has started this process of rocketing after Israel was trying to find the people who killed ... one American kid, three young Israeli citizens. It's disgraceful and so yeah, it's tough. It's tough to have this kind of operation and I reacted, obviously, in a way that anybody does with respect to young children and civilians. But war is tough. ... We defend Israel's right to do what it's doing with regard to those tunnels.

Kerry's response to Matthews was clearly a message of staunch support for Israel's offensive; it appears Kerry's discussions with his aides about what's going on in Gaza are a little more nuanced. That's not a surprise, but it's interesting to get a window into those conversations, if a brief one.

State Department spokeswoman Jen Psaki suggested to the Post that Fox shouldn't have aired Kerry's conversation, but contended that it didn't matter anyway.

Given the range of important global events we are not going to spend time litigating whether taping and playing Secretary Kerry's private conversation was consistent with acceptable protocol. Regardless, his private comments were consistent with his publicly stated view on all five shows: Israel has the right to defend itself including against recent tunnel attacks, but he has encouraged them to not only take steps to prevent civilian casualties, but to take steps to de-escalate and we're working together to achieve a ceasefire.