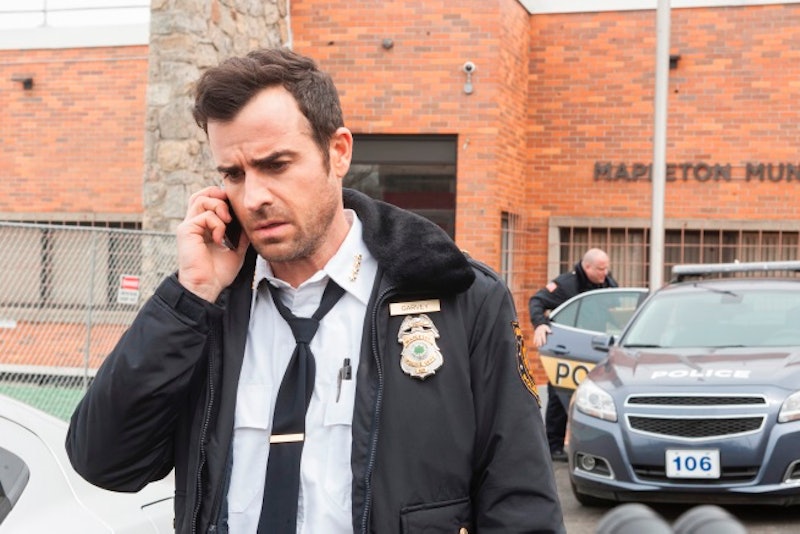 After deviating last week with an anxiety-attack-inducing (at least for this intrepid TV recapper) episode focusing on literally anyone but the Garvey family, The Leftovers returned to form, and the Garveys, with "BJ and the AC." So just what has Mapleton's main fam been up to? The answer is just varying degrees of confusing and boring, like most of the show.

The family patriarch, Police Chief Kevin Garvey, is still very much a lost soul in the post-Departure world. It's Christmastime in Mapleton and that means another town party to protect from the Guilty Remnant and another chance for Kevin to butt heads with the mayor. It's also another chance to illustrate just how disconnected the Garvey family is. He's still trying to call Tommy pretty much every day, but Tommy has disconnected his number and hasn't given the new number to anyone in his family. Kevin literally can't reach Tommy. He literally can't talk to Laurie, who refuses to respond verbally, even though she can hear Kevin. And he figuratively can't communicate with Jill, who seems intent on landing a spot in the Guinness Book of World Records for Most Sullen Teen of All Time.

So how does Mr. Jennifer Aniston do with all his grown up angst? He funnels it into ultimately trivial pursuits, like finding the stolen doll used for baby Jesus instead of just buying a replacement at the local Toys R Us.

Disfunction Rating: 5. Kevin is just doing what he has to do to get by in an objectively awful situation. He wants to have a normal life and a loving family, but no one else seems on board, making it something of an uphill battle.

Laurie is still going strong as a member of the Guilty Remnant. She's become BFFs with Liv Tyler's Megan and brings her along to the Garvey home for a little Christmas visit. Even though Laurie looks like she's cleaned herself up in honor of the occasion (we're talking shampoo and conditioner, folks), she doesn't come bearing good tidings.

It becomes apparent, as Megan reads a very long and heartfelt letter to Kevin on Laurie's behalf, that she's here to say goodbye in a big way. He doesn't take the news well, demanding that she say it to him herself if she wants a divorce. Jill walks in just in time to hear her dad screaming at her mom and gives her mom the Christmas gift she's wrapped and put under the tree for her. Then she walks away without saying anything else, which earns her at least four Sullen Teenager Points.

On the walk home, Laurie opens the gift. It's a lighter inscribed with a message: "Don't Forget Me." Megan tells Laurie she should keep the lighter and promises not to tell (darn cults and their rules about worldly possessions), but instead of keeping the lovely, thoughtful and oh-so-angsty gift, Laurie drops it in a gutter. Later in the episode, after the GR break into several houses just to steal people's family pictures from their frames, she returns to try to retrieve the lighter, but she can't reach it.

Disfunction Rating: 7. She's in a cult, after all. But is she maybe regretting it? Does she miss her family? Does she only miss Jill? Will Jill join the cult? How many Sullen Teenager Points would that be worth? SO. MANY. QUESTIONS.

Jill is still being sullen and disinterested in just about everything. Predictably, her teen angst has turned to petty crime, and she stole the baby Jesus doll from the town nativity scene. Even though Kevin deduces almost instantly that she's the culprit, she's mad at him for not caring enough (seven Sullen Teenager Points) and proceeds to abuse and mutilate the doll with her friends at a bonfire. She almost gives the baby Jesus doll a viking burial with a flaming Nerf arrow, but she chickens out, which is really a shame because that alone would have earned her twelve Sullen Teenager Points. She recovers with three bonus STPs for not giving any effs when she walks away from her bewildered and disappointed friends afterwards though. Phew! That was a CLOSE one. If Jill manages to make it through a scene without earning any STPs, I don't know what I will do.

Disfunction Rating: 8. Aside from Kevin, Jill appears to be the most well-adjusted member of the family at first glance, but this is only because she's not actively involved in any kind of cult. She's actually really, really screwed up and should start therapy about six months ago.

Tom Garvey has the honor of starring in the storyline that makes the least sense on the show. Even the GR makes more sense than whatever the hell is going on with Tom, who is now acting as the World's Worst Bodyguard to pregnant Christine and waiting for a phone call that seems likely to never (EVER) come.

It's hard to describe much else about what's going on with Tom because I'm not even sure Tom is supposed to understand it. We end with him and Christine discovering an overturned shipment of human body replicas that people have ordered to replace those lost in the Departure (so they'll have someone to bury). It's almost (but not quite) as creepy as the GR stealing people's irreplaceable family keepsakes.

Disfunction Rating: 10. Laurie might be in a cult, but Tom is in something that seems even deeper and more sinister, mostly because it's clear that he doesn't really know what he's involved with exactly. Every time he picks up the phone, I find myself rooting for him to call Kevin, which is a shame since Kevin a hot mess, too. That's how bad things are for Tom.