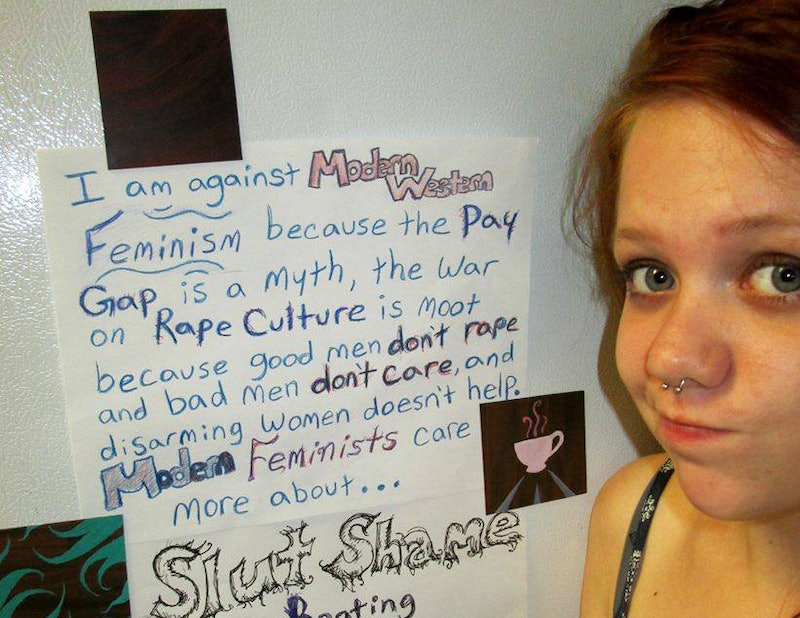 Call me overly optimistic, but I thought that the outdated image of a feminist as a bra-burning, rage-filled, hairy-legged, smelly, rude, oppressive misandrist had gone out the window years ago. Now that there are plenty of relatable feminist icons to look up to, from Notorious RBG (that's Ruth Bader Ginsburg, for those of you not in the know) to Beyonce, you'd think that feminism wouldn't be a dirty word anymore. Not so, according to the scarily popular new Facebook group "Women Against Feminism," which seems to have some severe issues with understanding what feminism actually is.

According to its Facebook page, Women Against Feminism is for "women's voices against modern feminism and its toxic culture." Members post photos of themselves holding pieces of paper on which they've written their reasons for not needing feminism. With over 10,000 likes, it's becoming a force to be reckoned with — and, like White Women Against Feminism before it, it's fueled by serious misinformation and ignorance.

Let's begin by what "feminism" actually means. According to Merriam-Webster, it is "the theory of the political, economic, and social equality of the sexes." (Incidentally, it is this definition of feminism that Chimamanda Ngozie Adiche uses in the TEDxtalk that Beyonce samples for "***Flawless.") Nowhere in the foundations of feminism is there an explicit message of hatred against men, or an indication that women are superior to men. That's called misandr y , and it is just as regrettable as racism, sexism, ageism, or any other discriminatory behavior. Of course, there are some women who call themselves feminists and act more like misandrists — just like there are people who identify as Democrats, Republicans, Muslims, or Christians without accurately embodying what those terms actually mean. That doesn't mean those groups are defined by the outliers.

Here are some of the infuriating images from the group:

Hmm...what about the time when the feminist movement resulted in the right to vote? Perhaps the time when women's employment rose from about 37.7 percent of the total female population in 1960 to 58.6 percent in 2009? Or the time when historically-male colleges began to relax their rules and admit women? (Neither my mother nor I would have received an education at our alma mater, the University of Virginia, otherwise — it was vociferously all-male until 1970, when a civil rights lawsuit forced it to become co-educational.)

...right. Because you're only a feminist if you decide you don't want to shave. Feminism is about letting you do whatever you darn please with your body, whether that's shaving off every hair that grows on you or letting every single one remain undisturbed.

News flash: the pay gap is not a myth. It exists in almost every congressional district in the U.S. The overall ratio between men and women's pay is 77 percent (meaning that, on average, women make 77 percent of what men make). You sure you want to call that a myth?

Oh, you mean the historically-ingrained patriarchy we inherited as a Western culture? If we define a patriarchy as a male-led society, then...doesn't the face that only 18.5 percent of Congress is comprised of women make us sort of, you know, patriarchal?

Hey, I'm totally down with feeling sexy as heck. But what about women who don't want to be looked at, even if they are wearing a top like that?

...OK, I need to stop before steam starts shooting out of my ears.

But in case you want to read more, here's a great article at RYOT about why these women still need feminism.