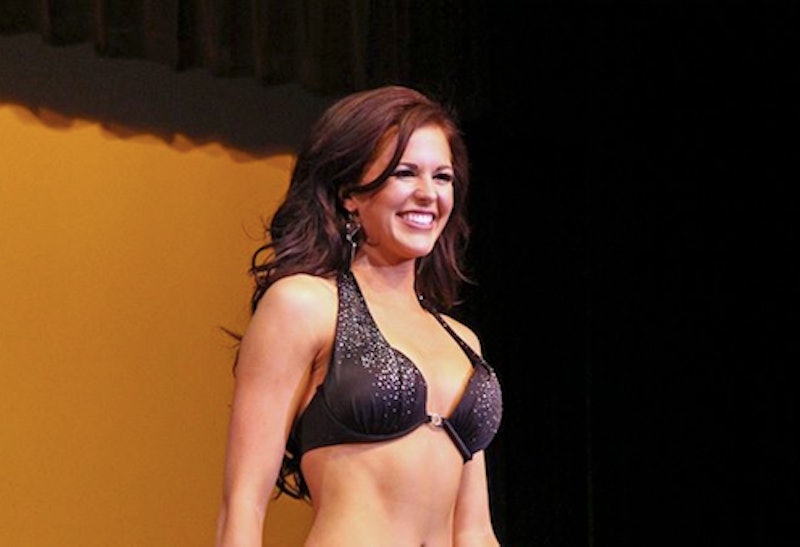 There is something to be said about a person who isn’t afraid to admit that they aren't perfect — especially when that person is a beauty contestant and that flaw can’t be hidden by any amount of double sided tape or pancake makeup. This is why Miss Idaho 2014 winner Sierra Sandison has rightfully earned a place in spotlight: she wore an insulin pump during the swimsuit portion of the competition last week. The greatest part: she’s inspiring others to show off theirs with her #showmeyourpump hashtag.

According to Sandison’s blog, she was diagnosed with Type 1 diabetes in February of 2012. Although she denied her condition at first, after deciding to use the pageants as a way to help charities that dealt with the illness, Sandison became more and more confident about herself as a diabetic. During that time, she supported and raised funding for Children’s Miracle Network, and now works with Possibilities for Disabilities. After two years, she finally decided to show off her insulin pump (an aid that controls her diabetes) during the swimsuit portion of the Miss Idaho 2014 competition. Why? Because she was inspired by a former Miss American winner who decided to show hers:

“…I heard about Nicole Johnson: Miss America 1999. She wore her pump while competing at Miss America. My whole perspective changed.”

She explains in the blog post that one’s flaws shouldn’t prevent them from reaching their goals — and even describes her choice as beautiful:

"The media often tells us this lie: if your appearance deviates in any way from cover girls, movie stars, super models, etc., it is a flaw and something is wrong with you. Well, guess what? Miss America 1999 has an insulin pump, and it doesn’t make her any less beautiful. In fact, in my mind, it enhances her beauty! So, a year after I was diagnosed, I got a pump. It helped me get even better control of my diabetes, and made my life SO much easier. Working up the confidence to compete with it was an entirely different journey, but this summer at Miss Idaho 2014, I finally did it."

The best part? Before stepping onstage, she was approached by the current Miss Idaho’s Outstanding Preteen McCall Salinas, who was also diagnosed with diabetes. After receiving praise from Salinas for her decision, the two bonded over diabetes and pageant life.

Wait. Sorry, did I say that was the best part? It actually gets even better.

After winning her crown, Sandison posted a selfie of her wearing the insulin pump clipped to her bikini bottoms with the hashtag, #showmeyourpump. As a result, Instagrammers across the globe have been proudly posting selfies of their pumps.

Sure, we could sit here and talk about how beauty pageants aren't exactly the greatest thing when it comes to feminism. We could also talk about how just because she wore an insulin pump during the swimsuit portion of one doesn’t change the fact that there’s still a swimsuit portion. Or, we can applaud this driven young women who gained the confidence to share one of her greatest struggles with the world, while achieving a huge life goal — and then, in doing so, inspired others to be confident with their own imperfections. Personally, I’m going with a slow clap in praise of this woman — especially in the wake of model Bethany Townsend's choice to flaunt her colostomy bag in selfies. It takes guts to literally put your flaws on display, let alone doing so while working hard to get something you've always wanted. Get it, Sierra Sandison. #showmeyourpump

More like this
Here’s What Sarah Jessica Parker’s Canned Cosmo *Actually* Tastes Like
By Emma Garza
Rihanna & A$AP Rocky’s Astrological Compatibility Proves They'll Be Amazing Parents
By Nina Kahn
Here's How To Practice Self-Love In Small Ways Every Day
By Mackenzie Sylvester
Here's Your Daily Horoscope For May 26, 2022
By Mecca Woods
Get Even More From Bustle — Sign Up For The Newsletter