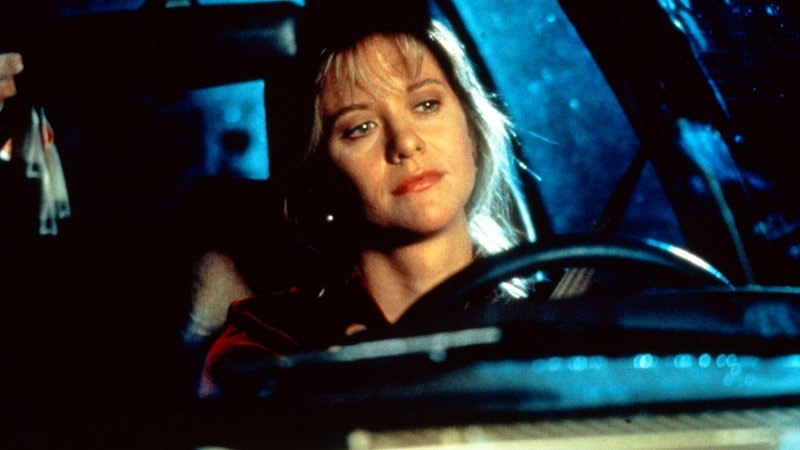 Last week, Bustle ruined your childhood with 11 Awful Truths Behind Disney Movies, which gave you glass-shattering realizations about some of your favorite childhood flicks (racism! Death! Rape! Oh, my…). Today, get ready to have any and all illusions of true love destroyed, because every romantic comedy that shaped your delusions of love and happiness is actually awful. No, but really. These beloved romantic movies aren't just painting a world with rose-colored glasses, they're advocating actual horrific behavior, which ranges from being a bad person to being certifiably bonkers and/or basically terrorizing the objects of the protagonists' affections. You will never look at romantic comedies (or grand romantic gestures or the human condition) the same way again.

So stop reading now if you want to retain the warm fuzzies you feel when you watch movies like Sleepless in Seattle and My Best Friend's Wedding, because love is really just a sham and everyone who thinks they're in love just does terrible, terrible things that should make you hate them, not want to emulate them.

But, if you're interested in knowing which of your romantic favorites are stalkers or rampant sexual harassers (SPOILER ALERT: They're both Sandra Bullock), keep reading.

Think Sleepless in Seattle is romantic? Think again, because Meg Ryan's character is actually a horrible person. She tells her fiancé (who she JUST dumped during a romantic date on Valentine's Day) that she can't wait to meet a random guy she's fallen in love with… and never spoken to. It's the worst.

While You Were Sleeping

Sandra Bullock's character is not adorable. She's a stalker. This family shouldn't welcome her with open arms. They should immediately get a restraining order.

Julia Roberts might be America's Sweetheart, but she's purely cold-hearted in this classic RomCom. Cameron Diaz is the heroine of this love story. Julia Roberts is the villain. Her best friend is genuinely happy and she's hellbent on ruining that.

Aren't long lost loves romantic? Isn't destiny romantic? Sure, maybe. But you know what's not romantic: Expending massive energy (and money) to track down a stranger you hung out with one time just before your wedding to someone else who you actually know.

Sandy isn't a romantic lead in this movie so much as she is a serial lawbreaker. I could let the Green Card marriage slide, but the sexual harassment (forcing a subordinate to MARRY her) isn't cute or funny, it's unforgivable.

Yes, Zac Efron is hot, but that does not excuse the fact that his character is a CREEPY, CREEPY STALKER MAN. He obsesses over Taylor Schilling's character because she "saved his life." Except, she's never met or even seen him. Her picture just happened to be on the ground and catch his eye like something shiny, prompting him to walk, fortuitously, out of danger. Yes, it was lucky for Zac, but that doesn't make it okay to stalk this poor woman and lie to her for months about his intentions.

Ryan Gosling basically terrorizes Rachel McAdams into dating him and also she is terrible.

Lloyd gets Diane to give up her bright future and all of her dreams. Diane was the most awesome girl in her hometown and brimming with potential, and she throws it all away for a guy with a boom box.

Drew Barrymore has a rare form of amnesia that leaves her unable to remember anything new for more than 24 hours. Adam Sandler falls for her and is so in love and dedicated that he decides to make her fall in love with him every single day to make their relationship work. It SOUNDS cute, but what about the days when Drew DOESN'T fall back in love with Adam? Also, by the end of the movie, they are married with a daughter. What about the absolute horror of the days when Drew wakes up pregnant or with a child she'll never remember. Life is a nightmarish horrorscape if you are the Drew Barrymore character.

The hot teacher is lusting after and overtly flirting with a girl he believes is 17.

Jason Bateman switches Jennifer Aniston's donor sperm with his own sperm, thereby impregnating her against her will. This makes him an even worse best friend than Julia Roberts in My Best Friend's Wedding.