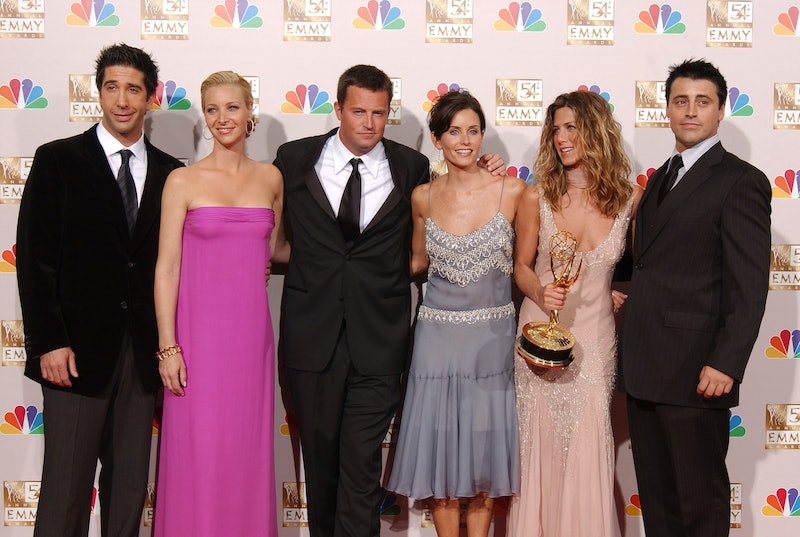 It may have been ten long wintery, desolate years since Joey, Chandler, Monica, Rachel, Phoebe, and Ross left their keys on the girls’ kitchen counter and closed the door to their iconic New York apartment for good, but it seems like the Friends friends are reuniting all over the place right now. On Thursday, Friends' costars Joey Tribbiani and Phoebe Buffay, aka Matt LeBlanc and Lisa Kudrow, were snapped together, along with LeBlanc's girlfriend Andrea Anders, while attending the CBS, CW, and Showtime party for the 2014 Television Critics Summer Press Tour. And as if it couldn’t be anymore perfect, Chandler Bing, otherwise known as Matthew Perry, was also in attendance.

Just a few days before that, Courteney Cox, Kudrow, and Jennifer Aniston — who will always remain in our hearts as Monica, Phoebe, and Rachel — met up for dinner at Craig’s restaurant in Los Angeles. Sadly they didn't get coffee at Central Perk and Gunther wasn't in attendance. And no, they also didn't just sit in Monica and Rachel’s apartment wearing wedding dresses to watch TV and drink beer — as you do when you reunite with your girlfriends — but the sitcom’s leading ladies did celebrate Cox’s newly announced engagement to Snow Patrol band member Johnny McDaid.

The ladies even got to FaceTime with Joey, because obviously he wanted to call them up and ask, “Hey, how you doin’?” (Cue lifted eyebrow and nod.) LeBlanc told People magazine, “I just happened to FaceTime Courteney and she’s like, ‘Look who I am with!’ I was like, ‘Oh, wow, that’s good.’ It’s hard to get together because everyone is all over the place.”

So while five of the six cast mates are busy catching up and sparking a really strong hankering for a Friends anniversary reunion, I can’t help but wonder, where the heck is Ross Geller?

Is he stuck in a stairwell somewhere, trying to move in a couch using the pivot method?

Has he trapped a red convertible in a parking spot and needs his friends to help him lift and slide it out?

Maybe he's trying to even out a spray tan because he counted with Mississippis while in the booth?

Or he could just be stuck in a bathroom because he decided to give leather pants another try.

This could all just a clever set-up for a surprise attack to master Unagi.

Either way, we need you, Ross. I mean, David Schwimmer. These mini-reunions are just not the same without you.