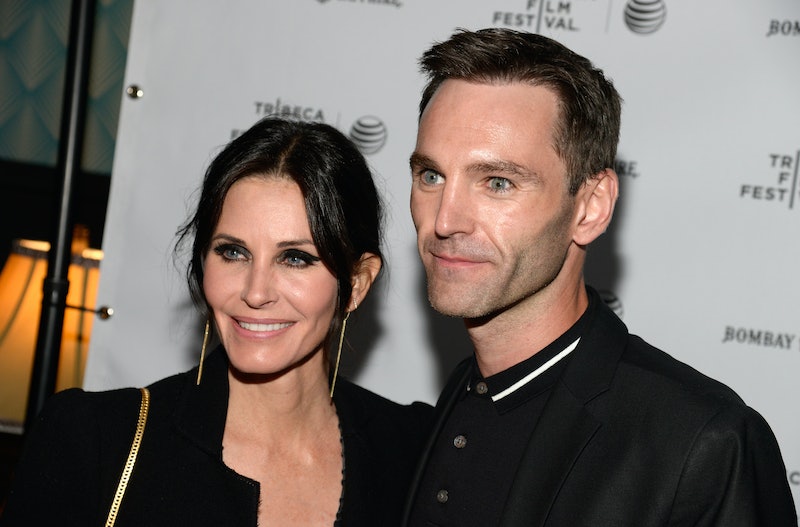 After breaking the hearts of an entire generation by stating that there won't be a Friends reunion, Courteney Cox is back with good news. Admittedly, the news might be hard to see through the tears that a lack of Friends reunion may have caused — unless you're one of those who acknowledges that the concept of Friends wouldn't work today — but it's definitely worth checking out. On Thursday, Courteney Cox and Johnny McDaid announced their engagement on Twitter and we couldn't be happier for them.

Cox and McDaid were first seen together in November when they were introduced at Jennifer Aniston's holiday party by Ed Sheeran. Of course, such a thing comes as no surprise to anyone who knows anything about Ed Sheeran. In addition to his touching love songs and strong friendship with Taylor Swift, Sheeran also sang to a dying fan as soon as he found out about her situation via Twitter. Of course a nice guy like Ed Sheeran is the one to thank for this beautiful love connection.

Their meeting came only a few months after Cox had finalized her divorce from David Arquette, with whom she shares custody of their 9 year old daughter Coco. McDaid, on the other hand, has never been married — until now. The happy couple's Twitter engagement was both simultaneous and adorable. They both tweeted the same picture along with matching messages:

Any and all details about where and how the proposal took place have not been shared yet, but there's already speculation that McDaid proposed during the romantic getaway that the two took for Courteney's 50th birthday in early June. Between Ed Sheeran and Johnny McDaid's band, Snow Patrol, Cox and McDaid are pretty much going to have the best wedding soundtrack ever.

Even if we never get any further details about the proposal, let the engagement ring watch begin.