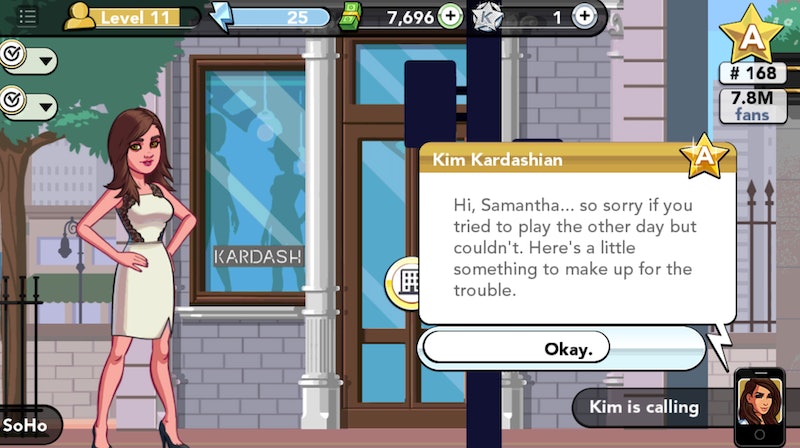 Last Friday, Kim Kardashian: Hollywood crashed. At one point, the iPhone game would temporarily come back to life and instill a false sense of hope in players everywhere. But before we could settle in and finish our photo shoots, the app pooped out again. At first, I assumed something was amiss with my phone and/or my cell reception. I restarted my phone a few times, but it was no use. In the back of my mind, I knew it was a KK:H-only issue, for everything on my phone but the game worked. I just wasn't ready to accept it.

After I spent another 15 minutes aggressively clicking "Try Again," I could live in a world of denial no more. KK:H was down. It would work again, yes, but I did not know that in that moment. I all but had a nervous breakdown in a restaurant.

I checked Twitter to see if there were others who shared my plight, and I found a pile of KK:H-related rubble. Some opted to leave not-so-nice comments on Kim’s Instagram photos (many game players were infuriated that she’d dare to lounge on a beach at a time like this). Emotions were running high. It was not a drill:

Right there with you, Diana.

BuzzFeed's Saeed Jones had no choice but to take matters into his own hands.

This was a recurring hypothesis. I actually started to feel bad for my avatar’s nemesis.

All of the stars, please!

Kim heard our cries. Saturday, she tweet-pologized for the snafu. That tweet-pology would not the last we heard from Kim regarding The Great Kim Kardashian: Hollywood Crash of 2014. Monday afternoon, game avatars received an important call from Kim. (Kim the character, that is. I would not be alive to write this if IRL Kim called me.) She apologized on behalf of the game:

And then, the sky rained with Range Rovers, er, K stars. Twitter was happy again: