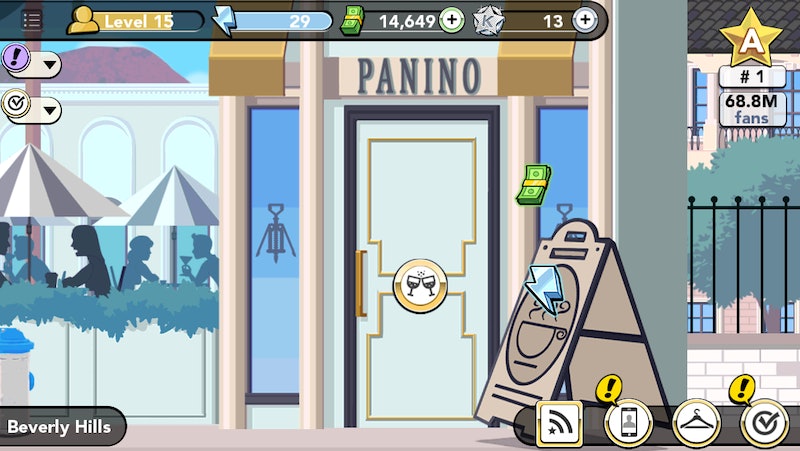 I wouldn’t say I foam at the mouth whenever I happen upon a lightning bolt-shaped piece of energy while playing Kim Kardashian: Hollywood , but I do experience a brief surge of joy every single time. It’s as if the lightning bolts give both my avatar and me a jolt. It's happening. Slowly but surely, I am becoming one with the game.

When the game crashed last Friday, I panicked. My avatar's first major commercial shoot would end soon, but before I could lock in that final star, the game was like “haha, L8R SK8RS. Going to close up shop for the night." I’d already dumped 35+ lightning bolts into the shoot and waited HOURS for my bolt count to recharge. The thought of losing all of that work—and those bolts—infuriated me. (My parents must be so proud.)

Those precious, precious lightning bolts had been flushed down the Miramount Pictures drain.

I explained my predicament to my boyfriend. I tried to convey just how tedious and time-consuming it is to get anything done in the game, thanks to those rare yet necessary bolt-shaped energy slices. Sure, you can spend real money on K stars and use said K stars to obtain more lightning bolts, but I’m not about that life.

So, how does one get by in the game without spending actual cash? The short answer: Patience and tapping.

"You just click shit and hope for bolts?" my BF asked. "That's all you do?"

"You want the long answer?" I asked. He nodded.

Every five minutes, the game will give you a fresh lightning bolt. If you stop playing the game for a few hours, you’ll find your supply of energy has been restocked. Awesome, right? Patience IS a virtue!

Save Up Enough K Stars To Buy More

Go On A Tapping Spree

Tap fire hydrants, seagulls, pigeons, skateboards, newspaper kiosks, beer bottles, plants, et cetera. Why? Snatchable stuff will appear. Dollars, experience coins, and LIGHTNING BOLTS (!!!!) will fly into the air and they are yours for the taking. Before you know it, you'll memorize which objects in each city are the magical goodie-producing objects (it’s not that hard to do. There are, like, three in each city), and you can click 'em with reckless abandon.

Sounds easy enough, yeah? Eh, any KK:H player will tell you there’s a bit of a snag: You must let the aforementioned objects and animals “reload.” (I've yet to time just how long it takes for each object to reload. I'm going to guess five minutes.)

AND! The aforementioned objects don’t always produce lightning bolts. So no, you can’t just click that seagull on repeat and expect to be up to your neck in energy just because it pooped out a bolt that one time. The game is easy, but it isn’t that easy.

My avatar spends a majority of her club appearances jet setting around the world, scouring the planet for energy. (Yes, it's cool if you leave in the middle of a club appearance, especially if it is to procure more energy for said club appearance. And by "energy," I don't mean "cocaine." I mean "lightning bolts.") Of COURSE I'll shell out 35 game dollars to jet on over to Punta Mita only to cross my fingers that the beer bottle on that table will spew up a lightning bolt. It rarely spews up a lightning bolt, but the financial risk is worth it.

Make A Mental Note Of Where You Recently Went Kollecting

Why’s that so crucial? The objects have to reload, remember? Say the Panino sign in Beverly Hills gives you a dollar and a lightning bolt, and then you hop over to LAX to check out what the suitcase has to offer (one dollar). You know what you don’t do next? Cruise back to Beverly Hills.

Instead, check out all of the other cities in the game first. Otherwise, that Panino sign will be nothing more than a non-bouncing waste of bus fare.

If you do a full globe-trot cycle, by the time you return to your first destination, the objects are usually back in business. That Panino sign will be ready to hit you with treasure once again. And then, you can restart the loot racking globe-trot.

You do need a few bolts in the bank for this one, yes, but it is technically a way to score more LBs. Every now and again, you’ll spend six lightning bolts making friends at a club or whatever, and the game will give you a lightning bolt in return. What a nice surprise!

After I finished my long, detailed explanation, I grabbed each side of the dining table and said, "That's what you do."

"Um, okay. It really sounds like you just click shit and hope for bolts," my BF replied.

HE JUST DOESN'T GET IT.