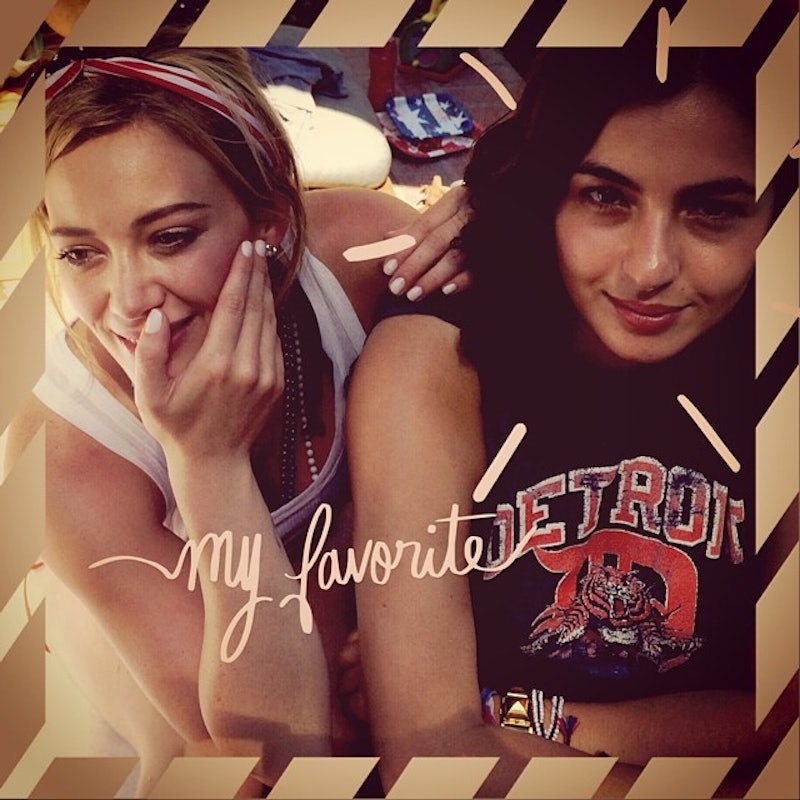 Hilary Duff has a lot to be excited about, with her new single dropping on Thursday, July 24th and marking the former Lizzie McGuire's return to music. To celebrate, Duff and BFF Alanna Masterson got matching ghost tattoos that are to die for adorable. Most wise people caution against getting matching tattoos with a friend or lover, in case the once sweet relationship goes sour. But you know what? Not-so-wise me says do whatever the hell you want.

Duff and Masterson have been friends for 12 years, so even if they hate each other by 2015, it's nice that they'll always have these cool reminders of how tight they were. Plus, I can't get over how cute these tats are. The ghosts, which were done by famed tattoo artist Dr. Woo, appear to be on the ladies' forearms and feature elegant lines and the words "Ride or Die" at the bottom of the rustling ghost sheets.

I'm not sure what the ghosts mean exactly, but I'm into them. Perhaps they are a tribute to Duff's days as Casper's witch companion Wendy in the 1998 classic (I use the term lightly) Casper Meets Wendy . I myself might be tempted to tattoo a tribute to this film on my body, since the VHS got me through many a sick day home from elementary school. And Masterson stars in The Walking Dead. Although the show is about zombies, death is still a prominent theme. I'm detecting a (rather tenuous) thread connecting these tattoos and the acting careers of Duff and Masterson.

Whatever the meaning, I think these tattoos are a lot more clever than the usual matching hearts and initials that best friends tend to favor. Ten points for originality! Check out the ink below.