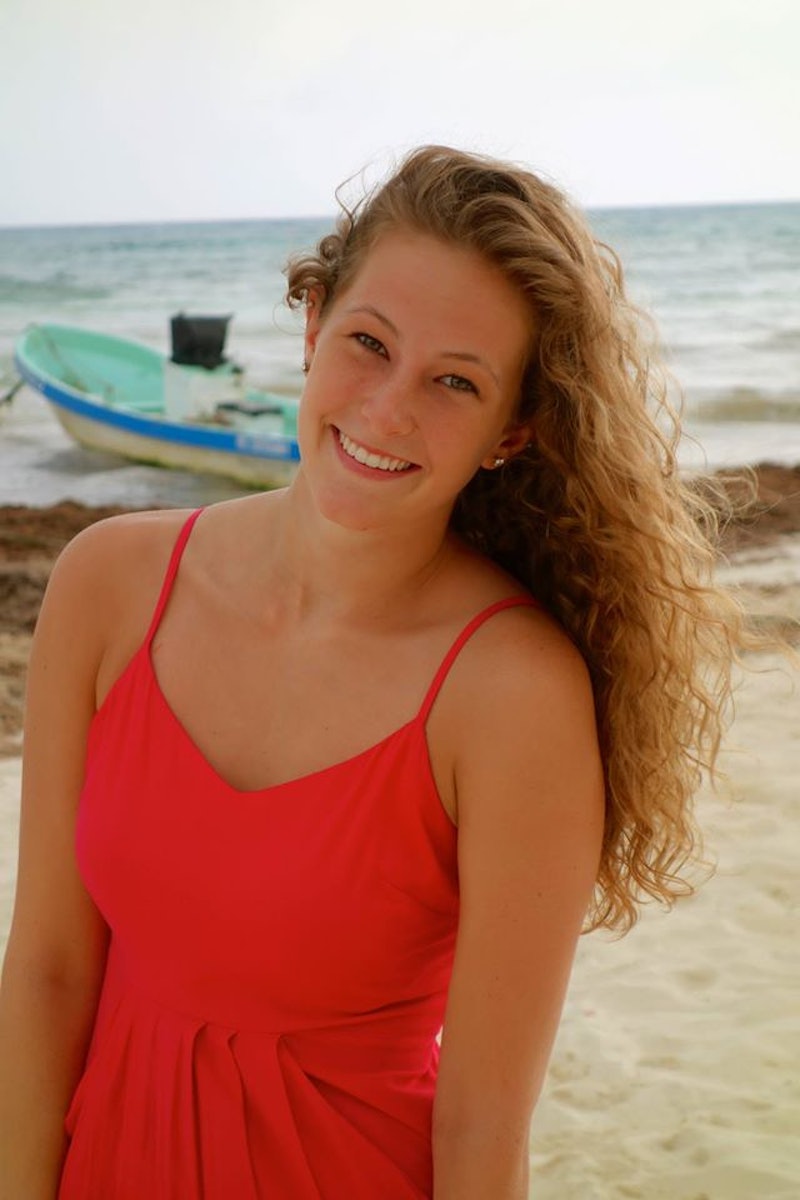 Some women won't leave the house without makeup, others have never picked up an eyeshadow brush in all their lives. To examine the role of beauty products in our socienty 20-year-old Indiana University student Annie Garau decided to go a year without wearing makeup. In an essay penned for a Kentucky website, Garau explains just what she's learned after 200 makeup-free days.

Makeup, while fun for many, is often used as a crutch to help us avoid feeling "imperfect." As Garau states in the beginning of her essay, "I, like many other women, have looked in the mirror and hurled mental insults at what I saw: love handles; weird nose; pale, squinty eyes; thin lips. Makeup helped." But the help that concealers, foundations, and lipsticks provide is not long-lasting. Products serve as a Band-Aid, covering up not the so-called flaws, but the insecurities we have because we perceive ourselves as not good enough.

In her study, Garau seeks to explore the role makeup plays in our larger society. As she puts it, "When 90 percent of women report feeling unhappy with their appearance, a study commissioned by Dove said, and less than 19 percent of our representatives in Congress are female, you have to wonder if there's a connection." She started her experiment on January 1st, 2014, and has not worn a stitch of makeup since.

Most other makeup-related studies are about determining how much women wear versus how much men find attractive. Garau's experiment explores how going makeup-free might affect a woman's daily life — how she's treated by others and how she feels about herself. When attending frat parties at her University, Garau reported feeling much less confident and less likely to draw attention to herself.

I found that most guys thought that they preferred women without makeup, but subconsciously, they were attracted to those who had used makeup in a subtle way. They enjoyed the idea that a woman was naturally beautiful, but they didn't realize the extent to which makeup enhanced that beauty.

Like it or not, looks pay a disappointingly powerful role in our society. Studies have shown that men tip female waitresses who wear makeup significantly higher amounts than their makeup-free counterparts. Attractive people are treated better, paid more, and given more respect. But ultimately, paying too much attention to appearance can affect one's ability to fully participate in the other aspects of life. It's a terrible situation, one that very acutely affects women. Professor Margaret McGlandery told Garau:

I've seen so many of my friends and coworkers, brilliant women, spend so much of their lives and time and money maintaining this ideal," she said. "When we're using these beauty practices, we're essentially draining women's ability to fully participate in political, work and social life. It's a brain drain for girls who are distracted from things that might be more fulfilling.

Garau (and I, for that matter) is not trying to shame women for wearing makeup. Rather, she is trying to point out that women shouldn't have to rely on mascara and blush to feel "normal." We should only wear cosmetics because we want to, not because we've decided we have to or we won't be pretty that day. For more on Garau, check out "The Born With It Beauty Project."

More like this
M.A.C. Is Launching An ’80s-Chic Stranger Things Makeup Collection
By Olivia Rose Ferreiro
Madelaine Petsch's Beauty Routine Is All About Carving Out "Me-Time"
By Olivia Rose Ferreiro
Alicia Keys Just Launched The Dreamiest Skin Care-Makeup Hybrids
By Rachel Lapidos
10 Talc-Free Makeup Brands For Safer Eyeshadows, Powders, & More
By Audrey Noble
Get Even More From Bustle — Sign Up For The Newsletter