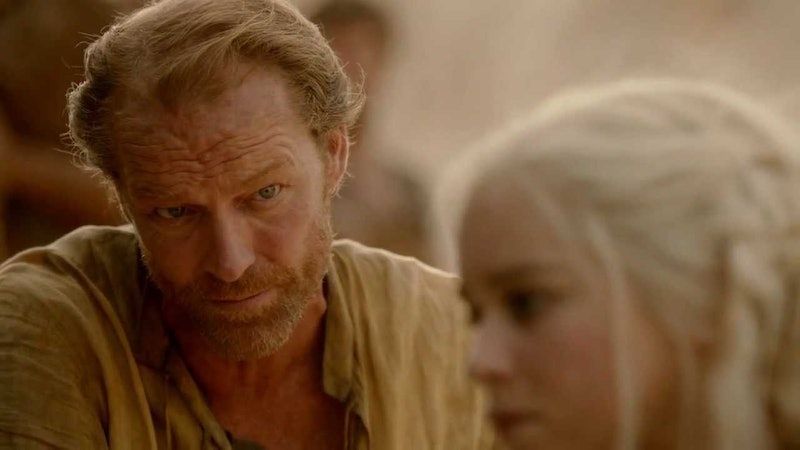 While the concept has existed since the beginning of time, it has only recently acquired a Merriam-Webster definition. The friend zone (noun) is a defined as follows: a platonic friendship between two people, one of whom wants the relationship to be romantic. It is, in layman's terms, a pickle. Two friends have a relationship one wants to further romantically, and the other just wants to be friends. Most of us have been there, and whether we are in the friend zone or the friend-zoner, it isn't a fun place to be.

Urban dictionary captures being trapped in the "zone" with their definition:

What you attain after you fail to impress a woman you're attracted to. Usually initiated by the woman saying, "You're such a good friend". Usually associated with long days of suffering and watching your love interest hop from one bad relationship to another. Verb tense is "Friend-ed"

Whether you're you're Jorah Mormont lusting after the unattainable Khaleesi on Game of Thrones, or Ducky in Pretty in Pink, here are the 13 signs you know for certain you're in the dreaded friend zone. And while we go back and forth using different pronouns in this article, it goes without saying that men can friend-zone women, women can friend zone women, and... you get the idea.

he only asks you to hang out in groups

A tell-tale sign of friendzoning is the constant group hang. If he or she never asks you to hang out alone, or ignores your requests to do so, this person is probably trying to avoid spending any time with you that could be perceived as romantic. Group hangs means theres always another person or two to act as a buffer if things get ... weird.

she offers to be your matchmaker

If the person you're interested in tries to set you up with people he/she knows, you are in the friend zone. No, this person is not flirting. Obviously, if said person is spending energy trying to find you a date, they either a) think you are an awesome person and genuinely want you to be happy with someone that isn't them, or b) have a feeling of your intentions and are attempting to tell you, in so many words, that you'd be better off with someone else.

He avoids hanging out with you at night

Night time = sexy time. There's no way around it.

Your relationship exists at least 50 percent over texting/gchat

This is another bad indicator of being friendzoned. Clearly, the person you're interested in likes talking to you, but with the safety net of text message and gchat, things can never get too out of hand.

I wouldn't call it insensitivity, but when a friend asks you to introduce him/her to your attractive coworker or bff of the opposite sex, they think you're close enough pals to be a wingman. And only platonic, non-sexual friends help friends get laid.

sHe comes to you with relationship problems

No, he/she isn't trying to be cute and get you to think in terms of what your relationship together could be like — they just want some sound romantic advice from a solid friend.

He refers to you as "adorable" and "hilarious" but never "sexy," or "hot"

Listen to the words in which your interest describes you. If "attractive" or some word similar to it isn't in the mix, you might be out of luck.

sHe only wants to hang out in public

He checks out other girls when you're hanging out

Sometimes, people in relationships do this too, albeit disrespectfully, but if your interest is openly eyeing the cute bartender or coffee shop patron while you're out, chances are they have no clue you have romantic feelings.

sHe recoils at your touch

I recall a guy friend saying once that a good way to gauge a woman's interest in you is to "touch her in a playful way and see how she responds." Does she playfully touch you back, or does she grimace and walk several feet away? Perhaps the response won't be so extreme, but a reaction to physical contact is a good indicator of attraction.

she labels other girls you pass "your type"

Close friends know what kind of people the other person is attracted to — redheads, bookworms, athletes — most people have a type that their close friends are all too aware of. So when the person you're interested in calls someone out as "your type," it is probably an indicator that you are not their type.

she doesn't mind consistently wearing sweatpants when you hang out

While I'm not advocating a full face of makeup and a ball gown for each hang out, if you like someone, chances are you'll put a tad bit of time into how you appear in front of that person. Whether its a coat of mascara or wearing a T shirt of his/her favorite band, effort usually equates to attraction. Constantly wearing sweatpants and not showering for three days before hanging out is behavior only close friends tolerate.

Unless you are a character in Flowers in the Attic, brothers and sisters don't usually think of one another in sexual terms. If he calls you "sister" he really means it: You're like a sister to him.