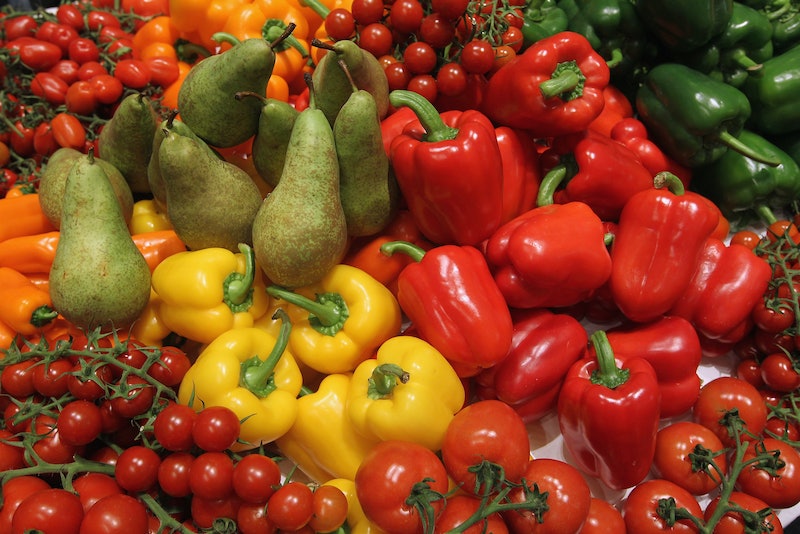 Has the recent Internet chatter about grapefruiting piqued your curiosity, but left you with a lot of questions? Are you intrigued by the idea of a natural, low-cost way to spice up your trips to the bone zone, but fear the possibility of free-flyin' citrus juice ? Does grapefruit give you acid reflux? Do you need those grapefruits for breakfast tomorrow???If you answered "yes" to any of the above questions, don't worry! There's still an easy and food-filled solution to your sexual dilemmas. Even if you think that grapefruits belong on the kitchen table, not on a boner, know that your local grocery store or greenmarket is chock full of fruits and veggies that can, in a pinch, be turned into sexual playthings.And while there are no formal surveys of which fruits and vegetables people use most during sex, there are some clear favorites out there. So let's sit down and survey the most popular (or just most fun-seeming) produce that people use in and around their fun parts. But first, a word of warning: the sugar in fruit can lead to a rather unsexy yeast infection or other problems when placed directly onto your delicate bits. So your best bet is to keep these fruits and vegetables restricted to above (or below)-the-vag play, wrap them in a condom, or otherwise keep them from making full-on contact with the delicate parts of any genitals. And remember to put a towel down!With that noted, let's get down to business. It's summer! Time to make a nice, big salad! And then have sex with that salad!

Even without the use of formal surveying technology, I can tell you that using a microwaved melon with a hole cut in it is one of the most popular forms of food sex — so popular, it’s even got its own Urban Dictionary listing. Obviously, this method has its own dangers (i.e. that roof-of-the-mouth burn you get from eating a too-hot microwaved slice of pizza, except on a penis), so if you choose to experiment with this one, handle with caution.

The gold standard of sex vegetables, cucumbers will be considered snicker-inducingly sexual long after the earth has fallen into the sun — and for good reason! They pretty much look like penises, and people love to shove them into their orifices. I've heard this referred to as "cuke-ing," and I would not recommend trying this at home.

Though these are a less obvious one, they should be standard in anyone's food-sex arsenal, especially in this heat. You can grab a handful of frozen grapes and go to town on someone's back/ shoulders/ thighs/ etc the way you would with some ice cubes, with the added bonus that grapes won't melt. Note: your grapes will probably not turn out to actually be Matt Damon in a grape costume, but you know what? It could happen. Don't stop believin'!

While a full pineapple is pretty awkward to hold even while fully clothed, pineapple rings can totally work as a penile garnish. But make sure to wash that penis thoroughly afterward before you bring your holes anywhere near it.

Part of a proud American on-screen sexual tradition that we can trace all the way back to 1999's Varsity Blues (or even earlier), cherries are more of a topping than a main course, both in life and in bed. But they're neater and a lot less likely to shoot juice everywhere than a lot of items on this list, so they're a low-stakes item to incorporate into an evening of food-bangin'. Just make sure to have a bowl on hand for the pits.

Historically considered by some to be an aphrodisiac, yams aren't really a mainstream sex-food these days. But pureed yams are pretty delicious, and sometimes there's a gain of truth to the foods that people thought were aphrodisiacs in the ye olden tymes...just sayin'.

While you're certainly free to utilize a coconut in any way that your heart/ mind/ throbbing loins can imagine, coconut oil is actually having a moment as an alternative to traditional lube. Though there haven't been any formal studies on its effectiveness or side effects yet, gynecologists have noticed many women with sensitivities to standard lube dig it. Just don't use it with any latex condoms, and also, buy a little bit extra to use as a conditioner, because that stuff is BOSS on product-damaged hair.

The strawberry's smooshier, more pliable cousin, the raspberry is a bit less popular, but ideal for more delicate sexytimes — you know, foreplay that is more about a nibble than a chomp.

OK, fine, this one is all me. I could not find anyone to back me up on the idea of avocado as a sexual toy. But I think avocados are a good idea! They're soft! They're squishy! They're full of Vitamin C! And aren't their inherently sensual qualities what drives you to pay extra for that guac at Chipotle? I'm just saying, consider it.

More like this
13 Ideas To Add To Your Sex Bucket List
By Kristin Magaldi
35 Sexy Texts To Send Your Partner
By Griffin Wynne and Carolyn Steber
What Are Swingers? Everything You Need To Know
By Lexi Inks
Starbucks Released New Menu Items For The Summer
By Emma Garza
Get Even More From Bustle — Sign Up For The Newsletter