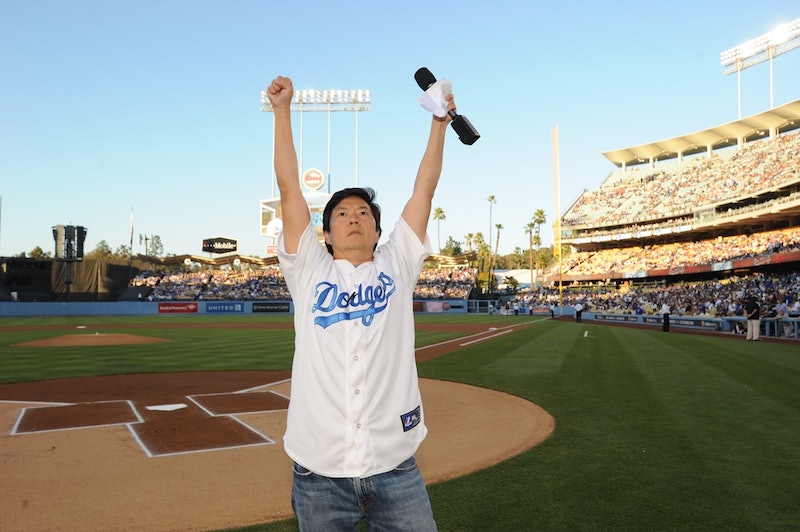 Good news, Señor Chang fans: Ken Jeong has been tapped to play himself in an MTV comedy pilot. (But don't freak out — his new role will not get in the way of Jeong being hysterically weird and slightly frightening on an emotional level on the recently renewed Community . Thank god.)

According to The Hollywood Reporter, Jeong is set to star in the self-titled Ken Jeong Made Me Do It , a coming-of-age comedy co-written by Andy St. Clair (Arrested Development) and Paul O'Toole. The show, which changed its name to reflect the highly sought-after actor, follows a 22-year-old named Andy "who, after catching his girlfriend cheating, accidentally rear-ends Jeong's fancy car. Taking pity on Andy, Jeong takes it upon himself to teach him how to man up." (Can we all just pause for a moment and reflect upon how amazing this show title is? We can already imagine the laugh-out-loud possibilities.)

But here's the thing: How did Jeong even get to this superstar level? Wasn't he a doctor, like, yesterday? Now he's starring in his own show that's titled after his own name — that's seriously impressive. Let's take a stroll down "Ken Jeong Memory Lane" to figure out when he became the "It" actor he is today:

Dr. Ken Jeong, at your service.

According to an interview with NPR, Jeong would let off some steam after a long day of medical work by performing comedy sets on various stages.

While still practicing medicine, comedy sets eventually turned into acting on the small screen until 2007 when he got...

His big break: Knocked Up.

The doctor-turned-actor credits his big break to Judd Apatow and Knocked Up, which lead to...

His second big break: The Hangover.

Who could ever forget Mr. Chow? "That changed my life overnight," Jeong says in his interview with NPR. "It changed everything for me. ... I always say Knocked Up opened the doors and The Hangover just burst it wide open."

The rest is history.

Since The Hangover, Jeong has pretty much become a staple in the Hollywood circle. From playing his insane Community alter-ego to voicing endless animated characters to his long-list of upcoming roles, Jeong has proven that he's not going anywhere anytime soon.