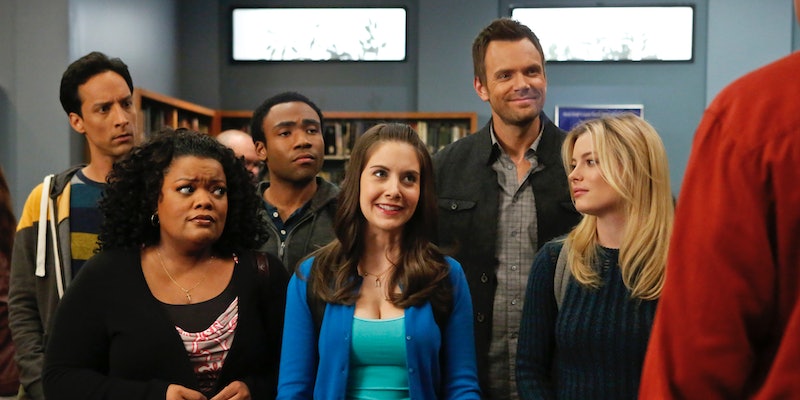 Community has had its ups and downs in terms of creativity (primarily when Chevy Chase caused big drama and broke his contract to leave the show, and when showrunner Dan Harmon was pushed out from the show despite the fact he created it ) but most fans can generally agree that, with Harmon back helming the show, last season it was one of the best that she show has produced in a while. That in mind, it came as a major shock when NBC decided to can the show — yes, NBC is a business and sometimes ratings really do matter over quality, but, despite a small audience, it was season five! The show was literally thisclose to the show's goal of reaching six seasons and a movie. Thisclose! Luckily, though, Yahoo! ended up turning into the series' proverbial white knight, and, as reported last night, has picked up the show for one last season, a.k.a. season six, to stream online. And now, it looks like a Community movie is definitely on as well. Everything is happening!

The (albeit unofficial) confirmation about the possibility of a Community movie comes from Sony Pictures Television president of programming and production Zack Van Amburg, in an interview with The Hollywood Reporter about Yahoo!'s eleventh hour pick-up of the series:

There’s no way we’re not making the movie now! I think once we make the movie, let’s look up and decide how much more Community the world wants. We promised six seasons and a movie, how much more do you want?! [Laughs.] … I’d be lying if I told you that we have not had some very early and preliminary conversations that are very exciting about what a potential movie could be and who might direct it. It’s early but it’s completely in our thought process.

Couple that with the news from this past March which detailed Harmon confirming that Community will get a movie if he has anything to do with it — even if it has to be "made out of clay and duct tape in [his] basement" — and it really seems like this project is really going to happen. Considering how devoted the cast and crew has been to the show despite its ups and downs, dwindling ratings, repeated forced hiatuses, and cast drama, there is literally no other show more deserving of this. And with Community's creative drive at an all-time high thanks to Harmon, there's little chance it won't be amazing as well.

In other words, it probably won't turn out like this.