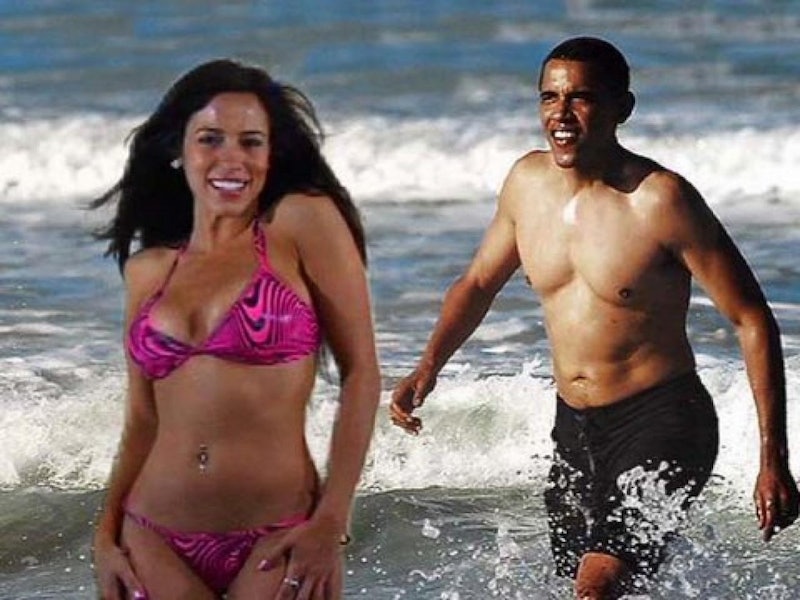 When Barack Obama won the presidential election in 2008, he had one very notable supporter — the "Crush On Obama girl, Amber Lee Ettinger. The Obama campaign relied on creative marketing tactics, and Ettinger's video served as a prime example of untraditional engagement techniques. But despite the popularity of the video, Obama and his marketing team weren't exactly pleased about the slightly raunchy performance.

Originally released on June 13, 2007, the video was the collaborative effort of a small four-person team that managed to strike comedic, political, and somewhat sexual gold with their three minute song. The video's producer, then-32-year-old advertising executive Ben Relles, later told ABC News that he hoped the video would help Obama's campaign, though we'll never know exactly how Ettinger's performance affected the race.

While Obama's marketing team never commissioned or endorsed the video, the viral hit certainly helped bring attention to the presidential candidate (perhaps in an entirely different light). Obama's strategists, who revolutionized political usage of social media, including Facebook, Myspace, and Twitter, had not prepared themselves for the beast of YouTube. But two successful presidential campaigns later, it certainly doesn't seem as though Relles, Ettinger, and company did the Obama team any harm.

Now, more than seven years later, is the Obama girl still watching her president on C-Span?

Wait, What is this video?

If you thought you were an Obama fan in 2007, Amber Lee Ettinger gave you a run for your money. Taking the concept of an "Obama supporter" to a totally new, slightly inappropriate level, Ettinger wanted Obama in office for reasons that seemed to extend beyond his political platforms and policies.

The vocals for the song itself was performed by then 21-year-old Leah Kauffman (the star of the 2012 reprise), a student Temple University in Philadelphia, who collaborated with her friend Ben Relles to write the lyrics, and with producer Rick Friedrich to write the music. But it was model/actress Ettinger who brought the song to life in the video.

What was the point here?

Interestingly enough, the video was not made with the express purpose of supporting the Obama administration. Though Relles was certainly a fan of the future president's, he was more interested in producing a funny video than making a political statement.

As an advertising executive, Relles' mission was simple: he wanted attention. And in 2007, one of the fastest growing segments of comedy was political humor. Consequently, Relles decided to create a company that would focus on politics as fodder for laughter, which he entitled BarelyPolitical. Said Relles to the Huffington Post, "I want BarelyPolitical to be the source for political humor this election year," and in 2008, it certainly seemed as though Relles and his team had succeeded.

Well, Obama himself might have liked it, but you know who didn't? His daughters. Sasha and Malia Obama, then just nine and six years old, were reportedly upset by the video. While the rest of the more adult world may have been amused by the risqué song and dance routine, Obama's children were less than enthused about having a strange woman putting the moves on their dad through a YouTube video.

According to a CNN report, Obama told the Associated Press, "You do wish people would think about what impact their actions have on kids and families." When Ettinger was told of Obama's reaction to the video, she applauded the president for being a good father, telling the New York Daily News, "I think he's more concerned over his child's reaction to it. That's good parenting." That's a true fan.

Does the Obama girl love Obama in real life?

While the video wasn't designed as a vote-for-Obama ploy, it would certainly make sense to cast an Obama supporter as the lead actress, right? Well, sort of. Ettinger was never exactly forthcoming about her political leanings, but did cast quite a bit of doubt as to how loyal she really was to her "B to the A to the R-A-C-K-O-B-A-M-A."

In an interview with Steppin' Out magazine, Ettinger suggested that another Democratic candidate had won her heart. Said Ettinger, "I have to say I'm very impressed with Hillary Clinton. I watched the recent debates and I liked a lot of her answers!" So maybe we can expect another video from Ettinger if and when Hillary ever decides to announce her candidacy for 2016.

Since realizing the enormous potential behind a viral video, and really, videos in general, Obama has certainly made moves to utilize the platform to his advantage. Drawing upon FDR's famous legacy for inspiration, Obama has actually filmed weekly Fireside Chats since he was first elected in 2008. Of course, today's fireside chats look and sound very different from those of FDR's generation, but both men certainly knew how to take advantage of contemporary technology.

Moreover, earlier this year, Obama put together a team to serve as a different breed of political advisors, with the purpose of brainstorming ways to reach current voters through YouTube. And of course, Ben Relles was part of that team. Relles has come a long way since launching BarelyPolitical, as he now serves as the Head of Creative Strategy at YouTube.

Not bad for a guy who just wanted to make some people laugh with a song about a schoolgirl's crush.

More like this
Mollie King & Stuart Broad Just Shared The First Pic Of Their Baby
By Sophie McEvoy
Stormzy Was The Ultimate Fanboy When He Met Taylor Swift
By Sophie McEvoy
The 'Love, Lizzo' Harry Styles Scene Is Just 1 Moment That Made Fans Feel Seen
By Brad Witter
J. Lo Just Announced A New Album — And Ben Affleck Inspired At Least 1 Song
By Stephanie Topacio Long
Get Even More From Bustle — Sign Up For The Newsletter