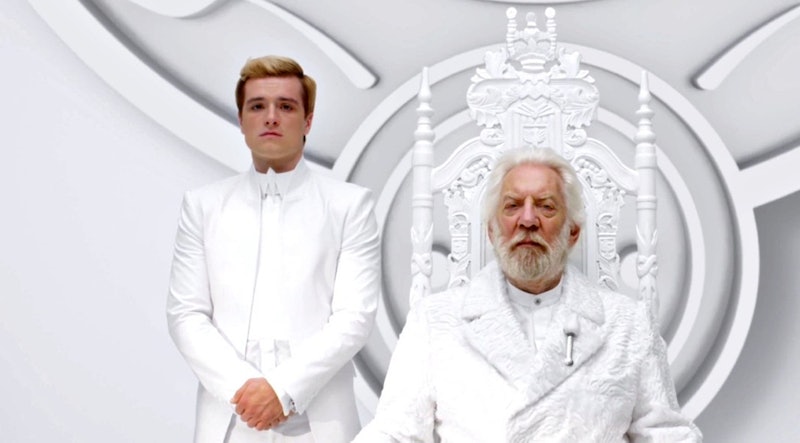 There is something sinister stirring in The Capitol. This might be the most obvious statement in the world to anyone who knows the concept of The Hunger Games, but Lionsgate's really driving it home with these Mockingjay teasers and other promotional materials. The latest, for example, has them showing off their victor mascots once again. It's a message that's obviously supposed to come off as regal, but you can sense that not all is right here even without having any idea what the books are about.

In Mockingjay the novel, the Capitol's capturing of Peeta is a source of constant distress for Katniss. This is made worse when [minor spoiler alert for the first half of Mockingjay] President Snow starts actively rubbing his control over Peeta in her face. We've already established that the Mockingjay marketing team is using tansmedia to basically act out parts of The Capitol's anti-rebellin strategy, and this newest display of Peeta and Johanna as living portraits plays into that. Though in the novel we don't hear much from Johanna while she's being held by Capitol forces, the moment when Katniss is confronted with Capitol Peeta is a rough one. From Mockingjay:

A sound escapes me. The same combination of gasp and groan that comes from being submerged in water, deprived of oxygen to the point of pain. I push people aside until I am right in front of him, my hand resting on the screen. I search his eyes for any sign of hurt, any reflection of the agony of torture. There is nothing. Peeta looks healthy to the point of robustness. His skin is glowing, flawless, in that full-body-polish way. His manner's composed, serious. I can't reconcile this image with the battered, bleeding boy who haunts my dreams.[...] In the silence that follows, I notice the lines that have formed between Peeta's eyebrows. He has guessed or he has been told. But the Capitol has not killed or even punished him. For right now, that exceeds my wildest hopes. I drink in his wholeness, the soundness of his body and mind. It runs through me like the morphling they give me in the hospital, dulling the pain of the last weeks.

This is the moment that keeps popping into my head whenever Josh Hutcherson is included in one of the "Capitol"s messages. That's almost definitely Lionsgate's intention here — and they're doing a pretty good job so far, especially given we've still got a week to go before we actually see a legit trailer. In the meantime, we've got some more glimpses into President Snow's war prisoners. Take note of the nervous ticks in their hands and faces.

And our dear Peeta: