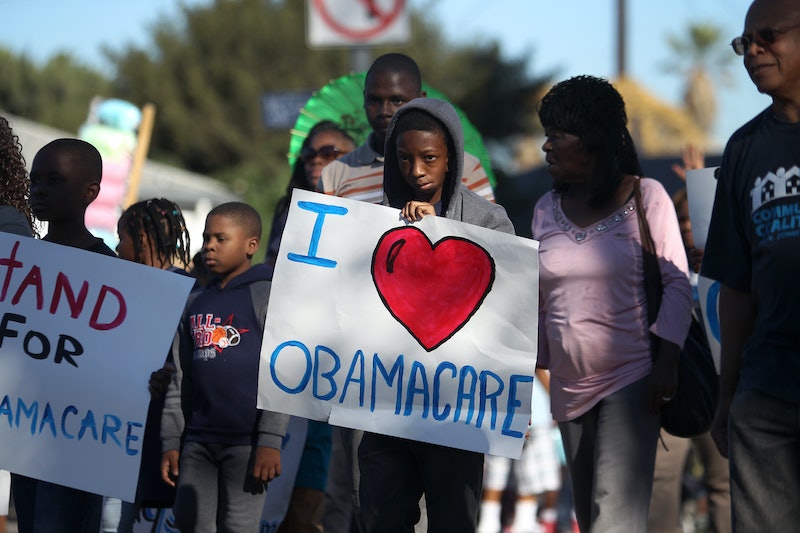 On Tuesday, two federal courts issued conflicting rulings on a lawsuit that could fundamentally cripple Obamacare. The case, Halbig v. Burwell, has been called “the most significant existential threat to the Affordable Care Act,” and it centers around the federal subsidies that the law offers for use in purchasing health coverage. If the case is ultimately successful upon appeal, around six million low-income Americans could be stripped of the health care plans they’ve already purchased. Oh, and premiums could skyrocket as well.

In short, the lawsuit argues that only people who buy health care via HealthCare.gov, as opposed to state-based exchanges like Covered California, are eligible for federal subsidies. It’s based on a narrow reading of the text of the law — indeed, one single sentence of the law — and while defenders of the law refer to the statute in question as “a glorified typo,” that typo has the potential to damage Obamacare more so than any of the challenges before it — including the 2012 Supreme Court Case centering on the constitutionality of the individual mandate.

So, how did the courts rule? Will the rulings stand? And if they do, what will it mean for everybody else’s health care plans? Here’s what you need to know.

What’s the basic premise of the lawsuit?

The Affordable Care Act offers subsidies to low-income Americans who want to buy health coverage. Halbig centers on the specifics of how those subsidies are distributed. Specifically, those who filed the suit are arguing that people who buy health care on state-based exchanges aren’t eligible for federal subsidies. The plaintiffs are two libertarian economists who don't like Obamacare.

What’s the difference between the state and federal exchanges, again?

Both kinds of exchanges are centralized online systems through which people can compare different health plans, see which federal subsidies they qualify for, and use those subsidies to buy health coverage. The original intent behind the Affordable Care Act was for each state to set up its own exchange, but Republican politicians in 34 states refused to take steps to do so. As a result, a federal exchange was created — that’s HealthCare.gov — so that people who live in those states can still receive federal assistance when buying health plans.

But why wouldn’t people on the federal exchanges qualify for subsidies?

The argument boils down to one line of text in the Affordable Care Act stating that people qualify for premium assistance — that is, subsidies — only if they’re “enrolled in through an Exchange established by the State.”

It’s those last two words — “the State” — upon which this lawsuit hinges. The plaintiffs believe this implies that only people who enrolled in state-based exchanges actually qualify for premium assistance. If this interpretation is true, it would mean that only the residents of 17 states are actually eligible for Obamacare’s premiums.

Is that how the law was intended?

No. The goal of Obamacare, as stated in the bill’s full name, is to make health care more affordable, and this lawsuit makes it less affordable (more on that later). The New Republic’s Nate Cohn explains why it’s absurd to suggest that the lawmakers intended to prohibit people on federal exchanges from getting subsidies:

Not once in the 16 months I reported on the formal congressional debate did any of the law's architects suggest they were thinking along these lines. It wouldn’t make sense in the context of the law, which depends upon those subsidies to accomplish its primary goal. It's why assessments of Obamacare’s impact, including those from the Congressional Budget Office, assumed that residents of all states would have access to the tax credits.

A number of other experts — see here, here, here, here — have also agreed that to interpret the law as the plaintiffs did is antithetical to the entire reason for the law to begin with.

If that’s not enough, the primary author of the bill — former Senator Max Baucus — said through his spokesperson that “the clear intention of the health care law is to provide consumers with tax credits [subsidies] to purchase quality, affordable health coverage through either a state or a federally-facilitated exchange.”

so what exactly happened Tuesday?

A three-judge panel on the U.S. Court of Appeals For the District of Columbia found, in a 2-1 ruling, that people on the federal exchanges are not eligible for health care subsidies. Within hours of that ruling, the Fourth Circuit Court of Appeals upheld the subsidies in their entirety.

so What happens now?

Well, the expectation is that ultimately, the case will reach the Supreme Court. Before that happens, though, the full D.C. Circuit court (not just a three-judge panel) will likely review the case; considering that the full D.C. circuit has more Democratic-appointees than Republican-appointees, it seems likely that they’ll reverse the ruling.

What happens if the Supreme Court rules against the subsidies?

It’s not entirely clear, and it would depend on the language of the ruling. In general, though, this would mean that everybody who enrolled through Obamacare through a federal exchange and received federal subsidies — in other words, low- and middle-income people in red states — would no longer be eligible for discounted rates, and so their premiums would suddenly skyrocket.

who would be affected?

While it’s impossible to say now how many people would be affected by such a ruling in mid-2015 — the earliest the court could hear the case — Kevin Drum estimates that roughly six million people would see premium hikes. Because these are mostly low-income Americans, many of them flat-out wouldn’t be able to afford their plans anymore, and would thus go uncovered.

Additionally, insurance rates for everybody could go up if healthy people can no longer afford to purchase insurance, leaving more sick people in the insurance market, and likely raising premiums for everybody.

So is this just a lawsuit to take health insurance away from poor people and make health care more expensive?

Well, the plaintiffs would argue that the lawsuit’s goal is to lower federal spending on health care, which it would certainly accomplish. But it would accomplish this solely by taking away health care tax credits for poor people, and the result is that health care could become more expensive. So, umm, yes.