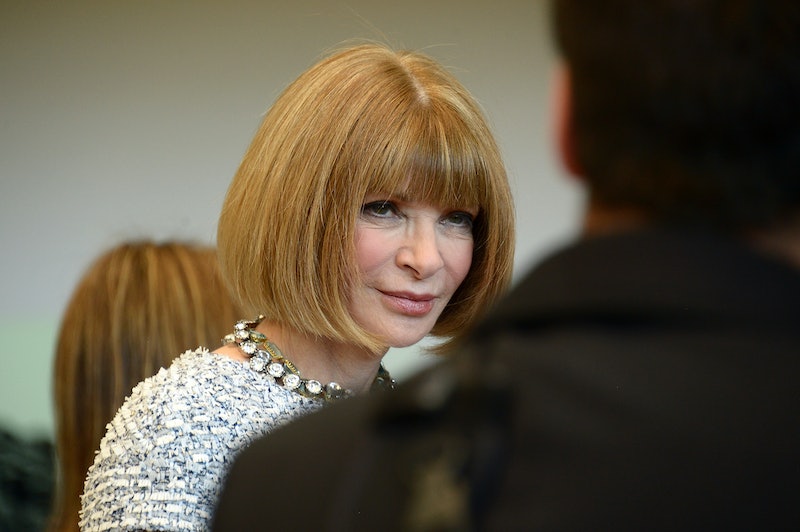 Recently there has been a bit of confusion as to the true definition of feminism. Though many have weighed in already, may I suggest we look to the women of fashion for a little input?

A tense relationship between fashion and feminism has existed for decades. What a woman decides to wear on her back and what society can infer from her choice is a struggle across the board. Can a female CEO be taken seriously in ruffles? Can a woman wearing a pair of Louboutins stomp the election trail and win the presidency? Will sitting for Vogue magazine be a step backward for myself and female kind? After all, fashion is a frivolity meant only for those too vapid to care about more important things, right?

Um, no. Some of the most powerful women in the world, both in fashion and outside, unapologetically dress beautifully, care about style, and wield it as they see fit. Their right to do so fits perfectly within the feminist ideal of equal treatment and equal choice for all. Though many may think the fashion industry is partly responsible for the state of the world and the women working in fashion to be the Benedict Arnolds of the cause, the evidence shows that these women get it and are doing their part.

And to prove my point, I turn to the most powerful women in fashion, many of which may not self-identify as feminist, but definitely talk the talk.

They are what female empowerment looks like and they look good.

"My biggest challenge every day is to be a great mother and a great businesswoman."

And yes you can be both.

Every woman can create the life she wants.

"I'd like to be with an interesting man who is understanding about having a busy partner."

Find a partner who supports you as much as you support them.

"Clothes aren't going to change the world. The women who wear them will."

Our power lies within, no matter what we wear on the outside.

"It’s about improving the majority, not trying to support the minority. That’s what it’s about for me...I’m not here to put anybody down. I’m here to bring everybody up."

Though Hardison works primarily for ethnic diversity in fashion, this quote still rings true for what feminism is really about.

"I love that feeling of, you know, we are women, we are so different, our imperfections are what make us unique and beautiful."

Gisele has had more than a few gaffes, but here she gets it right.

#banbossy... or maybe we just reclaim it.

"I've always been about the power of a woman - accentuating the positive, deleting the negative, whether you're talking her body, her voice or her leadership."

"The notion that a contemporary woman must look mannish in order to be taken seriously as a seeker of power is frankly dismaying."

Femininity and success are not mutually exclusive.

"The most courageous act is still to think for yourself. Aloud."

Your voice matters and should be heard.

"The older I get, and the more collections I do, the more I'm driven by real style and beauty. My aim is to reveal and not to display women."

Clothing should accentuate, not put a woman on display.

"I don't think about it in terms of being a woman. Being gracious, attentive, curious, interested are requirements for everyone. As much as the people in this room are being honored for being a woman, I think what they’re being honored for is what they’ve done. I would look forward to the day when there's no differentiation. It’s about what you do."

More like this
Here's How To Practice Self-Love In Small Ways Every Day
By Mackenzie Sylvester
How Sunnies Face Is Championing Filipino Beauty
By Kristin Corpuz
How This Founder Manifested Ariana Grande As A Brand Ambassador
By Dominique Norman
Of The Best-Selling Fashion On Amazon, These 50 Finds Are The Most Stylish & Affordable
By Maria Cassano
Get Even More From Bustle — Sign Up For The Newsletter