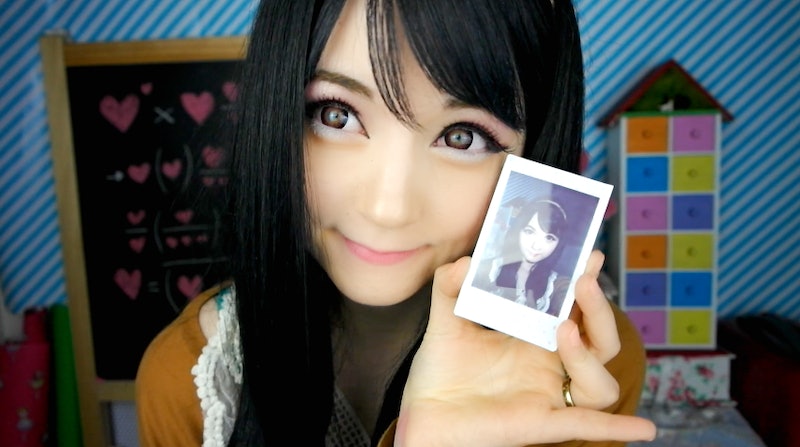 Your ethnicity isn't something you can apply in the morning and remove with a washcloth after a long day — but one Youtuber who goes by the name VenusAngelic doesn't seem to have gotten the memo. If the name VenusAngelic sounds familiar to you, it's probably because she has a fan page on Facebook with over 200,000 Likes, almost 500,000 subscribers on Youtube, and over 80 million Youtube views in total. She's a white, 17-year-old South London native who is famous for looking and dressing like a doll. And just last week, VenusAngelic posted a video entitled "How To Look Half Japanese."

"Looking half-Japanese is the new fashionable trend in Japan," the video begins. VenusAngelic, or Venus Isabelle Palermo, attributes the rise in a desire to look "haafu kao" or "half-face/bi-racial" to the increase in half-Japanese celebrities. The trend is so pervasive in Japanese culture that fashion magazines even feature tutorials on how to look less Japanese and more "bi-racial."

Of course, there is no issue with celebrating the fact the biracial people are beautiful. The problem arises when that appreciation crosses a boundary into yellowface. This particular VenusAngelic video helps to perpetuate an internalized adoration for a "whiter and lighter" standard of beauty that some Asian women have. Some of Venus' fanbase stood up to defend her, while some couldn't recognize the Swiss-born native wasn't actually Japanese.

People doing their makeup to appear half-Japanese is not only problematic — it's racist. If this video was entitled 'How To Look Like A Black Girl,' people would (I hope and assume) be outraged. But it seems some people don't understand that having an appreciation for asian culture does not give you license to mimic them by turning their ethnicity into a makeup-produced mask.

The video speaks for itself.

Venus certainly isn't the only Youtube user participating in the trend. Others have dabbled in these offensive makeup tutorials as well.

Youtuber NatsuOkamiTips made sure this video featured a disclaimer prior to the tutorial:

"...just a little heads up before you watch this video, remember that you are beautiful no matter what you are whether you're white, black, blue, purple, or green, you are beautiful. So just remember that while watching this video... I might get comments saying "oh this is racist, you can't put videos like this up" but, seriously guys, it doesn't matter. It's not racist. I have talked to Asian people and they've told me that it's really stupid that I even have to ask if it was racist because it's really not."

(A general rule of thumb: Nine times out of 10 if you have to ask someone of a certain race if something is racist, it probably is.)

I could list video after video, and of course, this trend extends beyond YouTube makeup tutorials. Only recently, CBS released an extremely offensive episode of How I Met Your Mother in which cast members Alyson Hannigan, Josh Radnor, and Colbie Smulders dressed up in silk robes and spoke with stereotypical asian accents.

What all of these videos represent is a modern form of Orientalism. Edward Said, a post-colonial theorist and author, defined Orientalism as "a way of seeing that imagines, emphasizes, exaggerates and distorts differences of Arab peoples and cultures as compared to that of Europe and the U.S." This concept also references the fetishization and faux-exoticism surrounding asian culture. These tutorials, and their creators, are minimizing an ethnicity and parodying it as a mask. Clearly, we need a lesson on the difference between appreciation and appropriation.

Appreciation is defined as an "an expression of admiration, approval, or gratitude." So appreciation would be expressing a love for Japanese food and opening a Japanese-inspired restaurant. Or, for example, if you're really into K-Pop music, you could do your makeup similar to the way your favorite K-Pop star does it. But you wouldn't change your skin color or distort your facial features to "look more asian."

Appropriation is defined as "the use of pre-existing ideas, images, or objects with little or no transformation applied to them." Appropriation is speaking with an exaggerated fake Japanese accent, doing your makeup to make you "appear more Japanese," and mimicking behavior/mannerisms that you attribute to asian people.

Asian people may not be stopped and frisked or followed around department stores as often as black people are, but that does not give people the right to perpetuate reductive stereotypes about them. Prank calls using asian voices, pulling your eyes to make them "look more Asian," and these types of "How to Look [INSERT RACE HERE]" makeup tutorials need to stop.

Because no matter your race or foundation shade, appropriation is never beautiful.