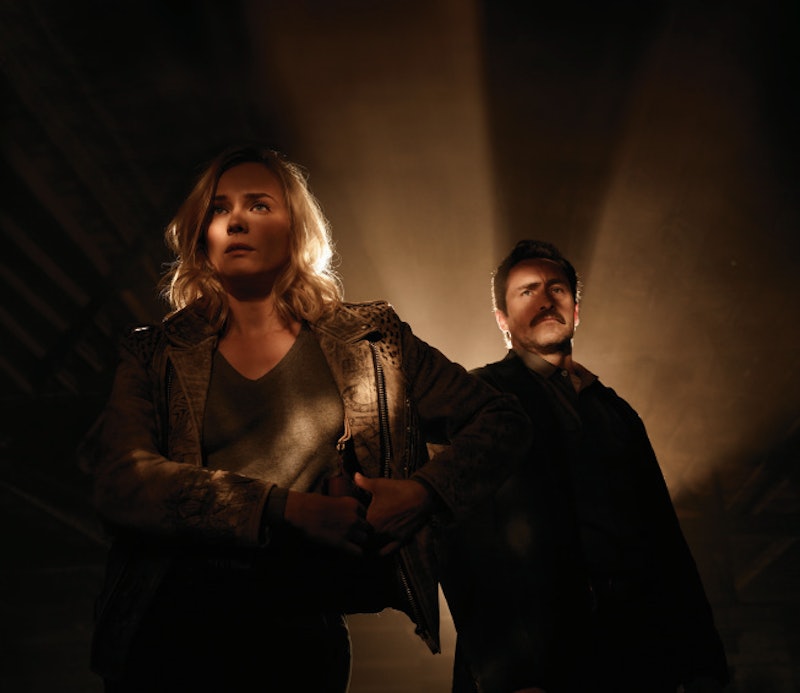 The second season of FX’s drama The Bridge explores the tenuous partnership between a US and a Mexican police detective as they investigate crimes that reach across the border between them. The fabulous Diane Kruger plays Sonya Cross, an El Paso detective who is good at her job but often struggles to connect with her emotions because of her Asbergers. Demian Bichir grounds the Mexican side as Marco Ruiz, an equally devoted detective who tries and fails to keep his family safe from the corruption of Ciudad Juarez.

While the first season focused on Sonya and Marco hunting a politically minded murderer who crossed between both countries to make a point about American indifference to Mexican suffering, showrunner Elwood Reid no longer wants to take on the serial killer genre. Instead, Season 2 of the series has shifted towards more routine cases, the fallout of Marco's familial drama, and Jim Dobbs’ personal connection to Sonya — he killed her sister, but she’s deeply attracted to his brother.

But that means we lose "The Beast," the social justice murderer who kidnaps a high profile white judge to contrast her with the nameless, faceless women who disappear into Juarez’s sex and drug rings. His opening screed proclaims, "Five die per year in El Paso, thousands in Juarez." Even though its expressed through violent, grisly killings, he has a real point, and so does The Bridge, which draws on a lot of real facts about the Bridge of the Americas to fuel its drama. Here are seven ways The Bridge takes its inspiration from real border politics:

El Paso has been routinely rated of the the safest cities in America with some of the lowest crime rates. Juarez, by contrast, was once the murder capital of Mexico (a country that suffers a great deal of homicides) and over the past five years more than 10,000 were killed.

2. But Juarez Is Just Slowly Improving

It makes sense that the mysterious message was recorded back in 2010, because Ciuadad Juarez is slowly starting to turn around and hopefully clean up its streets.

With drugs like marijuana becoming normalized here in America, it's easy to forget that the drug trade is still ravaging many areas around the world. Mexican cartels, even ones that are shrinking, still hold a lot of power and some are even recruiting American soldiers to do their contract killings.

4. The Border Is More Fluid Than You'd Assume

One of the most surprising images from The Bridge's first season were the long line of women and men who go to US to work each day and return to Mexico at night. But it makes sense — for many, they simply want to work and make money, not leave their country. While Ciudad Juarez can be dangerous, it is also home to over a million people. Special visas can be obtained for legal workers like Adriana or students like Marco's son, Gus.

The passageway Charlotte's husband used to smuggle in illegal immigrants could be based on the rumors that there is a whole network of tunnels that run underneath the city. It's the type of story conspiracy theorists believe while most believe the tunnels are defunct and falling apart, but that's exactly what a smuggler like Graciela like would want everyone to believe...

6. There Are Actual Serial Killers In El Paso

For its low crime rates, El Paso has a surprising number of serial killers that are either from or active in the area. But none have used ritual killing as a chance to send socio-political messages or extort wealthy Texans.

7. …And Even More in Juarez

Ciudad Juarez, with its high rate of civilian murders, has left many suspected mass and serial killers on the streets. With so many cases open, patterns and habits that might stand out get ignored. If the show feels the need to return to a serial killer story, it might be more interesting from the Mexican side, with Marcus needing Sonya's help. Sonya would never let those details pass her by.