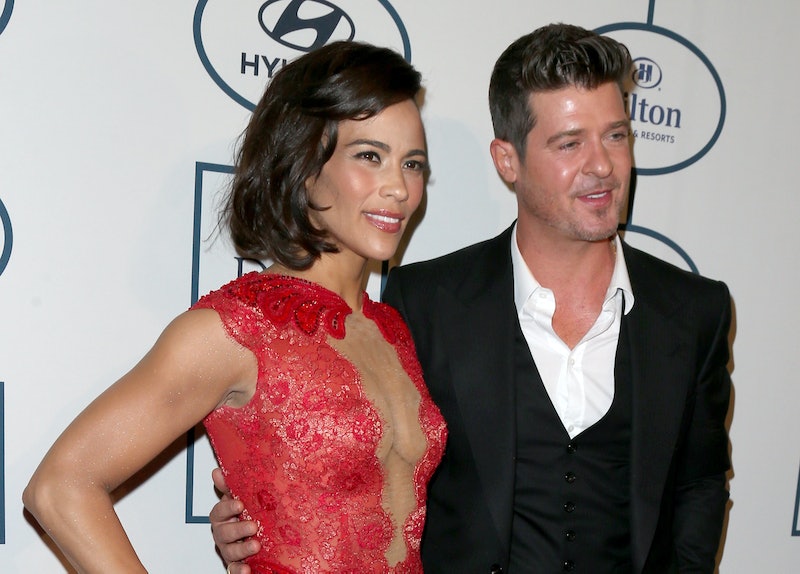 We've seen all the signs that all was not healing well in paradise, but this feels like the end of an era. There isn't a person on the planet who hasn't been aware that Robin Thicke has been trying to reconcile with Paula Patton, mainly because the way he has chosen to go about it involves naming an entire album after her and going on a huge attention-seeking publicity tour to let the world (and Patton) know how sad he is to have lost her. While the rest of us may find this creepy and probably the least effective way to get someone to come back to you ever, there was no hint as to whether Patton agreed or disagreed with our assessment. However, Robin Thicke and Paula Patton's home is for sale now, which doesn't bode well for Thicke's campaign.

Of course, Thicke admitted during a radio interview that Patton had not listened to the entirety of Paula and that they hadn't seen each other in four months. It was already clear that Paula Patton was not having it just as much, if not more so, than the rest of the world. The fact that their Bel-Air home officially went on the market on Monday is pretty much the end of an era. Thicke and Patton are separated, they haven't seen each other in four months, and now the place they used to live in as man and wife is about to be reduced to a price tag.

On the one hand, this could actually be a good thing. After all, it's kind of an understatement to say that Robin Thicke is coming on a little strong. Patton needs distance and time away from him, none of which she can get when his Paula publicity campaign has all eyes on her and the pressure is at an all time high. Having anything that ties her to him — not including Paula and the 54 copies it sold in Australia — is really just stunting her growth as an individual. Whatever issue drove her to her separation from Thicke isn't going to be fixed by remaining so entangled with him that they technically share a home.

On the other hand, this could also be the hint that Thicke needs to, well, leave Paula Patton alone. If he hadn't gotten the hint that the world doesn't support his Get Her Back campaign as much as he might have hoped, then the loss of what MTV describes as their "love nest" should be the biggest hint hint ever given. Now that Paula is out there and none of us can un-hear it, isn't it time that Thicke also works on himself as an individual? Even if he and Patton do end up back together, it won't be the same as it's been, so letting go of the past is integral to accepting that.

For those with the money to burn, Patton and Thicke's home is going for an asking price of $2,985,000. (Which is probably more money than Paula has made so far. Sorry, sorry, I couldn't resist.)