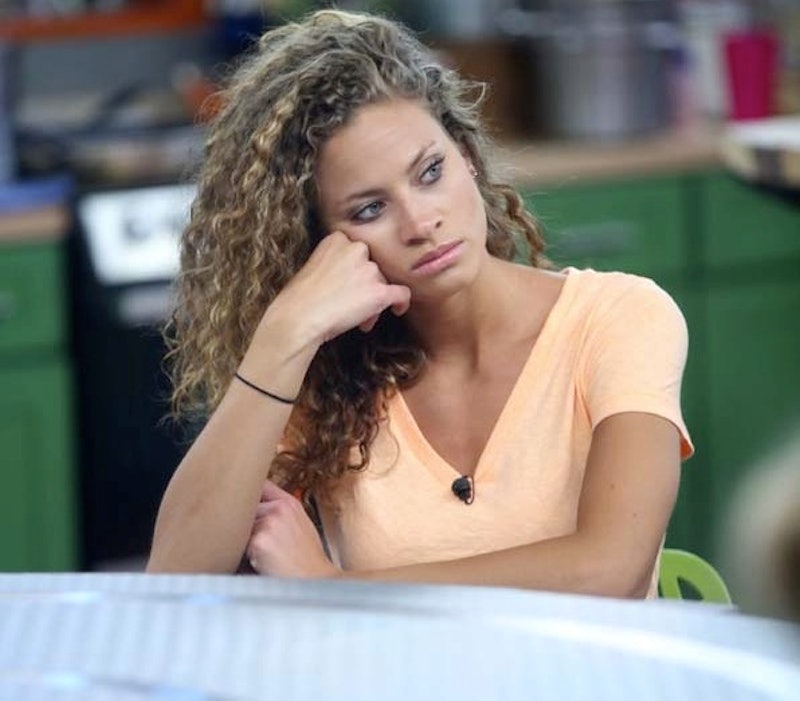 When most people want to go out with someone, they ask that person and wait for them to respond. When Caleb Reynolds from Big Brother wants to go out with someone, in this case Amber Borzotra, he asks her repeatedly, ignores her refusals, and then plans a date without her knowledge. I repeat: Caleb planned a date for him and Amber without her knowledge and then peer pressured her into accepting. Are there any Caleb and Amber hopefuls left in the audience at this point?

Tuesday night was a joyous occasion in the Big Brother house because the guests had been provided with something they had been asking for pretty much since they arrived: alcohol. Earlier that day, Caleb and Amber had gotten onto the subject of their least favorite foods (bananas for Amber and pickles for Caleb) and Caleb ended up eating a pickle for the chance to have a date with Amber. Caleb even described an elaborate date for Amber and himself outside of the house, which she could have become a reality if only she would eat a banana in return. Amber refused.

Somehow, Caleb took this as a green light to spend all day setting up for the date he'd "won" with Amber in the backyard of the Big Brother house. Here's how it went down.

The rest of the guests spent most of their time whispering about how sad and pathetic this was and how they couldn't believe Caleb still wasn't getting the blatant hint that Amber would never be interested in him. Somehow that didn't stop anyone from enabling his behavior. In fact, Caleb sent Nicole to distract Amber while he set everything up and then bring Amber to the room where Caleb was waiting right in front of everyone to ask her to join him outside.

This left Amber with two choices. Either she could maintain her refusal and have Caleb once again target her, even more so now that she had "humiliated him" in front of the whole house, or she can throw him a bone and say yes to appease him for now. Guess which one was the better option for her game?

To say that the date was awkward would be an understatement. Caleb still wouldn't let up on his genuine belief that Amber is totally into him, you guys. It got to the point where Amber acknowledged out loud, likely with a mingling sense of wonder and dread, "You are never going to give up, are you?"

Amber admitted to the other house guests that she had viewed the "date" as more like a conversation and that she still didn't feel any fonder of Caleb than she had before. In fact, she probably feels less fond of him with every passing day. Those weren't her words, but it's kind of hard to imagine that she's got any wells of affection left for him considering she can barely breathe around him in the house. Naturally, the other house guests are already talking about how "fake" Amber is and how she only follows Cody around to annoy Caleb, because she doesn't like Caleb but does like his attention. Thanks again, Caleb.

And how does Caleb view their date? It was the best night of his life, obviously. Caleb's perception of the world seems to differ from the reality, because he misinterpreted just about every single thing that Amber said. The most egregious example was when Amber said, "You are something. These Kentucky boys. Can't ever get away from them," and Caleb recounted the moment later to Frankie as, "'Gosh, you Kentucky boys really know the right things to say.'"

Caleb is back to believing that Amber is just keeping her true feelings for him under wraps until they get a little more privacy and Amber is back to having to work around Caleb's feelings to avoid jeopardizing her standing in the house. Will any of this actually end up on the CBS broadcast so everyone knows just how big of a creep Caleb is? Probably not.