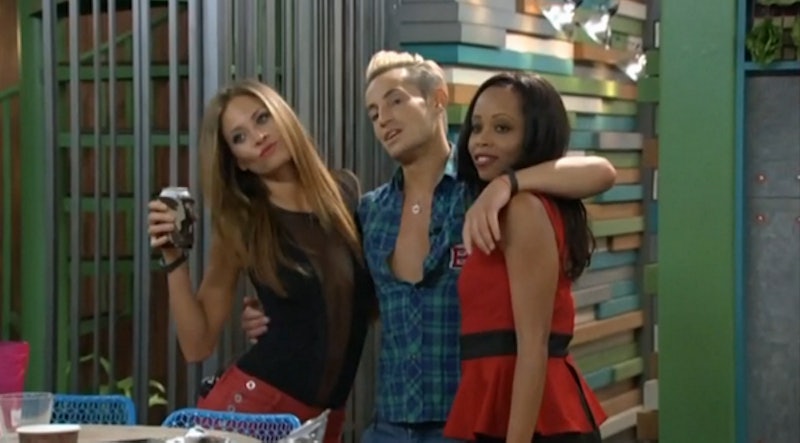 Remember when Joey realized she was going to go home, so she decided to go out with a bang? That was how we all met Joey's male alter ego Alex, who bewildered, amused, and scared the house guests, but also formed one of the more exciting moments of Big Brother's season 16. It turns out that Joey isn't the only Big Brother house guest with an alter ego. Frankie Grande has a straight alter ego named Frank and Frank took center stage on Tuesday, especially once the alcohol started flowing freely. To the surprise of no one, Frank was a bigger hit with the ladies than any of the other guys in the house.

Say what you want about Frankie, but it's hard to deny that he's charming as all hell. In fact, he's so charming that he got to kiss Amber before Caleb or Cody did. Admittedly, Caleb's chances of kissing Amber at all are permanently set on "ew" and Cody might have a better chance with her if he wasn't so scared of incurring Caleb's wrath, but "Frank" apparently feared no such thing. Long before the Big Brother guests ever got their hands on the booze, Frankie was planting one on Amber in the backyard.

That, for those who are keeping score, marked the second Big Brother hook up since Hayden and Nicole finally kissed and got their showmance on the road. Frank and Amber might not count as a showmance, but that doesn't change the fact that the second kiss of the season went to Frankie Grande. Luckily for us, Frank didn't stop there. Later, while the house guests were in the kitchen popping bottles, Victoria admitted that if she could kiss any guy out there right now then it would be Frank.

Who was Frank to disappoint her? Besides, you know, fictional in a vaguely Tyler Durden kind of way.

In between Victoria's first and second kiss with Frank, Brittany also got in on the action. Why? Well, the better question here would be why not? Frankie might simultaneously be the most loved and most hated guest in the Big Brother house, but he's probably a really good kisser.

Fans of Zankie need not worry that Frankie's serial kissing has thrown a wrench in that showmance. Not even two hours after kissing Amber, Frankie was kissing Zach on the cheek. In fact, Zach seemed to find the whole night hilarious and joked that Victoria "wants [Frankie] so bad". Of course, Zach and Frankie aren't actually a couple and thus it would have been a little bizarre for Zach to be jealous in the first place when he could probably kiss Frankie any time he wanted to, but it's still good to know that we don't have to worry about America's favorite showmance/bromance/whatevermance, right?

Whether or not this is the last we've seen of Frank still remains to be seen, but one thing is for certain: Frankie has officially gotten more action than all the other guys in the house put together. Maybe they should start coming to him for tips to how to get the girls to notice them. Except Caleb, of course.