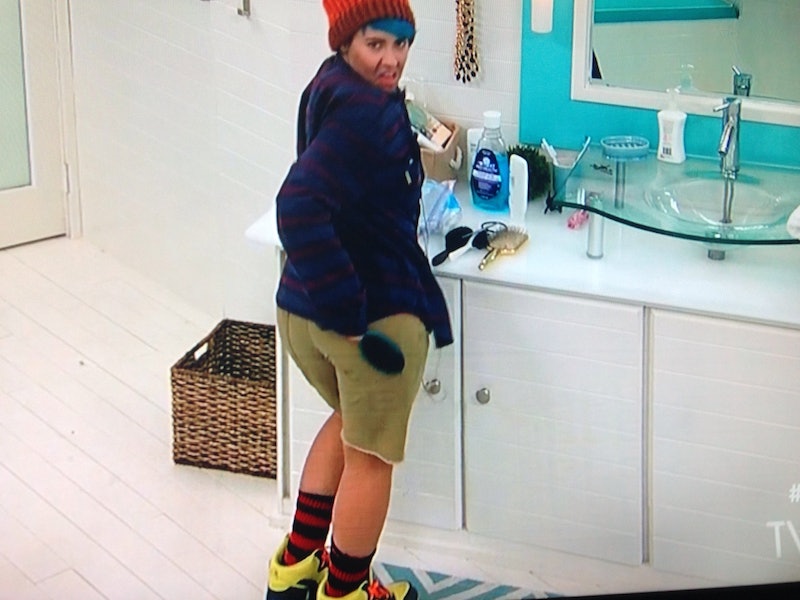 Ever since Big Brother contestant Joey Van Pelt found out that she could get cut, she hasn't been taking it well. In fact, she's been taking it oddly. There are lots of ways to deal with the very real threat of being evicted from the Big Brother house, but most people don't chose to adopt a muscle head alter ego named Alex and start harassing people for votes. Yet, somehow, on Tuesday afternoon, that's exactly what happened in the Big Brother house, much to the confusion of the other house guests. Joey disappeared and Alex strutted out in her place.

With her face smeared with dirt that was probably meant to emulate stubble, an orange beanie, a flannel shirt, and khaki shorts, Alex swaggered into the house and made a beeline for all of the guests. She first interrupted a small meeting that Caleb was having with Christine and Zach, introducing her new persona in a fairly memorable speech that summed up what Alex was all about.

"You're afraid of the power in this house now?" Joey yelled as Alex. "You've never met Alex before. I've got big-ass balls and, remember, I want to stay in this house. I got big balls, I like to weight lift, I like to do all kinds of shit that guys like to do. Fucking vote for me."

That was just the beginning of a bizarre and lengthy improv routine that really seemed to hurt Joey's place in the house more than it helped. As entertaining as it was for us to watch, it didn't seem anywhere near as amusing for the other house guests. The most positive reaction to Joey's antics was outright confusion. The less positive reactions ranged from dismissal to outright annoyance.

Joey may have had nothing to lose by pretending to be a guy named Alex, but she certainly didn't gain anything by doing it either. So what was the point? Joey still believed that she had a shot at staying in the competition and, after making the switch from Alex back to Joey, she reaffirmed that she just needed to "get that off my chest". It seems so abrupt that Joey has gone from being the first member of Team America to being the person most likely to be booted out of the house. What happened?

1. She really needs a break.

Maybe this isn't normal behavior for her and that's the whole problem. It's possible that everything got to be a bit too much for Joey and she was having some sort of mental breakdown. It's easy to criticize her actions from the outside, but Joey could have a genuine problem. In that event, leaving the house would be the best thing for her so that she can get the help that she needs.

2. It was a Team America Task.

Maybe it was a strategy, as she claimed. From the way people on Twitter have been responding, it seems unlikely that her behavior was a literal interpretation of a Team America task, but maybe they gave her an idea and she ran with it in a new direction. The task could have been "Think Like a Man Too" in honor of the movie or "Find a creative way to alarm your house guests." It doesn't get much more creative than Alex.

3. She needed to relieve some tension.

Being trapped in a house with the same people with no access to your phone or a television or the Internet is hard enough, even without the house turning against you the way they have against Joey. Joey may have known that she was going to get booted either way and felt like releasing tension in a very Joey-like way. We haven't known Joey for long enough to know whether or not this is normal behavior for her.

4. She was genuinely trying to be funny.

From her blue hair to the fact that she went streaking in a thong, Joey pretty much gives off the impression of being an exuberant and random kind of person. Just like Nicki Minaj liked to switch between personas on stage and talk about them like they were real people, so too could Joey like to do the same thing. Why should we love Nicki Minaj for doing it and hate Joey for doing it? No matter what you think of her or Alex, at least it was memorable.

More like this
The 'Big Brother 24' Racism & Bullying Controversy, Explained
By Jake Viswanath
Everything You Need To Know About The 'Big Brother' Reboot
By El Hunt and Maxine Harrison
Twitter Is In Meltdown Over The Confirmed Return Of 'Big Brother'
By Sophie McEvoy
Kim Kardashian & Pete Davidson’s Relationship Timeline From Start To Finish
By Jordyn Tilchen and Bustle Editors
Get Even More From Bustle — Sign Up For The Newsletter