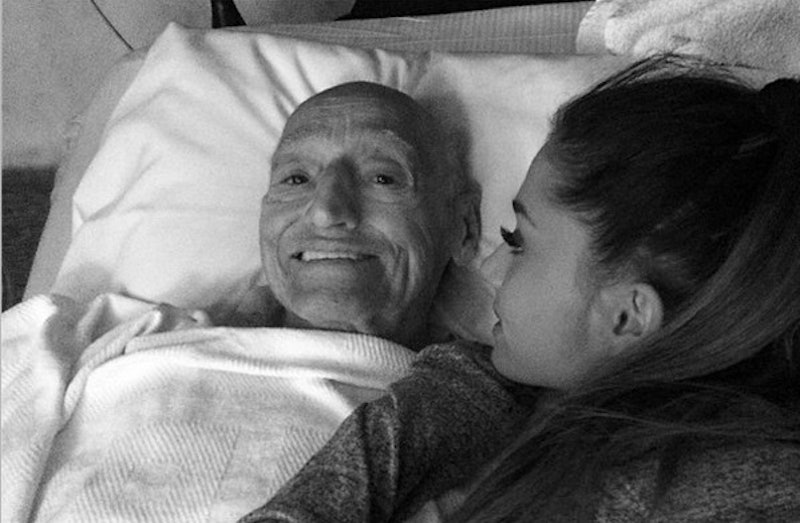 The moment every Arianator has been dreading finally happened. Ariana Grande's grandfather passed away on Tuesday following a lengthy battle with cancer. Grandpa Grande, as the fans affectionately call him, has been the subject of many Twitter trends of support in recent months, especially after Grande cancelled her promotional work in early July to rush to her grandfather's side over Independence Day weekend. Grande has always been an unabashed family girl at heart and her relationship with her grandparents has always been so close that it's truly a testament to her strength that she is able to tweet so soon after losing such an important member of her family.

Grandpa Grande, who had a Twitter of his own, has always been supportive of Grande's career. His Twitter only has 23 tweets on it, but nearly every single one of them is devoted to some kind of praise or reference to his granddaughter Ariana. His third tweet, which was posted in February 2013, reads, "Getting very excited for my granddaughters music video. I'm sure you all will love it" and his last tweet, which was posted in March 2013, reads, "So happy and excited for you all to hear The Way by my beautiful granddaughter. You will love it. I'm positive!" He also seems to share Ariana Grande's love for emojis in his tweets, his favorite being the blushing smilie face.

Grande herself made the announcement of her grandfather's passing via Twitter on Wednesday. "Thank you for your continuous love and light over the past few weeks. We did lose my favorite person to ever exist yesterday, my grandpa," she tweeted. "If only y'all knew how amazing he was. My heart hurts so much. It's beyond broken, but I got to hold his hand and watch him find his peace. This is the hardest thing imaginable but I'm so grateful that I got to spend this time with him and my family, taking care of him and loving him. We thank you so much for the continuous love."

The love between Ariana Grande and her grandfather obviously runs both ways. Her Twitter is rife with references to him, from "wish you knew how incredible he is... humble, respectful, hardworking, polite, thoughtful, humorous, generous" to agreeing with a fan who called Grandpa Grande their idol. She got a tattoo in March 2014 of the word bellissima, which she explained is her grandfather's nickname for her. Even a glance through her Instagram reveals a world of pictures and videos of Grande spending time with her grandparents.

She also posted pictures of her Fourth of July weekend at the hospital with her grandfather, showing how she was keeping his spirits up and how strong he was being even as he was lying there in bed.

Grandpa Grande leaves behind his wife, whom Grande affectionately refers to as "Nonna", Grande herself and her parents, as well as Frankie Grande who is currently in the Big Brother house and unlikely to have heard the news yet. As for Ariana Grande, well, it's like she lost her best friend, her biggest support, and her heart all at the same time, if her tweets both present and past are anything to go by.

She'll need the support of her fans now more than ever and they've already risen to the occasion by trending Grandpa Grande and #RIPGrandpaGrande on Twitter barely an hour after Grande made the announcement. Our hearts go out to the entire Grande family during this difficult time.

More like this
Jennifer Coolidge Slid Into Ariana Grande’s DMs In The Most Iconic Way
By El Hunt
Ariana Grande Just Wore The Chunkiest Knit Sweater I've Ever Seen
By Dominique Norman
Twitter Is In Awe Of Taylor Swift’s “Lavender Haze” Music Video
By Jake Viswanath
Jennifer Coolidge Hunted For Jewels & Lashes In J.Lo’s Hotel Room
By Jake Viswanath
Get Even More From Bustle — Sign Up For The Newsletter
From hair trends to relationship advice, our daily newsletter has everything you need to sound like a person who’s on TikTok, even if you aren’t.