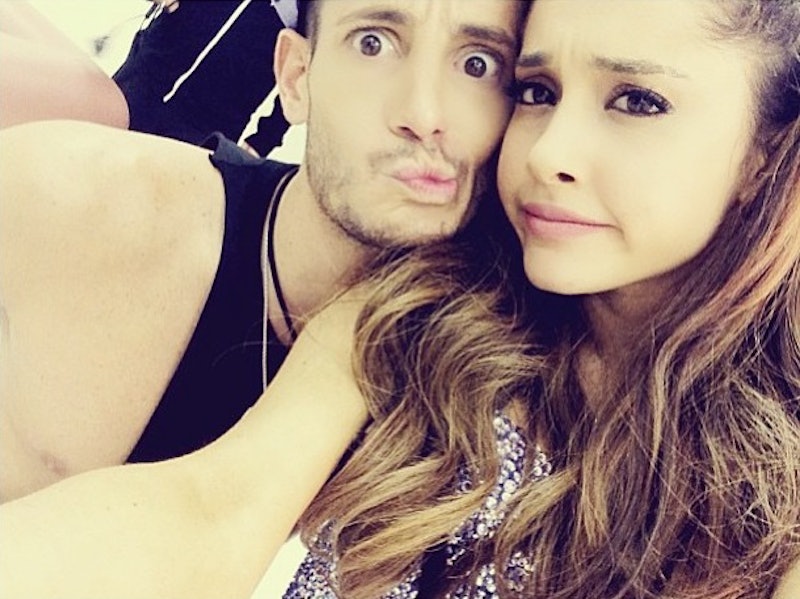 Ariana Grande's an adorable pop star who's steadily on the rise thanks to a solid acting career and one album under her belt, with another on the way. With hit songs like "Right There" featuring Big Sean and the chart-topping "Problem" with Iggy Azalea, as well as her latest single "Break Free," Grande's powerhouse vocals have earned her comparisons to Mariah Carey. In case that's not enough reasons to love her, here's another one—her awesome relationship with her brother Frankie. Frankie Grande is on Big Brother 16, and he's, simply put, the best.

Aside from Frankie being featured on Big Brother, he can also count having the best bangs ever and serving the most fierce duck lips I've ever seen among his accomplishments. The undeniable love he and Ariana have for one another oozes out of all the sentimental photos the super chummy brother and sister share on social media.

Ariana and Frankie have some of the cutest moments — not in a grandmother pinching your cheeks kinda way, but in a way that makes a brotherless child like me hope that if I had a brother, our relationship could be half as adorable as the one the Grande siblings have.

As far as we can tell, there's no fighting over who owns the spotlight. They both obviously realize there's plenty enough public adoration to go around for the both of them.

If you're still not convinced, here a few of Ariana and Frankie's cutest moments that are guaranteed to make you say, "Awwww!!!":

1. WHEN THEY WATCHED THE VIDEO FOR "PROBLEM" TOGETHER FOR THE FIRST TIME.

In accordance with the unwritten rule on sibling relationships that says there's no way you can love everything your brother does, so it's no shocker that Ariana appeared to be annoyed by Frankie's excitement, but even that moment was cute! Anyway, who's she kidding? It's obvious she loves her big bro to pieces.

2. THE TIME THEY DANCED TO "GANGNAM STYLE."

And she wasn't even mad that Frankie totally outdanced her.

3. WHEN ARIANA PERFORMED AT THE WHITE HOUSE.

The siblings looked totally adorable when Frankie accompanied Ariana to Michelle Obama's Women in Soul concert in March, but this moment would earn a 10 on the cuteness scale anytime of year.

4. WHEN THEY CELEBRATED NEW YEAR'S TOGETHER WITH FRIENDS IN JAPAN.

Yep, I'm totally feelin' the love here. There's no way to get around sighing in amazement at the cuteness emanating from this photo of a sister who chose to skip out on making out with her boyfriend Jai Brooks at the stroke of midnight so she could ring in a new year with her brother. Sigh.

5. THE TIME THEY WENT TO THE BEACH.

Obviously, a brother and sister who beach-hop together, stay together.

6. WHEN THEIR ENTIRE FAMILY POSED FOR A SELFIE

Obviously, Ariana and Frankie aren't the only ones out the bunch who love the camera. But in this case, that's a good thing.

7. THIS TIME WHEN THEY WERE TOO EFFIN' ADORABLE FOR WORDS.

GAH! Babies are already sweet enough on their own, but this moment right here is the polar opposite of sibling rivalry and the absolute epitome of sibling cuteness.

More like this
What Is Ariana Grande's Net Worth? When It Comes To Money, She Has No “Problem”
By Hugh McIntyre
Britney Has Been Granted A Restraining Order Against Her Ex-Husband
By Bustle Staff
Who Is Betty Who Dating? The Australian Singer Is Married To Her Tour Photographer
By Radhika Menon
Sadie Sink Would Escape Vecna From 'Stranger Things' With This Taylor Swift Song
By Grace Wehniainen
Get Even More From Bustle — Sign Up For The Newsletter